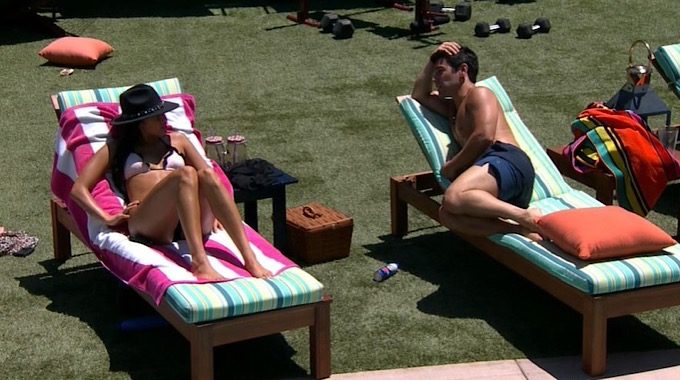 It was a quiet day in the Big Brother house with the HGs just lounging and enjoying the backyard before it closes. There was some talk about who everyone is voting for on Thursday and who might end up being targets going into week 4. Keep reading to get all the details right here!

9:30 AM BBT – Jackson is talking to Bella about the incident yesterday with Christie freaking out about going up. Jackson mentions that he isn’t dealing with people who are freaking out. Jackson says it doesn’t accomplish anything to run around acting like a chicken with your head cut off.

9:50 AM BBT – Cliff is up in the Boat Room doing his Cliff Notes session for the day with Jackson outside working out, David up and roaming and Bella up and around the house. He says hi to his family, he does some shoutouts. and tells them that he is worried a bit about this week’s live vote.

10:07 AM BBT – Bella and Sam are talking about her conversation with Jackson. Sam mentions that Jackson makes him made when he brings Jack coffee before the wake-up call because he always wakes him up.

10:30 AM BBT – Christie wonders if there is going to be a surprise eviction Wednesday because it seems like they rushed everything this week.

10:40 AM BBT – Christie, Holly, Jack, and Analyse are talking in the Archery Room about how Cliff hasn’t campaigned to them yet this week. Christie says that what she is going to say to Nick and Bella after the vote is revealed on why they flipped it. They also talk about not letting Nicole know that she is safe so that she doesn’t get too comfortable.

10:48 AM BBT – Tommy comes in and says he is gunning for the HOH and he wants to BD Sam because he is the brain of Nick and Bella’s game. Christie says that she is going to take out Nick if she wins. Tommy wonders if there is a way to convince Nick and Bella that Cliff needs to go first, they don’t think so and then Nick walks in.

11:00 AM BBT – Christie is confirming with Jackson that she has a power. She tells him what it is and then explains why she told Nick and Bella about it. Christie says that she is worried about Tommy not wanting to send either of them (N&B) home. Jack tells her that he does, but he wants Sam out first.

12:00 PM BBT – All the HGs are lounging around the pool and having general conversations. The HGs are preparing for an outdoor lockdown.

12:35 PM BBT – Holly and Kat are talking about Analyse. Analyse has been telling Nick that she would date him in the real world, she has also told Jackson that she wants to marry him after the show. Kat mentions not liking the energy Analyse brings into the house and how negative she is.

1:20 PM BBT – Tommy and Nicole are talking on the hammock. She is talking about how she is going to campaign to the others. Mentions that if they are all okay with her possibly coming back through Camp Comeback, then they should be okay with her just staying. She also talks about how she feels bad campaigning against Cliff but just has to remind herself that she is campaigning for herself, not against him.

2:18 PM BBT – Holly and Jackson are talking about their game. Jackson tells her that he has a lot of things planned for his game. Holly tells him she is fine with it as long as it doesn’t affect her. Holly feels like she has been a dud all season and needs to do something soon. They talk about Analyse and how the only emotion she has is angry.

3:36 PM BBT – Ovi and David discuss Camp Comeback and how if they were still in the game they wouldn’t ostracizing the people in Camp Comeback. Ovi says they already know what it’s like to be pushed aside in life for being different. Ovi says while looking at the memory walk all the blacked out HGs have one thing in common. David says yep.

3:50 PM BBT – David tells Ovi if he comes back in the game he’s going to com in and chop some heads. He wants to make a big move and stand by it.

4:08 PM BBT – Holly tells Kat she doesn’t trust Jack. Talk then turns to Analyse. Kat says Analyse brings nothing to the table and she thinks she’ll just coast through the game because she’s with Jack. Holly agrees.

6:08 PM BBT – Jack tells Anaylse and Holly that if they win HOH they put up Bella and Nick with Sam as a backdoor option. They then say they tell them that after talking to Nicole things just didn’t add up so they had to go for them.

6:15 PM BBT – Christie, Holly, Jack and Analyse talk about targeting Sam first. Christie says she’s not opposed to it but just doesn’t want it to backfire. Analyse says she doesn’t know about backdooring Sam because she doesn’t like Nick and Bella together.

6:55 PM BBT – Sam and Kemi talk about the powers in the game and what Sam would do if he won HOH. He won’t tell her exactly what he would do.

7:15 PM BBT – Tommy tells Jackson that getting rid of Sam means Bella and Nick have no one but them to turn to so they can use them as numbers. Tommy says Sam could win the game so he’s more afraid of him than Nick and Bella.

7:18 PM BBT – Jackson says if the HOH is endurance it’s his and there’s no one else who can take it from him.

11:15 PM BBT – Kat tells Holly she’s tired of the house votes and thinks they must be boring for the viewers. She thinks maybe they should vote out Cliff instead to mix it up.

11:45 PM BBT – Jack is mixing odd combinations of food and seeing how gross it can smell. He calls HGs in to observe. Cams all go to outside while Ovi runs in the backyard.

12:30 AM BBT – Nicole tells Ovi if it’s a HG vote on who comes back from Camp then she’ll vote for him to return and he can help her go after someone.

1:15 AM BBT – Cliff tells Ovi he worries most about Christie + Jack.

2:25 AM BBT – Kemi talks with Nicole that Jack is arrogant but otherwise likes most everyone in the house.

2:30 AM BBT – Kat snuggles with David in Camp. She expects the returning player to be decided by America’s vote.

3:00 AM BBT – Nicole and Kemi review each of the HGs and share their opinions on who they like and who they don’t.

3:50 AM BBT – Kemi and Nicole are calling it a night. They’re going to keep their distance tomorrow while Nicole works on getting in better with HGs.

Relatively calm day after Monday’s freakout from Christie. Now with the noms set and the plan in motion to evict Cliff there’s not much that needs to be done. One more day to go before our Thursday eviction and Camp Comeback twist resolution. New episode tonight though so that’s something.