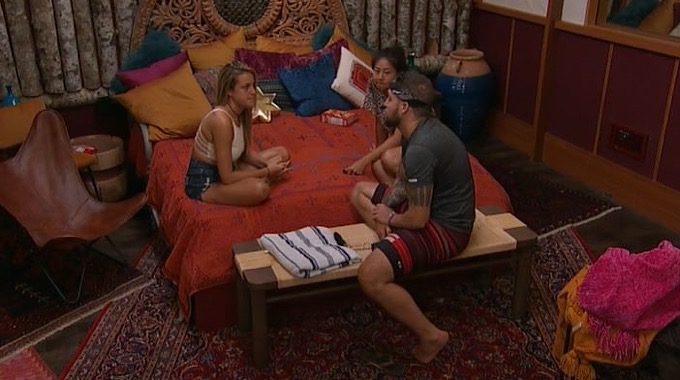 Not that anything surprises us at this point on Big Brother 21, but Christie couldn’t help but tell anyone who would listen about her on the Big Brother live feeds yesterday. Christie had already told Tommy and Jack about her power and then yesterday she might as well have told the whole house about it.

It all started with a complete meltdown after she read way too far into comments made by some of the HGs. She was convinced that Nick and Bella were going to BD her this week. She ultimately pinned it on Kemi who only asked what the plan was for the POV Ceremony after Christie had already been freaking out for almost an hour.

After the POV Ceremony happened Christie was still convinced that she dodged a bullet and that they planned to BD her, but then proceeded to go upstairs to the HOH room (2:42 PM BBT cams 3 and 4). She told Nick and Bella all about her power but had the details confused. She also told them that Ovi has the first power and that Jack and Jackson know all the details.

She later went to the DR and they apparently explained the details of the power again and she went back to Nick and Bella to clarify the correct details of her power. Christie told Sam all about her power, Analyse told Jackson about it, and Holly also knows about her power.

The Panic Power gives her the ability to upgrade the Golden Power of Veto to the Diamond Power of Veto. This means if she activates the Panic Power, the Diamond Veto will allow the Veto holder to not only remove someone off the block, but they will be able to choose the replacement nominee, not the HOH. This power is good for four POV Ceremonies.

Which means that Christie will not be picking the renom unless she is the one who wins the POV. She could have anonymously given the Panic Power to whoever wins the POV that week, but now half the house knows. What do you think about Christie’s decision to out her power to half the house?