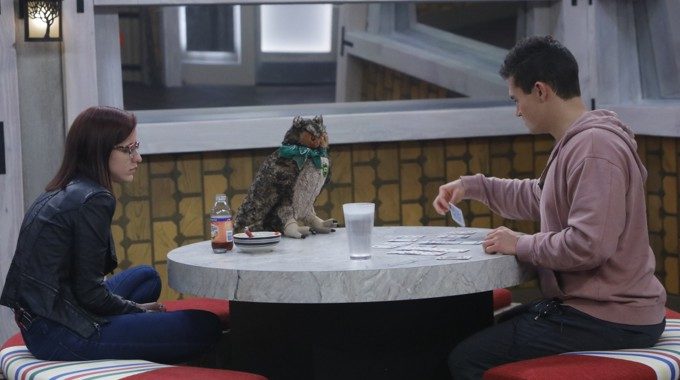 Jackson made a big move at the Final 5 for Big Brother 21 by constructing a clever lie against Tommy to frame him as a backstabber against Nicole and Cliff. He managed to save his showmance and see Tommy evicted over Holly that week. He held that secret between him and Holly until last night.

“Oh, side note, because you obviously will find out about it,” starts Jackson. “Tommy and I never had that conversation.” “Dammit!” laughs Nicole. “I knew it,” she adds.

Jackson goes on to explain he was up in the HOH room and saw Tommy go in the HN room to join Cliff and Nicole so he put on his socks and snuck in the hallway to listen in on the conversation. “[I] spun it to use against him.” “Well done, sir,” Nicole congratulates Jackson. Funny to think if Tommy had taken Cliff and Nicole to the back bedroom or Lounge we might not have had that whole scenario play out.

He goes on to explain he had nothing to lose and thought he could tell Nicole was wavering. Nicole suggests he hadn’t really fooled her. “I knew you were full of s**t because in the kitchen… I just knew. I’ve seen angry Michie.” Nicole wasn’t convinced because Jackson wasn’t blowing his lid or slamming doors like we’ve seen him do when he gets upset. It was a good observation of her but would have been a better observation if she had done something about that!

Jackson goes on to say he didn’t think he had to convince her and Cliff, just create enough doubt in their minds about Tommy’s trustworthiness. Nicole admits that part did work and Tommy’s avoidance later was enough to sway her. Yep, it worked.

We’ll never know how things would have worked out if Tommy had stayed over Holly but we sure know that Holly wouldn’t have been around to win Round 2 like she just did, formally shutting out Nicole from F2. Unless Holly changes her mind… nah.

What do you think of Jackson’s decision to reveal his big lie to Nicole? Is he trying to impress her with his sneakiness ahead of her Jury vote or was he looking to cut off a potentially upsetting, inevitable reveal when she gets to the Big Brother Jury house? What’s your take?