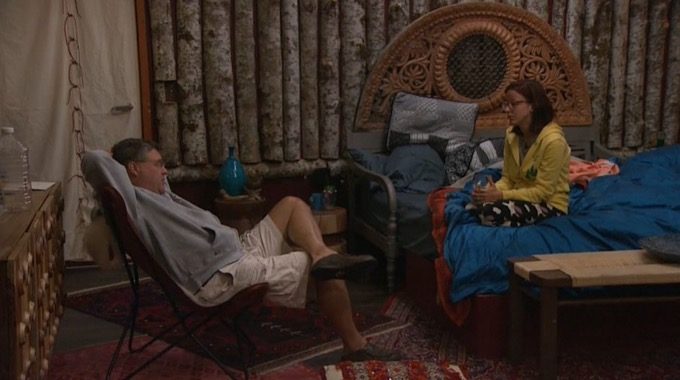 It was a slow morning with the Big Brother 21 houseguests taking their time getting out of bed this morning, but we did get some talk about what the rest of this week could look like. As we know, the Veto Meeting is delayed until Thursday’s live show, but Cliff knows that he will end up on the block and he continued to work out the details of his campaign. Will it make a difference?

12:05 PM BBT – Cliff is up in the HOH room talking about how Jackson kept telling him that the deal was still on until the POV comp happened, then all of a sudden everything was different. Compares it to buying a car, signing a contract and then deciding days later you don’t want it rather than while you’re sitting at the dealership.

12:20 PM BBT – Cliff is still talking about how hard it was for him to sleep when he thought about going against his word to Jackson last week. He says that he knows that people might think he’s a fool for that and he isn’t going to say they are wrong. However, he is dealing with real people, with real dreams, and real emotions.

12:25 PM BBT – Cliff mentions that if he is evicted, he will make sure everyone in the Jury house hears the story about how this week went. He says that he can tell a story and feels his words hold some weight.

12:35 PM BBT – Cliff talks about how the game would be so much easier if he had contact with the outside world to find out what’s going on outside the house. He also talks about how he thinks he would have been safe if they had the eviction right after the POV comp, it’s when they have all this downtime to plot and scheme that changes things.

1:24 PM BBT – Jackson and Holly are talking in bed. Jackson tells Holly about his conversation with Nicole last night and how Cliff just wants finale night and how he is always talking about how sorry he is that his wife won’t be there. He tells her how Nicole offered to throw HOH comps to make sure that Jackson is in one of those F2 seats. He tells her that he won’t take the chance that they could be lying to him.

2:45 PM BBT – Nicole is telling Cliff about her conversation with Jackson last night.

2:50 PM BBT – Cliff said that he will make whatever promises he has to in order to try and get Jackson to keep him over Holly.

2:55 PM BBT – Nicole is camtalking and she is telling us that she is going to promise anything she has to in order to get Cliff into F3 and she will potentially break those promises. She apologizes to America if that makes her a bad person or a villain.

3:50 PM BBT – Jackson gets angry that the cameras are on him as he’s trying to pray. He asks for privacy.

4:12 PM BBT – Nicole camtalking again. She says she’s still trying to figure out what to do to save Cliff. She then talks about how it would could be easier to beat Jackson in the end over Holly. But then she says she hopes Jackson decides to keep Cliff so Holly won’t even be a Final 2 option.

4:40 PM BBT – Jackson reassures Holly that she has nothing to worry about. He says he would never turn on her. Holly says she knows and she just doesn’t want Cliff to guilt trip him. Jackson says Cliff and Nicole didn’t feel guilty when they were ready to cut Holly. Holly says guilt won’t work because all of their families want to be there.

5:08 PM BBT – Cliff tells Jackson that he knows he’s in a tight spot with this vote but he really wants to go to Final 3. He says Final 3 means his family gets to come out and participate. Cliff tells Jackson he knows he has had his back since the beginning. Cliff also says that during the double it was him pushing Nicole that kept Jackson and Holly safe (not true).

5:11 PM BBT – Jackson says he knows Nicole was the one pushing to keep Tommy and now she is the reason Cliff is in this position.

5:15 PM BBT – Jackson tells Cliff his word means everything and he’s loyal but only to those loyal in return. Jackson says Cliff has preached that he’s playing an individual game, but last week it was Cliff and Nicole as one. Jackson says he doesn’t feel like Cliff was being disloyal, exactly, but he was playing Nicole’s game last week and wasn’t willing to break away from her and make an individual decision. Jackson says he’s very conflicted. Cliff says he’s not asking for a decision right now, but would like him to think on it.

5:25 PM BBT – Cliff lets Jackson know that Nicole has “released him” from their Final 2 so Cliff has no deals and is willing do do anything to stay this week. Jackson tells him he is going to be thinking about this nonstop.

5:30 PM BBT – Cliff tells Jackson that he (Cliff) has fought harder than anyone else to get to the Final 3.

5:37 PM BBT – Cliff turns to begging. He tells Jackson that he is 54 years old and he’s never going to be on TV again or do anything else. He says he cashed in his 401K to cover finances after leaving his job and deciding to do Big Brother. Cliff says he will throw the comps and shake on any deal Jackson wants.

5:40 PM BBT – Cliff lets the camera know that he doesn’t think his talk with Jackson did any good.

6:05 PM BBT – Jackson telling Holly about Cliff’s guilt trip. Holly asks if she should go tell Cliff she has $20,000 in debt. Jackson tells her they’re not going tit for tat. He says he has his own issues but he’s not going to mention them or use them as leverage. Jackson tells Holly he is not going to go against her just because Cliff is guilting him.

6:23 PM BBT – Cliff catches Nicole up on his talk with Jackson. He says it is what it is now.

6:28 PM BBT – Nicole asks Cliff if she should take Holly or Jackson to final 2. Cliff says he would take Holly in a heartbeat. He says Holly would be easier to beat because she rode coattails.

6:40 PM BBT – Cliff tells Nicole that Jackson might not get his vote if he’s in jury. He says that might shock Jackson.

6:42 PM BBT – Cliff says if he and Nicole are in jury, Jackson might not have the 5 votes needed to win. He says that will be his last pitch to Jackson to let him know if they both go out, he probably won’t have the votes to beat Holly. He says if Jackson wants to give $500,000 to his girlfriend he probably can’t stop him.

7:30 PM BBT – HGs lounging and off doing their own things. No one is talking.

9:18 PM BBT – Jackson says Christie has been haunting his dreams.

9:20 PM BBT – Nicole tells Cliff she doesn’t like him joking about going to jury.

10:25 PM BBT – Cliff is testing what Jackson will and won’t notice when he’s distracted by a steak.

11:15 PM BBT – Nicole wishes they could get an hour reunion show.

11:20 PM BBT – Nicole retells how excited she was to have been doing press day and meeting Jeff. Cliff mentions his “giant mosquito” response to Jeff.

11:45 PM BBT – Cliff camtalks for awhile. He notes he was never a Have-not. Cliff plans to leave Orwell in the HN room so he’s undiscovered.

12:10 AM BBT – Cliff tests a new campaign approach on Nicole for what he’ll tell Jackson. He’ll use that Holly didn’t go back on her promises like Jackson will.

12:30 AM BBT – Cliff camtalks that he’s going to try and pressure Jackson with what viewers will think after he betrays his deal.

12:45 AM BBT – Jackson says he will give his full earnings to his parents and won’t touch the money to go to Vegas.

12:50 AM BBT – Nicole tells Jackson it hurts her to see Holly make it to F3 over Cliff.

1:00 AM BBT – After Jackson left Nicole continues to camtalk saying it’s nothing against Holly but she’s biased toward Cliff.

Cliff hasn’t given up and neither has Nicole on his behalf which is good but everyone knows this plan of Jackson’s isn’t going to change and won’t be sending Holly to Jury. Our F3 remains set with Cliff going at F4.