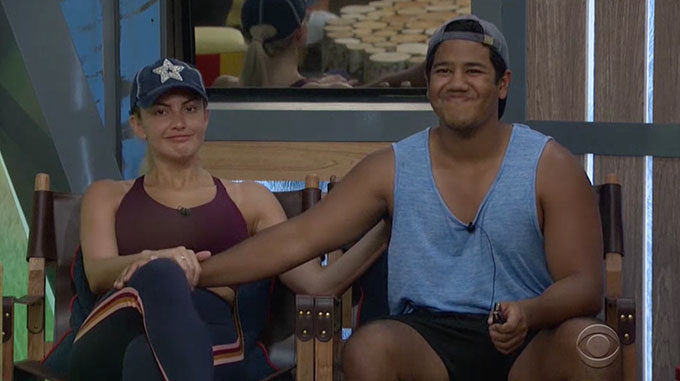 In just a few hours the next Big Brother 21 houseguest will be evicted. Or will they? That is up in the air now based on a commercial for tonight’s episode, but assuming there is in fact an eviction, who will be going home?

Will it be Kathryn who has sat on the block for about two weeks now, or will it be Ovi was became the replacement nominee after Sam used the veto on Cliff? Well, it’s not looking good for Ovi. He spent the entire day Tuesday campaigning. He worked as hard as he could on Christie, Tommy and Jack and he nearly got Christie and Tommy to budge. But then Jack reminded them that Ovi would be dangerous later in the game and they should just cut that off now while they have the chance.

A little later, though, it was Jack who was singing a different tune. Ovi decided to let Jack and Jackson know that he has the Nightmare Power and he told them if they keep him he would save the power to use on them if they need it. Both Jack and Jackson were very intrigued, Jackson especially, considering he really wants Kathryn out of the game so he can hook up with Holly (no joke). So Jackson and Jack tell Christie about the power, thinking they might be able to get her back on board with keeping Ovi… But it backfires.

Christie tells the guys that Ovi having that power is even more of a reason to send him out this week. She said they can get rid of him and the potentially dangerous power. And when they suggest it could actually be a power to benefit her if Ovi were to stay, she wasn’t having it. She said the fact that he talked to her several times about staying, but failed to let her in on his secret is just proof that he wouldn’t use the power to help her.

Ovi gave it everything he had, but it just wasn’t enough. The votes will most likely not be in Ovi’s favor tonight, but with the looming twist, who knows what will happen.

Who do you think will be evicted from the Big Brother 21 house tonight?