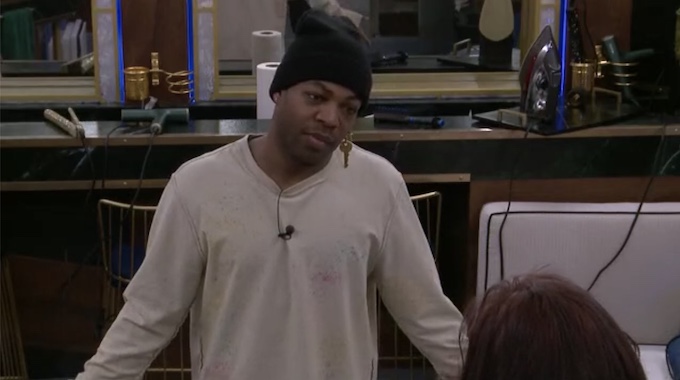 It is Eviction Day inside the Celebrity Big Brother 3 house and the houseguests are gearing up for another live vote and eviction! Some of the houseguests are starting to make plans in case they win the next Head of Household competition and are deciding which Celebrity Big Brother houseguest should be their target going into Round 6. Find out what happened before the feeds went down here with our feeds highlights report!

11:15 AM BBT – Carson and Cynthia are going over their campaign to Todrick and Miesha.

11:35 AM BBT – Cynthia tells Lamar and Todd that they had a shot to get Miesha out last round and they didn’t come together to get it done. They could have gotten Shanna out later. She also took a dig about how everyone was happily in their alliances.

11:45 AM BBT – Cynthia tells Todd that she is still trying to figure out how to save Carson. Todd says there is no way to save him at this point. He was hoping to win the Veto so that he could make a new plan, but that didn’t happen.

12:15 PM BBT – The houseguests are all suspicious about their possibly being a double eviction tonight since the Veto Meeting has already been done and Todd mentioned that they won’t give him his medication yet.

12:28 PM BBT – Todrick is talking to Cynthia and Carson and he is telling them that Miesha is worried because Carson is the only one that has smoked her in a competition. He tells them that he just wants them to know that for when they go to talk to her. He says that if Miesha is okay with keeping Carson, so is he, but he doesn’t want to be on the wrong side of the vote.

12:32 PM BBT – Todrick goes to quickly give Miesha a recap of what Carson and Cynthia want to talk about and they head to the room to talk to them.

12:35 PM BBT – Carson tells Miesha that she doesn’t have to vote for him to stay if she has deals. He says he just needs Todrick and Cynthia. He tells her that they would both keep them safe going into the F4. Carson says that it would be a better position for them (M&T) to stick with Carson and Cynthia than with Todd and Lamar. They don’t agree to anything. Give hugs and walk out.

12:55 PM BBT – Cynthia tells Lamar that one of them has to win the Head of Household this round or they are done.

1:02 PM BBT – Todd tells Cynthia and Carson that if they can flip Todrick and Carson says that it’s impossible. He says that he had a deal with Todrick to protect each other and he isn’t going to honor that because of Miesha.

1:10 PM BBT – Carson and Cynthia think that they made a good pitch to Todrick and Miesha. They agree that them not saying no right away might be a good sign.

Cynthia and Carson put in work to try and convince Miesha and Todrick to keep Carson over Lamar tonight on Celebrity Big Brother. Lamar has realized that it’s time to play to win in the upcoming Head of Household Competition. Will Cynthia or Lamar pull off a win tonight and take a shot at Miesha and Todrick? Or will Miesha continue to bulldoze the house? Check back later tonight to find out!