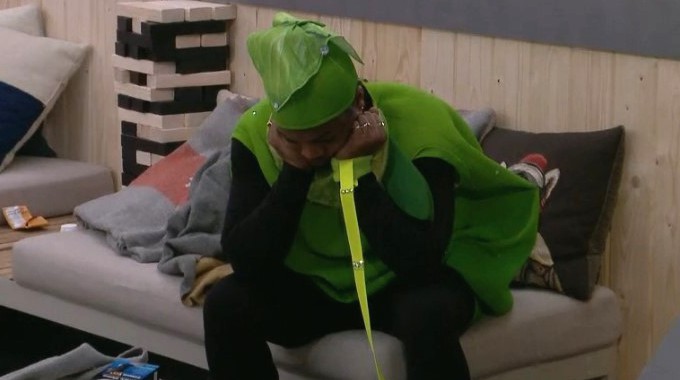 Along with the Noms planning we got a little tension in the house thanks to Lamar being Lamar and following his own desires regardless of what others might want. Like a deck of cards. Lamar is definitely an interesting HG!

9:15 AM BBT – HGs are waking up. Nominations Today is already on the television in the living room.

9:23 AM BBT – Todd wonders to Todrick and Lamar if they should put a pawn up because if they keep Cynthia off the block, she might vote in their favor. Todd wonders too if Cynthia isn’t on the block and Carson wins the Veto, he won’t use it because Carson won’t want Cynthia to go.

9:53 AM BBT – Todrick tells Todd that not putting Cynthia up is very gracious of him, but the people at home aren’t going to understand that Lamar has been campaigning to go home.

11:00 AM BBT – Todrick and Lamar are talking on one set of cameras and Miesha is still sleeping on the others.

11:15 AM BBT – Lamar tells Todrick that he didn’t think this would be so emotionally draining. Todrick asks how it was emotionally draining and Lamar says you get close to someone and then have to stab them in the back. Todrick asks if it was really hard for him to decide between Shanna and Miesha and he says yes and says that he would rather get the competition out.

11:20 AM BBT – Lamar says that he would rather compete against Shanna than Miesha in some of these comps.

11:50 AM BBT – Todd is talking to Miesha about his idea to keep Cynthia off the block and put Lamar up. Miesha says that he just needs to make sure that Carson doesn’t think that Cynthia will be safe if he saves himself.

11:53 AM BBT – Todd goes to tell Carson that he is going on the block next to Lamar. He tells him that he isn’t trying to play a cutthroat game and he wanted to be fair.

11:55 AM BBT – Carson tells Cynthia the plan and Cynthia is confused about why Todd wouldn’t put the two of them up together.

12:07 PM BBT – Todd confirms to Cynthia his plan to nom Carson and Lamar instead of sending her to the Block.

12:30 PM BBT – Todd talks with Miesha about his noms. He mentions he already let Carson know he was going up. Miesha seems to expect Cynthia goes up with Carson. Todd says one of them needs to win the Veto for this to work.

1:10 PM BBT – Todrick got the new playing cards in the storage room. Lamar picks them up and tears several cards. Todrick and Todd are upset with Lamar. They tell him that wasn’t funny. Lamar says that he thinks it was funny.

1:15 PM BBT – Miesha and Todd are frustrated that Lamar ripped up the new cards they received.

2:05 PM BBT – Cynthia and Carson just realized that if they’re not both on the Block together then Cynthia could win and save Carson to protect both of them.

2:50 PM BBT – Todrick tells Miesha that he expects viewers to tell Shanna she owes Todrick an apology. Todrick says he didn’t say or do the same sort of terrible things that Shanna did to him. He says he would apologize to Shanna but hasn’t done anything wrong to her.

Todd hasn’t yet made his nominations official, but he does seem set with his plans to put Carson and Lamar on the Block. We’ll see on Wednesday if that backfires, but for now the HGs will have to busy themselves with naps and torn playing cards.