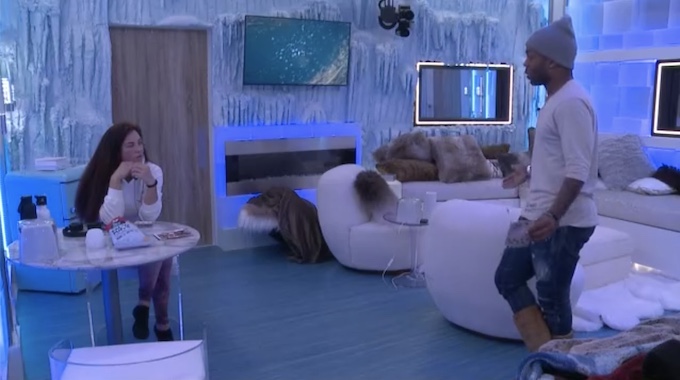 9:35 AM BBT – Carson wonders to Cynthia is they should drop hints that “they” talked about their plan? Cynthia thinks they should feel it out because it could show their cards.

11:03 AM BBT – Feed return and Miesha and Todrick are talking about the likelihood of Chris winning another Head of Household Comp. Todrick also doesn’t see a benefit in keeping Chris over Cynthia.

11:45 AM BBT – Todrick is talking to Chris about how he has always been transparent with him in this game and he has always had his back. Todrick mentions that the only time he wasn’t completely transparent was when Chris was asking him questions he felt weren’t his place to answer.

11:52 AM BBT – Todrick says that he should have talked to him about this because when he looks back at this, he will see that he was never coming for him. He also says that the two of them fighting has also impacted Miesha’s game.

12:35 PM BBT – Feed came back after an extended downtime, Todrick is walking out of the suana room and tells Chris that he has to “fix this.” Tells Miesha when he gets out in the kitchen that he wishes she was listening.

12:40 PM BBT – Todrick and Miesha head to the gym and Todrick retells his conversation with Chris.

12:58 PM BBT – Todrick tells Miesha that he made a commitment to Shanna, but if he wins HOH and gets the opportunity to backdoor her (if Carson comes down), then he will to show is loyalty to Miesha. She says she appreciates that.

1:00 PM BBT – Miesha tells Todrick that at finale, Shanna would never get her vote. She adds that she is happy that Todrick and Chris had a chance to talk and that she likes chapters to be closed.

I’m going to go out on a limb here and say that if Chris’s fate wasn’t sealed before, it sure is now. Cynthia will likely get through tonight’s vote unscathed, but tonight’s Head of Household competition is going to be imperative for her or one of her allies to win. Be sure to come back later tonight to find out who gets voted out and be on the lookout for our HOH spoilers too!