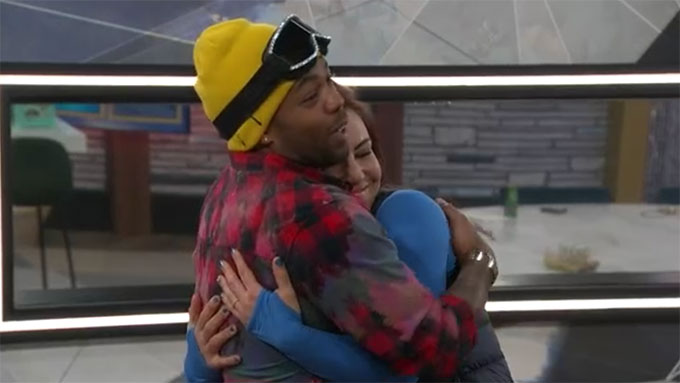 The day started with five Celebrity Big Brother houseguests and ended with three. After the live double eviction, the brand new Final 3 settled in for a bit to let the events sink in and prepare for the final Head of Household competition that will decide which two get plead their cases to the jury.

8:45 AM BBT – Miesha and Todrick are studying days and events.

9:00 AM BBT – Todd tells Cynthia that he would really like to split Miesha and Todrick up before he leaves the house.

9:05 AM BBT – Todrick tells Cynthia and Todd that he thinks there is a good chance that there is a Double Eviction tonight.

9:15 AM BBT – Todrick is helping Cynthia with her days and events.

9:33 AM BBT – Feeds cut to bubbles and then animal loops shortly after.

1:30 PM BBT – Miesha is explaining to Lamar how the remainder of the season is going to go (possible DE tonight, final HOHs, winner picks who to take, and then jury votes).

1:40 PM BBT – BB tells the houseguests “remember houseguests, the only constant in life is change.”

1:44 PM BBT – Todrick is quietly speculating with Miesha that the last thing BB said to them means that there is going to be a double eviction tonight.

2:05 PM BBT – Cynthia grabbed her suitcase out of the storage room and started packing (BB put everyone’s suitcase in there).

8:15 PM BBT – Todrick says that Lamar wouldn’t even look at him the past two days but they were able to patch things up today and he’s happy about that.

8:17 PM BBT – Todrick says people have to respect their gameplay even if they are angry at them. He says they played the game how it is meant to be played.

8:22 PM BBT – Todrick keeps going on about being a BB superfan.

8:30 PM BBT – Todrick says he doesn’t like that viewers will fill in for Kattan’s vote because he doesn’t know what they’ve shown.

8:40 PM BBT – Miesha says she is shocked she is in the Final 3. She said after she won that first HOH she thought for sure she had sealed her fate and would be sent out right after. Cynthia says Miesha just played the game well because people were coming after her.

9:00 PM BBT – Cynthia asks if Lamar was actually playing the game. Todrick and Miesha both agree that he was not.

9:34 PM BBT – Todrick says people online could think he’s the most annoying person to ever play Big Brother. He says they have no idea how the show has been edited or how they’re being perceived.

10:10 PM BBT – Miesha is running up and down the stairs for a workout.

11:35 PM BBT – Cynthia worries to Todrick about how viewers are responding to the season and she wants to see the episodes when she gets home.

11:45 PM BBT – Todrick tells Miesha he thought he would have put her (M) on the Block, but didn’t. They both say they’d be happy for the other to win.

12:25 AM BBT – Miesha complains to Todrick that Todd wanted to just chat with her but she didn’t like that and needs focus in her conversations.

1:20 AM BBT – Todrick says he turned down CBB2 because of concerns over cast diversity.

It’s hard to be surprised with how the F3 settled out last night. Miesha and Todrick will continue to steamroll their way through the last competition and then we’ll have our F2 to stand before the Jury. Congratulations to Miesha as it sounds like the evicted Jurors wouldn’t touch Todrick with a ten-foot pole.