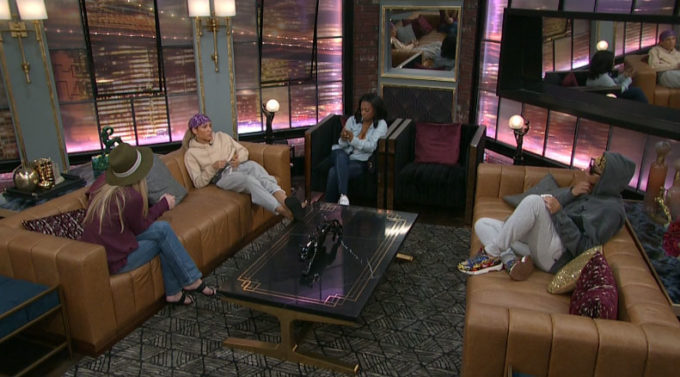 We are only two days away from the Celebrity Big Brother 2019 season finale so this will be our final player rankings. With five houseguests left, and three going home at the hands of the current and next head of household, the player rankings won’t mean a lot, but it’s still fun to see how they have been stacking up. So let’s get to it.

1. Kandi Burruss. I never thought I’d see the day that Kandi came in at No. 1, but here we are. And it’s pretty well-deserved. She hasn’t been a comp beast (but who has really this season?), but she’s played very smart and laid so low that she’s one of only two players without any blood on their hands. Kandi is the biggest reason Natalie is out of the game, and Natalie was definitely the biggest threat to win. Kandi kept Tom in check during his last HOH, and basically set up the game as she wanted it. Of course the other HGs know that Kandi would be hard to beat at the end, so she’s the next target and will likely go home if she doesn’t win this final veto competition. But that doesn’t change the fact that she played the best game in the past couple of rounds.

2. Tamar Braxton. Tamar comes in at No. 2 for just how much power she’s had recently. She won an HOH, she won the safety competition and then she won the double eviction veto that secured Tom’s eviction. And Tamar really knows what’s going on in the game as she has all season. She was a bit messy earlier in the season, which I was sure would come back to bite her, but so far that hasn’t mattered. She’s strong here at the end of the game and that’s pretty impressive.

3. Ricky Williams. Ricky has played a solid game all season. He’s had a weird journey, though, that mostly included laying in his bed all day. But he really was the brains, or at least the voice of reason, behind the trio he had with Lolo and Natalie. And now he’s in such a good position, I can’t see him not in the final 2. I’ll be surprised if he’s not there.

4. Lolo Jones. She was often emotional and sloppy, but she’s made it this far. She now has two wins under her belt and both of those came at crucial times in the game. So she basically secured her safety. I have very little respect for how she played the game, but it has clearly worked out for her.

5. Dina Lohan. Dina hasn’t played the game. She knew Natalie needed to go, but I’m sure most of that was from Kandi’s convincing. Dina shouldn’t still be in the game and if she makes it any farther, it’ll be a travesty. Sorry, but I’m just telling it like it is.

How would you rank the remaining five Celebrity Big Brother houseguests?