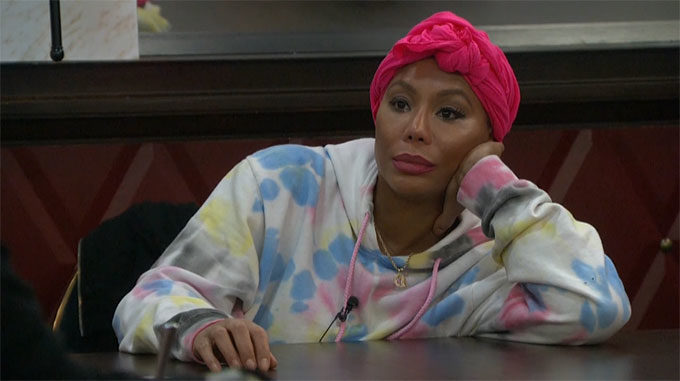 It was the last full day of Celebrity Big Brother 2019 Live Feeds and they didn’t let us down. Some last-minute flip-flopping on who they want evicted and who wants to go to the Final 2 with whom, kept the HGs busy later in the evening.

12:25 PM BBT – Dina is pitching to Lolo that Kandi will take Tamar to F2, not Lolo. Lolo says she would have saved Dina today if she had told her that earlier. Lolo wants Dina to tell Ricky that too.

12:45 PM BBT – Dina warns Lolo that Ricky doesn’t have her (L) back. Tamar has been listening in at the Lounge door.

1:05 PM BBT – Dina is telling Ricky that Kandi and Tamar will take each other. Ricky disagrees and says he’s been listening to everyone in the game.

1:15 PM BBT – Ricky asks Dina about her strategy for getting to the end. Dina doesn’t have one but says she’ll just try to win F4’s HOH to get there.

2:25 PM BBT – Kandi tells Ricky his best chance is up against her at the end since he wouldn’t be splitting the Bedroom Alliance votes with her. Ricky says he’s not worried about numbers and will let his game speak for itself. Ricky says he understands that Tamar and Lolo are in it for themselves. He offers a deal that if there is a tie and he keeps her (K) that she take him to F2. She accepts.

2:30 PM BBT – Kandi counts out the votes for Dina if Lolo takes her. She tells Ricky that Dina would have more than enough votes to win if someone takes her to the end.

3:25 PM BBT – Ricky and Tamar promise each they’re remaining confident in their trust of one another for their F2 deal.

3:30 PM BBT – Tamar tells Ricky she doesn’t care who stays between Dina and Kandi but she can’t stand Dina.

6:25 PM BBT – Lolo tells Tamar that Dina alleges Ricky said there is no alliance. Lolo says it feels like Ricky is closer to Tamar than her. Tamar insists she doesn’t have a deal with Ricky.

6:35 PM BBT – Lolo repeats Kandi’s suggestion that Dina would beat any of them. Tamar agrees and says that should tell Lolo what she needs to know (to get rid of Dina).

8:36 PM BBT – Ricky asked Lolo if she’s still on with keeping Kandi and she said she thinks so. He says he’s not. He tells her they should keep Dina. Lolo quickly agrees.

8:48 PM BBT – Ricky tells Tamar he remembers when she said it was a bad idea to leave Kandi in the game and now he thinks she was right about that. He also disagrees that Dina can win against everyone. He thinks they can beat Dina.

9:06 PM BBT – Tamar goes to talk to Lolo after Ricky mentioned sending Kandi home. Tamar tells Lolo she just doesn’t want to evict Kandi. Lolo says they might have a better shot at getting to the end with Dina since Kandi has basically said she’d take Ricky to the F2. She also thinks Kandi knows the days better than Dina and has a better chance at winning HOH.

10:10 PM BBT – Ricky tells Tamar that if she wants to vote for Kandi to stay to keep their relationship solid he’s fine with that and he will break the tie to send her home.

10:15 PM BBT – HGs received some treats from PopTV. They have fruit, cheese, and sparkling cider (no booze the night before the big event!).

10:40 PM BBT – Dina sits alone in the backyard as the house winds down.

11:30 PM BBT – HGs are settling into bed. Tamar and Lolo discuss what the live finale will be like.

12:30 AM BBT – Kandi is still awake and staring at the playing cards perhaps studying.

Houseguests are ready for the finale and so are we! Ricky seems ready to break the tie and send Kandi out the door if Tamar isn’t willing to make that choice with Lolo. The Bedroom Alliance seems uncertain on how to proceed as a whole but they’ll definitely get to the F4 as a group! In a few more hours we’ll see who joins them in the F4 when the finale kicks off at 9/8c on CBS.