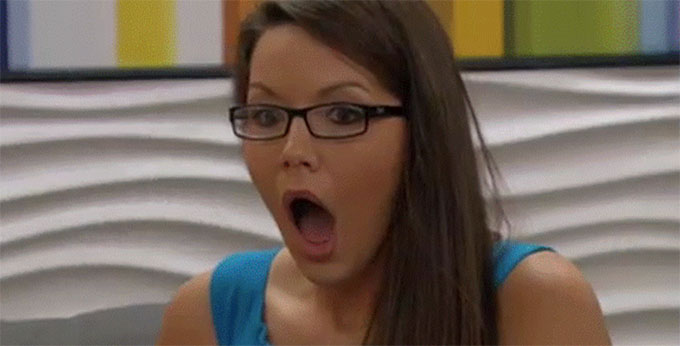 For a refresher or a primer to anyone new, Big Brother 14 premiered in July of 2012 and featured 10 new houseguests and four past players returning as coaches, Dan Gheesling, Mike “Boogie” Malin, Janelle Pierzina and Britney Haynes. And to no surprise to anyone, those coaches eventually entered the game to play for the grand prize themselves. So let’s get to the top moments of that season.

10. Night One Eviction. I hate first night evictions. They’re just grossly unfair and unnecessary. But this one has had such an impact that it has to be mentioned. This season it was poor Jodi who got the night one chop when Dan’s team lost the competition and he was forced to cut one of his team members. Jodi has become a sort of BB legend in her own rite, her image sometimes appearing in competitions and her name always coming up on social media.

9. “Eat Your F-in Froot Loops.”  Willie Hantz was a hothead from Day 1 and his BB story is one of aggression and unlikability. One of the first moments people in the house started to tire of him was Week 1 when he nominated Frank and Kara for eviction. He had promised Frank safety, but Britney and Janelle convinced him to go after Frank to weaken Boogie or Kara to weaken Dan. So tensions got high and Frank and Willie had it out in the back yard. And Boogie even joins in. This of course results in one of the most memorable phrases from the season. Frank tells Willie to “Eat your f-in Froot Loops.”

8. Shane and Danielle’s Nomance. Even Zingbot got in on this one when he told Danielle that Shane was going to get a restraining order on her. BB producers often try to make a showmance happen, and this season was no different. No one wanted that showmance more than Danielle, though. But Shane wasn’t having it. It’s hard to watch at times, but it was such a major theme of BB14, you just have to embrace the hilarity and cringe-factor.

7. “Get To Stepin, Boogie.” Boogie’s pre-jury eviction was such an unexpected moment. But how it played out is incredible. When Ian told Boogie, his former coach, to “get to steppin,” it was clear the roles had reversed. (That was a callback to when Boogie told Howie the same thing in BB7). And then the topping on the cake was when Ian lets him know he masterminded Boogie’s eviction. Ian says he learned from the best, which was the best compliment he could have given Boogie.

6. Joe’s Blunder. Dan goes into a dark bedroom to ask Joe who he would put on the block. Joe says Danielle and Shane but let’s us know in the DR that he’d really put up Dan. Dan leaves and comes back 30 minutes later and gets into the bed next to Joe. And Joe, thinking it’s someone else, starts telling Dan about what Dan just asked him. Dan says “This is Dan.” And Joe goes “whassup.” Priceless moment. 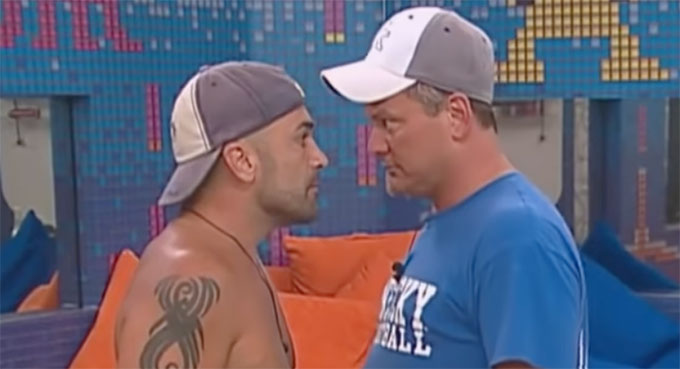 5. Willie Gets Expelled. As mentioned earlier, Willie’s short time on Big Brother was filled with angst and no one felt comfortable around him. And when he was shaping up to be Frank’s target for eviction, Willie spiraled. And then one night he threw some pork rinds at Janelle and head butted Frank. So needless to say, Willie was expelled from the game.

3. Britney’s DRs. Like her previous season, Britney reigned supreme as the DR Queen. From her dry tone to her hilarious insults, no one can do it like her. And let’s go back to Boogie’s eviction for a moment for an example. In her goodbye message to him, she re-enacted a Chilltown DR phone call, only this call was from Janelle, who Boogie helped get evicted two weeks before.

2. That Jaw-Dropping Blindside. One of the most epic blindsides in the show’s history was at Final 4 when Dan convinced Danielle to use the veto on him. He told her that if she took him off the block and put Shane up in his place, as the sole vote to evict, he would send Ian out the door. And she bought it. And when Dan cast his vote he sent her fauxmance and Final 2 deal out instead. And her jaw HIT THE FLOOR. Beautiful moment.

1. Dan’s Funeral. Imagine if this wasn’t No. 1. When I started this list, there was never a doubt in my mind that Dan’s funeral would be the top spot. So Dan was on the block with Danielle and after losing the veto that week, his fate seemed sealed. But he picked up a solitary confinement punishment during the veto competition and while locked away, he concocted a plan. He called all the houseguests together and staged his own BB funeral. He pretended to accept his fate as he went through each houseguest, saying something to each that tugged at all of their heartstrings. And then he pretended to disown Danielle, which made her cry (that was a bonus). In the end, Dan’s plan worked and Jenn used the veto on him and Britney was put up in his place and evicted.