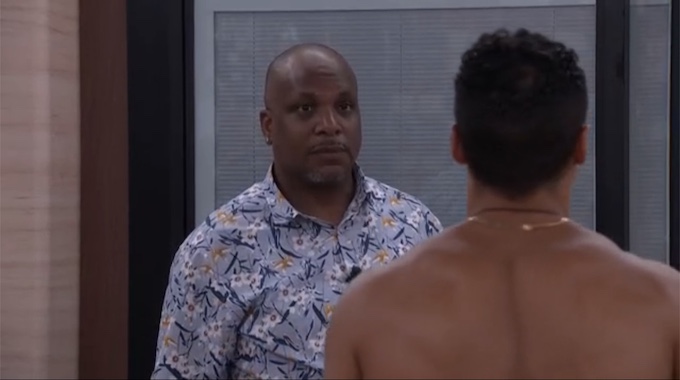 It is Veto Ceremony Day inside the Big Brother 24 house! Yesterday, a couple of Big Brother houseguests tried to make a push to change the plans for today’s ceremony. Were they successful or did they expose their position inside the BB24 house? Read on to find out!

As we know, Michael is the Head of Household this week and he nominated Monte, Joseph, and Terrance as pawns in order to backdoor Daniel. Michael was okay with the idea of Daniel and Kyle playing in the Power of Veto Competition and winning it. The backup plan would have been to keep the noms the same and vote Terrance out. However, when Daniel and Kyle weren’t picked and that scenario was no longer a possibility,

The plan was clear with Michael, Brittany, Joseph, Monte, Terrance, Jasmine, and Turner all playing in the Veto. No matter who won, they would use the Veto. Michael went on to win the Power of Veto Competition (his fifth comp win of the season) and decided that regardless of how much Daniel being in the house helped his game, he had to do what was best for him and The Leftovers.

However, not knowing that Michael is working with a large group of houseguests, Terrance and Daniel thought that they still had a chance to change the outcome of this week. Their plan was to try and get some of the houseguests to back their idea before taking it to Michael. When Daniel thought that he had enough support, he went to Michael and pitched the idea of taking out a bigger target this week. Monte.

While, Michael seemed to be intrigued with this idea earlier in the week, with him being the Veto holder, that plan doesn’t really work for him. Michael and Brittany talked last night about this week’s Veto Ceremony and both agreed that sticking with the alliance and backdooring Daniel was the best route to go. I’m sure the rest of the house would also agree.

Be on the lookout for Veto Ceremony spoilers coming up later today! In the meantime, do you think that this is the best move for Michael’s game or for everyone else’s?