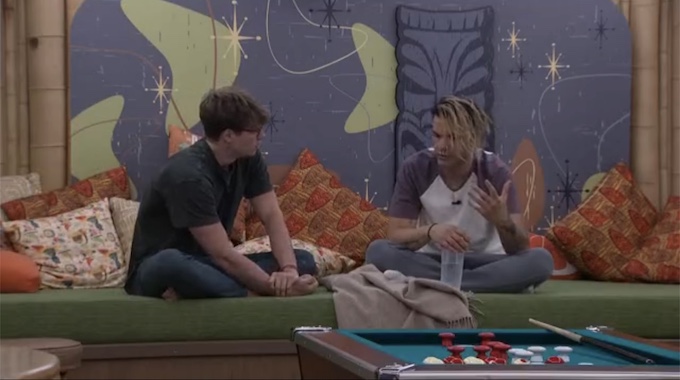 The Nomination Ceremony for Week 5 is officially underway inside the Big Brother 24 house! Prior to the meeting, this week’s Head of Household held their one on ones with their fellow BB24 houseguests and seemed to have ironed out a plan. While the house target seems to be pretty clear, this week’s HOH doesn’t seem overly concerned about making sure they go. Read on to find out what their backup plan is on Big Brother right here!

9:40 AM BBT – Terrance tells Daniel that he has a funny feeling he is going to be up again. Daniel says that if he is up this week, it’s only because of the people he is sitting next to. It all depends on whether Michael wants to make a move like that.

10:05 AM BBT – Michael alone in the HOH camtalking. He says that he feels good with the alliance, but he also recognizes that there are big threats inside the alliance. He says he doesn’t want to look back and wish he took a shot early.

10:07 AM BBT – Michael talks about how Monte is one of the biggest physical threat and has volunteered to be a pawn. Says that if something happens and he goes home, he wouldn’t be mad about it.

10:53 AM BBT – Michael is meeting with Terrance and asks him who he thinks the house would like to see targeted this week. Terrance says that everyone has been talking about Daniel because of the way that he was acting yesterday.

10:55 AM BBT – Terrance talks about joining Monte and Joseph, but still feeling like he is being left out of the loop.

11:00 AM BBT – Michael asks Terrance how he would feel about being a pawn (says he is asking everyone) and Terrance says that his group would be very motivated to win the Veto if that was the case. He says that in a sense he would be comfortable, but he would like to have more conversations.

11:05 AM BBT – Michael asks Terrance if he has heard anyone mention him as a potential target and Terrance said the only one he heard was Nicole and she’s gone.

11:12 AM BBT – Daniel is pitching to Michael that if he keeps him this week, Michael can use him to take shots at people that Michael might not be able to. He also mentioned that if he makes Jury, he will vote for Michael to win.

11:15 AM BBT – Jasmine tells Monte that she is nervous to go up because Turner put Michael on the block.

11:20 AM BBT – Terrance is retelling his meeting with Michael to Jasmine.

11:25 AM BBT – Michael is meeting with Alyssa and she mentions Daniel as the house target, but mentions that she feels bad because they did vote out his person.

11:30 AM BBT – Michael asks Alyssa what her feeling about being a pawn. Alyssa tells him that she would prefer not to be on the block since they were on the block last week and Taylor is now part of their group and she’s been up every week. Michael tells tell her that he feels that putting the guys up might be best.

11:40 AM BBT – Michael is talking to Indy now. He asks her who she thinks the house target is, she says Daniel. However, she is worried about how would go next. Michael asks her who else she would put up and she tells him that if she were him, whoever put him up. He says the only thing about putting Turner up is that he would be risking Jasmine’s game.

11:42 AM BBT – Michael shares with Indy his plan to use the guys as pawns and Indy says that she doesn’t think that they would be upset about that. They would just need to make sure that the veto is used and Michael says that there would be a greater chance for them to get the Veto if he puts them up.

11:51 AM BBT – Daniel is talking to Terrance about his talk. He says that he hopes that he gets picked for Veto.

11:56 AM BBT – Kyle is apologizing to Indy for possibly waking her last night when him and Alyssa came into the room while she was sleeping.

12:00 PM BBT – Kyle and Michael are talking now about the possibility of keeping Daniel in the house, but Michael says the only way he can guarantee them to play in the Veto is by putting them up. However, if they don’t win, no one else is going to use the Veto. Michael says that he is probably going to put the guys up and then see where things go.

12:03 PM BBT – Michael says best case, Daniel and Kyle get picked and win and they keep noms the same and vote out Terrance.

12:08 PM BBT – Kyle wonders to Michael is he is overthinking the Monte, Joseph, and Taylor thing. Michael says that them coming to the group and telling them about other alliances that have been brought to them is a good sign.

12:22 PM BBT – Jasmine checks in to make sure that the plan hasn’t changed. He reassures Jasmine that she has nothing to worry about this week.

12:25 PM BBT – Michael is meeting with Joseph now and tells him that it’s safe to say that Daniel is the target this week and he would likely go the backdoor route. Joseph asks with that plan, would they (Joseph, Monte, and Terrance) go up initially and Michael says that give them the best shot if Daniel and Kyle get picked to play.

12:40 PM BBT – Michael asks Joseph what he thinks he should say in his speech and he tells him that he should not mention that they (Joseph, Monte, and Terrance) are pawns.

12:52 PM BBT – Taylor confirms with Michael that their F3 is still intact. He says absolutely. He thinks that it’s a good think for them to have a smaller alliance within their bigger one.

12:55 PM BBT – Michael tells Taylor that worse case if the guys go up and Kyle and Daniel win the Veto and use it, he would target Jasmine over Taylor and her group. She says that she appreciates that, but she would rather then take out their next target (Alyssa) if they can’t get the current target.

1:00 PM BBT – Michael is running everything by Turner. They then talk about muffingate a bit. Michael jokes that this has been productive gametalk.

1:05 PM BBT – Michael is meeting with Brittany and telling her what he’s been asking everyone and how the talks are going. Everything is to be expected.

1:07 PM BBT – Brittany mentions that she knows there is no reality where they make it to the end with this alliance (after Michael brings up making waves if he doesn’t put Daniel up). However, she isn’t sure if striking now is the right move either. Michael says best case is that Kyle and Daniel get picked and win and don’t use it.

1:14 PM BBT – Kyle tells Daniel that if they are picked to play the Veto, they have to win. Daniel says that if they don’t win the Veto, they will go up and Daniel will 100% be going home, but he wants Kyle to know that he isn’t going to say anything bad about him in his campaign.

1:25 PM BBT – Brittany wonders what their biggest worry for next week should be. Daniel staying and going after them? Is if Joseph or Monte winning HOH and taking the first shot?

1:36 PM BBT – Brittany tells Michael that she is actually a hypnotherapist, not a researcher.

1:45 PM BBT – Michael is meeting with Monte and he is running through all his conversations.

1:53 PM BBT – Michael and Monte are talking about Terrance and Daniel’s relationship and they both wonder if there is more to it than they are letting on.

2:00 PM BBT – Taylor, Alyssa, and Indy are in the back bedroom talking about how much they would love to play in the Veto and win it.

2:09 PM BBT – Daniel tells Terrance that he thinks that he is the backdoor option and that Terrance, Monte, and Joseph will likely be the pawns. Terrance wonders if the best thing is if someone can win the Veto and keep the noms the same.

2:35 PM BBT – Alyssa, Indy and Jasmine are talking about the nominations and backdoor option for this week.

Michael doesn’t think that Daniel going this week is super important to his game and has been toying with the idea of putting two of his Leftover alliance members up and leaving them there if the Veto doesn’t go a certain way. Michael is actually hoping to see Daniel and Kyle get picked tomorrow and would like to see them win even so they could keep the noms the same. I think the question is, who would Michael’s target be at that point? Terrance? Or someone who is a bigger threat like Monte or Joseph? Only time will tell!