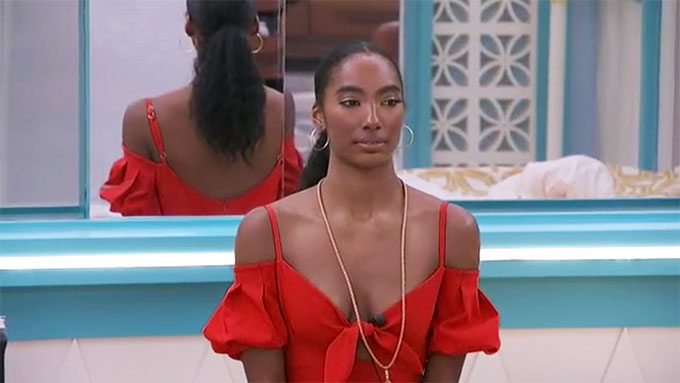 Big Brother 24 has officially hit the 11th-week mark. We are down to the Final 4, know the first person in the Final 3, and even know who the initial nominees are this week. But as we all know, the Power of Veto is the most important part of the week now.

7:07 PM BBT – Monte wonders how Alyssa did with Julie. Turner says he best she cried. They wonder if they asked about Kyle. “At least we all got hugs from her,” Monte says.

7:13 PM BBT  – Turner says to Monte that Brittany flipped that vote. Turner says you have to know that wasn’t me. Monte says he knows it was Brittany because it was all over her face. Monte says Brittany probably wants to pin it on Turner. Turner says he’s glad they had the conversation with Taylor before about suspecting Brittany was tying to flip the vote.

7:15 PM BBT – Monte says he knew what Brittany was up to. Turner said he didn’t think she was going to do it, though. Monte says this is why he’s so happy he kept Taylor this week, because Brittany would’ve probably won HOH.

7:16 PM BBT – Monte says Brittany shows her cards so easily. He says he knew as soon as he saw her walk out of the diary room from voting that he was going to have to break the tie. Monte says that was so slimy of her. Monte says he knows for sure that Turner didn’t vote Taylor. Monte says it was definitely Brittany, “100 percent.”

7:17 PM BBT – Turner says he knows Brittany is going to go to Taylor and tell her it was Turner. Monte says as long as Brittany doesn’t win the veto, they are fine. Turner says he’s sure it will be himself and Brittany on the block, and he’s fine with that, but he just doesn’t want it to be Turner and Monte on the block. Even though that doesn’t really matter either. They just have to win the veto.

7:18 PM BBT – Monte says he really wanted Taylor to win so that Taylor wouldn’t have to suck up to Brittany or act like she believes that she didn’t vote to evict her. Monte says he knows Brittany is going to BS Taylor this week.

7:19 PM BBT – Monte says he really wants Taylor to look at Brittany’s actions, despite how close they’ve been all season. He said Brittany has been acting really off for weeks now, and clearly hasn’t been on Taylor’s side for awhile now. They agree that they need Taylor to see that.

7:26 PM BBT – Taylor asks Brittany for a hug. Brittany congratulates her. Taylor does some celebrating, singing “Started From The Bottom.”

7:28 PM BBT – Taylor tells Brittany either Brittany wins veto, or Taylor wins veto, and they’re both in the Final 3. Taylor says she has her back.

7:29 PM BBT – Brittany tells Taylor, thankfully Monte pulled through. She says that Alyssa told her Turner was voting to keep her. Then goes into saying that she told Alyssa she was voting her out and that Turner voting to keep Alyssa was good jury management (so she’s definitely not owning up to the vote).

7:34 PM BBT – Taylor says to Brittany that the nominations are simple (she’s referring to Monte and Turner). She says now it’s just go win so it doesn’t matter really.

8:17 PM BBT – Monte and Turner discover that the TV says Nominations Today. They’re all surprised. Turner asks if they should do one-on-ones really fast.

8:22 PM BBT – Taylor alone in her bedroom says “Turner and Monte …” Then she pauses for a long time. “I’m final 3. I just need to make sure Turner goes this week.”

8:28 PM BBT – Taylor talking to the camera says there are two people saying they didn’t vote to evict her, so those are the two people who go on the block. She says then it comes down to who wins veto, and she’s fine with that.

8:42 PM BBT – Taylor is making soup for the house and Turner and Monte are playing Chinese Checkers.

9:35 PM BBT – Taylor talks with Brittany for the noms. Brittany understands that it’s all about the Veto and doesn’t really matter who goes up. Taylor asks who she would vote out if she has the Veto. Brittany says she wants Turner out.

9:55 PM BBT – Turner questioning Brittany over the vote. He calls her slimey and doesn’t like what she did. Brittany lets him ramble, thanks him for his comments, and walks out.

10:20 PM BBT – Monte and Taylor wrap up their talk with a kiss so she can talk next with Turner.

10:25 PM BBT – Turner is feeling emotional about the Alyssa eviction and tearing up as he talks with Taylor upstairs. He promises he voted out Alyssa and asks that Brittany not be kept off the Block.

10:30 PM BBT – Turner telling Taylor he doesn’t care if he gets third as long as Brittany gets fourth.

11:45 PM BBT – Taylor and Brittany discussing Turner. Brittany says Turner was upset at her downstairs in the bathroom and he was frustrated that Taylor won HOH. Brittany continues to insist she did not vote against Taylor.

12:10 AM BBT – Taylor realizes she won’t see the Jury house now that she’s guaranteed a spot in F3.

12:15 AM BBT – HGs got the backyard again so they’re trying to figure out when the Veto might happen. (Could be at the offsite location they use sometimes for comps.)

1:05 AM BBT – Monte and Turner talking. Monte thinks Taylor wants to take Brittany to F2 so he wants to take Turner and vote out Brittany.

1:20 AM BBT – Brittany briefly joined Taylor with Monte and Turner outside as they’re playing pool.

1:30 AM BBT – Turner says in just a few days either him, Monte, or Taylor will be rich.

2:00 AM BBT – Monte and Turner are awake in the kitchen making snacks and chatting about the Jury house.

3:00 AM BBT – Taylor is awake in the HOH room while the other HGs sleep downstairs.

4:00 AM BBT – Monte snuck up to the HOH room. Taylor was still awake and waiting for him.

It’s all about the Veto and everyone gets that. Taylor has her spot at F3 and she wants Brittany to stick around while the guys are backed up against the wall. Veto comp is coming up on Friday, a day early, so don’t miss the action because this will be a big one!