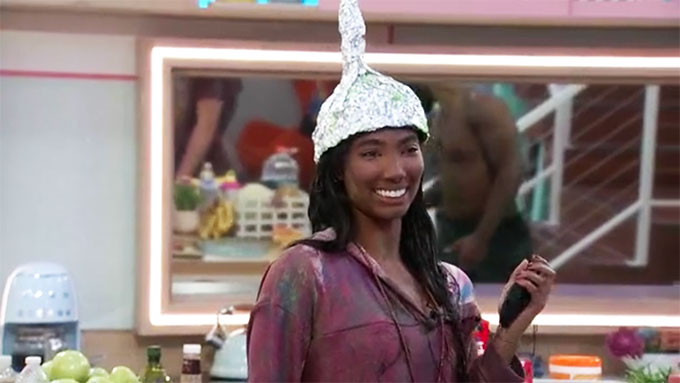 It is officially a new week in the Big Brother 24 house. The remaining houseguests have made it to jury, the Festie Bestie twist is over, and there’s a brand new Head of Household.

If you tuned into the Live Feeds last night after the show, then you know that Taylor outlasted the other players during the wall endurance competition to become the new HOH. It was an emotional win for her, and she already to started talking about her plans for the week. Read on to find out what she has in mind.

8:02 PM BBT – Feeds are back following the end of the HOH competition.

8:04 PM BBT – Michael tells Taylor that he’s so proud of her. She says and after her sworn enemy goes out the door. Michael says “boring season my ass!” And adds that Daniel is going to be so mad when he finds out she won HOH.

8:05 PM BBT – Taylor says Kyle was really trying to win it. Michael says he thought Kyle and Joseph would have dropped sooner because of their fake alliance (The Swatters).

8:08 PM BBT – Michael says he can’t believe they all made jury. Kyle jokes a bunch of clowns in jury.

8:33 PM BBT – Turner asks Terrance how he’s feeling about Taylor winging HOH. Terrance says that’s what he has been thinking about. He says he isn’t sure if she feels like everyone was against her but he says he always fought for her (he hasn’t). Turner says he feels good about Taylor as HOH.

8:34 PM BBT – Terrance says he hopes fighting for Taylor carries some distance with her. He says he hopes she didn’t take it personally that he was close to Daniel this past week.

8:44 PM BBT – Kyle talking to the cams says he’s here to stay. He says when Daniel made his eviction speech he wanted to say “and here we have another childish outburst from a 35-year-old cosplayer. Thanks for making it easy for me.” But he says he couldn’t bring himself to say it. Kyle says he is proud to take second in the wall competition. He says he couldn’t hold on another minute and Taylor earned that fair and square. He says he was never going to throw it.

8:47 PM BBT – Indy says that if Taylor doesn’t nominate Monte then that’s proof she’s working with him. Kyle wonders who she will put up. Indy implies it could be Kyle and Terrance. She says she doesn’t think Taylor will be putting Joseph up anytime soon. Indy says Taylor also said she won’t put up any girls.

8:48 PM BBT – Kyle says it will have to be himself and Joseph then. Indy says no, she’s going to put up the girls, she thinks. Kyle says but she said she wasn’t touching the girls. Indy says well you never know with Taylor. Kyle says he bets it’s him and Terrance or him and Tuner.

9:03 PM BBT – Brittany tells Michael that Jasmine is sitting there looking all salty and Indy is giving her this I hate you look. Michael says they all know about them and the only thing they don’t know of or aren’t sure of is Joseph and Kyle’s involvement.

9:06 PM BBT – Monte talks about whether or not they are still keeping their thing under wraps, but says once Taylor makes her nominations, it might become pretty obvious what’s going on.

9:08 PM BBT – Turner wonders who Taylor is going to nominate. Monte says Taylor said she won’t nominate Jasmine, so it will have to be Terrance and Indy or Terrance and Alyssa.

9:09 PM BBT – Turner says he knows that Taylor is upset with Terrance and that she feels betrayed by him. Turner tells Monte and Kyle that Terrance said he feels pretty good with Taylor, though.

9:12 PM BBT – Joseph tells the guys he threw the HOH as the Pound meets again.

9:20 PM BBT – Kyle worries to the group that Taylor said she wouldn’t nominate a girl so he thinks he’ll be going up.

10:10 PM BBT – Michael doesn’t think he would have done well in that competition. They discuss how strong Taylor was doing and how she could have lasted longer.

10:20 PM BBT – Kyle talks with Alyssa about trying to get the target off him and onto Indy. He points out those are mean girls.

11:30 PM BBT – Michael and Brittany discuss targets. He wants Jasmine gone but she says it’s not likely to happen. He doesn’t think Terrance is a threat.

12:35 AM BBT – Taylor gets her HOH room and the HGs join her to see what she’s received.

1:10 AM BBT – Terrance trying to work on Taylor. He says there is a showmance which is an easy option.

1:15 AM BBT – Indy talks with Taylor about targets. Taylor says her target is Monte. Indy says to use two pawns. Taylor claims she made a deal with Kyle before he dropped.

1:25 AM BBT – Taylor meets next with Alyssa. Taylor says she hopes to put up two of the guys. Alyssa wonders if Monte is the target but Taylor says she’s good with him.

1:35 AM BBT – Jasmine’s turn with Taylor. Taylor asks Jasmine who she thinks are the house targets. Jasmine thinks the same option from last week now that Daniel is gone, the other nom (Kyle).

1:45 AM BBT – Taylor discusses Terrance and Turner noms with Jasmine. Jasmine thinks Turner would be okay being the pawn.

2:00 AM BBT – Taylor meeting with Brittany and Turner. Turner says he didn’t drop, he fell and was trying.

2:10 AM BBT – Taylor discussing nom options. She wonders about Turner and Terrance but Turner points out what if Terrance wins Veto.

2:15 AM BBT – Monte has joined. Brittany says the girls Taylor is trying to protect aren’t like her and act much differently when they’re not with Taylor. Monte agrees that he’s heard things the girls have said and done.

2:20 AM BBT – Taylor is leaning toward nominating Terrance and Indy.

3:10 AM BBT – Kyle talks with Taylor and she’s explaining the Indy & Terrance noms. He says he can help ease the shock and so can Joseph. Kyle reassures Taylor that the LO alliance comes before his showmance.

3:15 AM BBT – Kyle says he was really trying on the comp and she beat him fairly, he didn’t drop.

3:20 AM BBT – Kyle got Joseph up to the HOH room so he could talk with Taylor. She updates him on the Indy & Terrance idea. She worries about past promises made. Joseph says he’ll support her.

3:50 AM BBT – Monte is back and suggests nominating Indy and Alyssa.

4:10 AM BBT – Taylor worries to Monte about the two of them being on the Block together. He says he does not plan on letting the other side winning anything. Taylor points out Jasmine won a pie eating contest.

4:30 AM BBT – Mixed company gathers in the HOH room as Jasmine and Alyssa have joined the LOs.

4:50 AM BBT – Jasmine and Alyssa go back downstairs. Talk returns to who to nominate.

5:15 AM BBT – Taylor finally gets alone time in the HOH room to relax.

Plenty of options for Taylor as she tries to decide how best to approach this week. She’s made promises she may not be able to keep and seems to regret that, but it shouldn’t stop her from doing what she wants to do with her nominations and target this week. So will Terrance end up the target or could we see that shift?