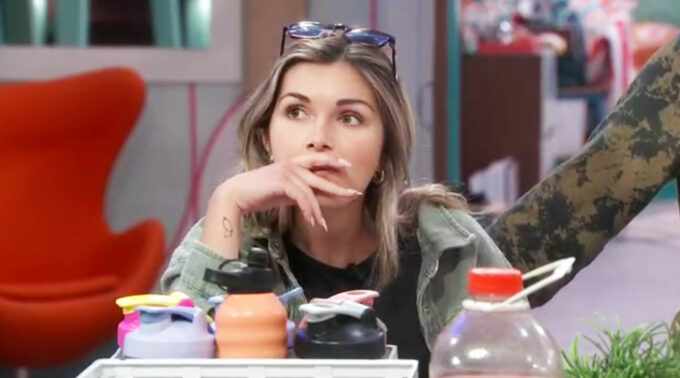 It was nomination day inside the Big Brother 24 house, but it wasn’t as lively as the past couple of big event days. Monte set his backdoor plan in motion with his nominations, but he and Joseph decided if that plan falls through their backup plan will be really easy and a pretty good move in itself. Read on to find out what Monte is thinking, and how his nominees are feeling after finding themselves on the block Friday afternoon.

4:45 pM BBT – Monte tells Joseph that Michael and Brittany are going to plant the seeds with Indy for her to join them if Alyssa is evicted this week.

4:48 PM BBT – Kyle says he feels bad for Alyssa after the Ameerah thing and now being nominated. He says he feel bad because she trusted him a lot.

4:52 PM BBT – Monte and Joseph talk about how easy it would be to just get Alyssa out this week. They think even Jasmine will vote her out.

5:10 PM BBT – Joseph and Monte talk about wanting Taylor to feel comfortable in the house, but realize she can’t with Daniel and Nicole there. And also Indy, Joseph adds.

5:14 PM BBT – Monte decides that if Nicole and Taylor compete in veto and win then Alyssa can be the easy target. But otherwise, he needs to think about Nicole as a backdoor because she’s a threat and she is one major reason Taylor doesn’t feel free to even walk about the house.

5:18 PM BBT – Michael tells Indy that if she is still on the block at the end of the week she has his vote.

5:45 PM BBT – Kyle is hiding in the storage room to scare Nicole, but before he can Nicole starts crying to Michael and tells him she thinks she’s going home this week. He tells her not to say that and says there’s a lot of week left. Nicole says whatever Taylor has promised Monte it’s clearly working.

5:50 PM BBT – Nicole says to Michael that she obviously wants to win this game and thinks she can make it to the end but thought it would be easier with that alliance. She says now that it’s dismantled she doesn’t understand how it had anything to do with her.

6:02 PM BBT – HGs cooking, chit-chatting and getting ready for dinner.

6:14 PM BBT – Jasmine says she doesn’t want to be picked for veto. Daniel says he does because he wants to win to make sure he can’t go up. He says Monte told him he was an option to go on the block today.

6:20 PM BBT – Monte checks in with Indy. She says she’d doing OK but is just confused if he nominated them to protect the boys or if he trusts her enough to help him achieve his goal this week. He says the latter is 100 percent it. Monte says there is no intention of protecting the guys. He says Michael has already been up enough and he could have put up Jasmine and Turner if he wanted them to win veto. Monte tells Indy that Nicole and Taylor are the target, so couldn’t put them up outright. So he only had two options.

6:27 PM BBT – Monte tells Indy if she goes home this week then something went horribly wrong.

6:48 PM BBT – Kyle tells Brittany and Taylor that Kyle wanted to scare Nicole so he got her in the storage room while Kyle was hiding in the cabinet and Nicole immediately started crying about going home this week. He says she keeps going on and on while Kyle is still hiding. When Nicole learns Kyle is in there she says she knew it all along.

6:52 PM BBT – Kyle tells Alyssa about hiding in the storage room. He acts mad at Michael for letting it drag on for so long.

6:55 PM BBT – Michael tells Britany and Taylor that Terrance talked about trying to pitch to Monte to target Nicole this week. He says that’s good that there is someone outside their group that also wants Nicole out.

7:45 PM BBT – Nicole tells Daniel and Terrance about Kyle trying to scare her and how he overheard everything she was saying. She says she thinks it worked to her advantage though because Kyle might feel bad for her now.

8:05 PM BBT – Indy is telling Michael and Brittany that she was very upset with them for not telling her about the vote flip.

8:55 PM BBT – Joseph and Kyle contemplate if Taylor gets picked to play and wins the Veto then it’d have to be Kyle with Daniel going up. They wonder how Monte would handle the situation.

10:05 PM BBT – Alyssa mentions she was about to go on Love Island season one, but then she was talking with Robyn Kass about her interest in Big Brother… (feeds cut away).

10:35 PM BBT – Kyle telling Alyssa he’s attracted to her but is restraining himself. Alyssa mentions that Turner told Jasmine she knew what was going to happen, but says Turner did not tell her.

10:40 PM BBT – Monte and Kyle discuss the vote and still feel good that they’re in control of the situation.

11:00 PM BBT – HGs hanging out in the HOH room with general chatter.

11:20 PM BBT – HGs wondering when the first double eviction will arrive and if it could be next week.

11:35 PM BBT – Leftovers (without Brittany) in HOH room. Turner points out that Brittany gets blamed by the other women for everything. They think Indy would go after Brittany or Taylor if she got HOH. Kyle notes Alyssa isn’t giving him game info anymore.

11:40 PM BBT – Indy talks with Alyssa about how they were left out of the blindside.

11:55 PM BBT – Nicole joins Indy and they discuss the Taylor situation and not wanting anyone to feel left out anymore.

12:05 AM BBT – HOH crew discuss how Nicole almost won HOH and that would have been something right after the Ameerah blindside. Michael notes if Nicole stays this week then Terrance would still go after her.

12:20 AM BBT – Nicole reiterates to Indy and Alyssa that she did not know what was going on last week with the vote flip. Nicole worries whether or not Monte trusts her.

12:35 AM BBT – Nicole thinks the first double eviction will be at the end of the Besties twist with a trio going up on the Block and two getting voted out.

12:40 AM BBT – Indy tells Alyssa that she doesn’t trust Kyle. Alyssa is okay with that.

12:50 AM BBT – HGs discussing ghosts, etc. Daniel shares that he his psychic abilities to see spirits.

Big day ahead with the Veto comp on Saturday as the Leftovers are pushing forward on their plan and working over Daniel and Nicole to lull them into a false sense of security before the hammer drops.