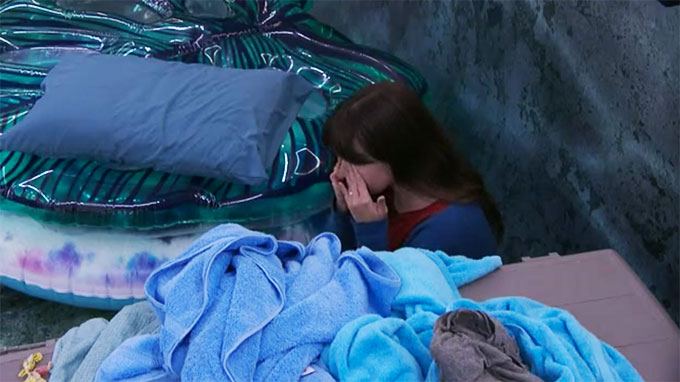 The Big Brother 24 nominations and plans are set for the week, with the whole house currently aligned on what needs to go down as far as who is the target and the backup target. Brittany, who apparently volunteered to be a pawn, isn’t taking things very well, but meanwhile, the rest of the house is almost giddy as the plan to backdoor Taylor this week has been set in motion.

4:55 PM BBT – Joseph and Nicole are whispering about something that happened while the feeds were down. Nicole tells Joseph that she trusts him, Daniel and Michael and that’s part of why she got so emotional. Nicole says no one has asked her what happened, but she’s going to just tell them she got emotional over her ex. Joseph says he won’t say anything to anyone.

4:56 PM BBT – Nicole and Joseph think she will get some kind of power or something if Taylor gets evicted and Nicole, her partner, is left without a partner.

4:57 PM BBT – Nicole tells Joseph she doesn’t want him to think that she was ever coming after him. He says he knows that and they agree to stick together. They talk about how they were raised the same way and they have a lot in common.

4:58 PM BBT – Kyle tells some of the others that he thinks Nicole really wants them to go up after veto so Taylor can go home because Nicole thinks she’ll get safety or some other power.

5:01 PM BBT – Ameerah asks Michael if Brittany is aware they are pawns this week. Michael says that Turner told them. Ameerah says watch out because Brittany might start getting a little crazy. Monte says to make sure she focuses on meditation.

5:02 PM BBT – Monte says he feels like this week is kind of done already and there’s nothing to talk about. Ameerah says yeah, everyone is actually aligned. Kyle says this is how the first couple of weeks should be.

5:30 PM BBT – Ameerah talking about how she thought she was the only one not feeling Indy but it seems like Daniel and Turner cannot stand her. Kyle says Indy has definitely been more irritating lately.

5:33 PM BBT – Kyle and Ameerah think that Indy is famous in Brazil. Kyle says Indy has a charity or non-profit so she has to have money.

5:35 PM BBT – Kyle and Ameerah agree they feel good about working with Daniel. Kyle says Terrane is pretty chill too and he sees him getting to the end because he’s not ruffling any feathers and won’t be a threat.

5:39 PM BBT – Brittany walks in and Ameerah tells her she has to win the veto.

5:40 PM BBT – Ameerah tells Brittany and Michael if she plays in the veto she will throw it to them. Ameerah says the whole house is aligned with getting Taylor out.

6:22 PM BBT – Alyssa says she hopes she doesn’t have a flesh-eating virus.

6:42 PM BBT – HGs are still trying to figure out how this besties twist will work and for how long.

7:12 PM BBT – Turner asks Taylor how she feels about the nominations. And she says she was happy for her face to not show up on the wall. She thanks him and says she hopes she’s not going to be backdoored. He tells her no, this is not that calculated, and he said he didn’t want to do that to her a third week win a row. He says it seems like bullying at that point and unnecessary (but that does seem to actually be the plan this week).

7:15 PM BBT – Taylor tells Turner whatever he needs her to do to help him get his target, she’s there to help. She mentions them talking about his target back in Week 1, and assumes it’s the same target (looking back, Turner’s Week 1 target was Michael, but that doesn’t seem to be the case now…)

8:20 PM BBT – Brittany is crying alone in the have-not room, saying it’s so hard. “It’s just a really awful feeling to feel like you don’t fit in and not know what to do about it.”  She says she’s not even sad about being nominated, she’s sad because she doesn’t see how she’s going to be able to make it if today is only Day 17. She says she misses feeling understood and misses her family.

8:23 PM BBT – Brittany says she such an introvert and she doesn’t know how she passed the test to be there. Brittany asks herself why she can’t be like Alyssa. She says everyone loves Alyssa and she doesn’t offend anyone.

9:08 PM BBT – Brittany is still upset and by herself in the have-not room.

9:09 PM BBT – Ameerah tells Michael that this is an easy week and they don’t need to worry. Michael says he just wants Brittany to feel calm. Ameerah says she will use the veto on them if she wins and says Joseph will as well. Ameerah says and plus if they don’t win veto, Michael is going to be fine anyway because Brittany would go home. He says yeah, but he would feel bad because he picked Brittany as his partner.

9:10 PM BBT – Michael and Ameerah wonder if the veto will be played as pairs. They think it will be because they’re really pushing the besties thing.  Ameerah says Brittany just needs to chill and work on her social game. Michael says he can’t believe that Brittany volunteered them to go on the block. Ameerah says she doesn’t understand Brittany’s game.

9:11 PM BBT – Indy is addressing an issue she had with Taylor. Taylor said the slop soup isn’t that bad, and Indy, who is a have-not, felt disrespected by Taylor over that. Taylor apologizes and thanks her for coming to her about it. They hug after talking.

9:13 PM BBT – Ameerah asks Michael if he knows who the next three targets are. He says yes, and asks if he’s OK with going up again (so Brittany can be the target). He says of course he doesn’t want to go up again, but if that’s the plan … he then asks why aren’t they trying to get Turner out before Brittany and Indy. Ameerah says she really wants to, and if they get the chance they should, but also Brittany is spiraling and her staying longer won’t be good for any of them. Michael says he gets it. But Ameerah says he’s right and agrees they should be going after Turner ASAP.

9:15 PM BBT – Ameerah says Turner would have been her target this week. Michael asks Ameerah if she’s concerned about the guys thing. They both agree it’s not really a concern now since Monte told them about it and they have Kyle on their side anyway.

9:18 PM BBT – Brittany finally comes out of the have-not room. She’s still upset but joins Michael and Ameerah in the kitchen to help clean up.

9:28 PM BBT – Taylor says to herself, why is it that so much of what she says rubs people the wrong way and comes off as abrasive. Nicole just said something to Indy, and Taylor says if she said that people would get upset.

11:00 PM BBT – Nicole says Taylor told her they would need to go after the other girls. Nicole says she’s having trouble keeping up with her own lies.

11:15 PM BBT – Turner is hanging out in the HOH room camtalking a little. He thinks today went well with getting to talk to everyone and taking it easy.

11:50 PM BBT – HGs lounging around. Indy isn’t happy to have a restricted diet on HN.

12:55 AM BBT – Michael camtalks that he’s thrown two comps to hide his abilities. He is ready to play tomorrow for the Veto.

1:25 AM BBT – Indy is working to get Kyle upstairs to the HNs so Alyssa can try and kiss him.

2:00 AM BBT – Kyle tells Monte, Turner, and Joseph that he is not planning to make a move on Alyssa. They’re on TV and he takes things slowly. Turner says it’s good to consider your game.

2:45 AM BBT – HOH group wonders why Michael would have picked Brittany since the vote could flip against Michael. Kyle notes that Michael seems to be hiding his BB knowledge and knows about the online communities for fans. Kyle says he only watched BB16 and BB20.

2:45 AM BBT – Downstairs Nicole, Daniel, and Ameerah are chatting. Daniel suggests getting out Michael since he’s a superfan and could win at the end.

3:05 AM BBT – HOH group (Turner, Monte, Joseph, and Kyle) still chatting. They wonder about how Taylor survived after the girls were all after them.

3:15 AM BBT – Downstairs Ameerah is still talking with Daniel and Nicole. Ameerah leaves to check the time and Nicole quickly tells Daniel he shouldn’t mention targeting Michael because he isn’t supposed to know about Po’s Pack. Daniel didn’t realize that alliance was real.

3:30 AM BBT – HOH crew is wondering if Ameerah was who told Indy that Joseph and Pooch would target her (I). Pooch had told Ameerah and the next day Indy was saying there was a rumor about Pooch would go after her.

3:40 AM BBT – HOH room discussing Ameerah. They say Ameerah is a version of Taylor with a better social game. They think she is really smart and would be an emotionless game. Group thinks they probably need to stick with going after Taylor instead of Ameerah this week.

3:50 AM BBT – The guys decide if Brittany goes this week then they want to bring Michael in. They don’t like him paired with her in general in the game because if they tell him anything then he runs it back to Brittany.

The HGs aren’t immune to changing their minds here which puts Michael in a trouble spot depending on how this Veto goes on Saturday. They could always decide to knock out a bigger threat like Michael should he stay on the Block with Brittany come Thursday night. Meanwhile, Taylor remains a top target but it all depends on the Veto for that opportunity.