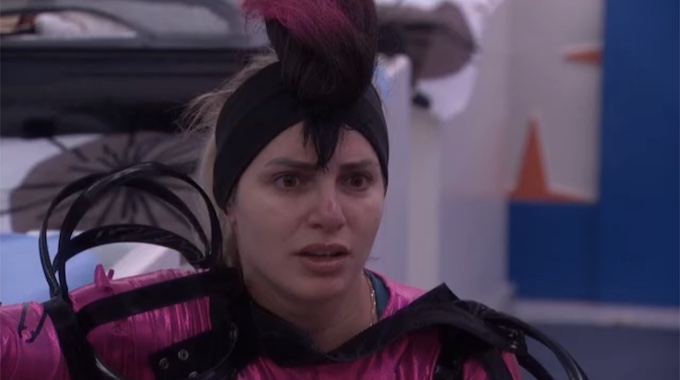 It is Eviction Eve inside the Big Brother 24 house and it started off pretty quiet with the houseguests keeping the plan for tomorrow night’s vote under wraps. There were some conversations about some of the Big Brother houseguest’s votes wavering and that gave one houseguest the idea to go tell this week’s target that they might not be as safe as they think. Read on to get all the details of what has gone on inside the BB24 house so far today!

11:00 AM BBT – Big Brother has played the “What do you not understand about please wake up?” message several times now. Only Taylor and Joseph seem to be awake.

11:40 AM BBT – BB calls for Indy to perform in the living room. Alyssa joins her.

12:00 PM BBT – Michael, Jasmine, and Terrance are talking about missing their wedding rings. They talk about how Brittany was brave for wearing her real one in the house. Terrance says even the fake one he is wearing feels like it’s going to fall off during comps.

12:15 PM BBT – Brittany is going over what she is going to say to Indy or what she is planning for her GBM. when she tells her she is voting her out. She plans to tell her she knows about Five Swatters and how she hoped that Indy would tell her about it herself. However, she didn’t which means she doesn’t want to work with Brittany in this game.

1:00 PM BBT – Jasmine tells Indy how everyone but them, Alyssa, and Terrance were in the HOH room all night last night. Jasmine says that makes her paranoid.

1:05 PM BBT – Brittany and Michael are wondering how they can get Turner, Kyle, Joseph, and Monte focused on each other so that them and Taylor could slide through without being targeted.

1:11 PM BBT – Indy joins the conversation with Brittany and Michael. She tells them that Jasmine told her that they might have been up late talking about her. She asks for reassurance, they tell her that she is still fine.

1:15 PM BBT – Michael says that he is annoyed that Taylor has changed her mind over and over about who the target is. Brittany agrees that it’s frustrating. Michael says that they are all doing the same thing that they made fun of the others for (staying up late together and leaving the HOH together).

1:17 PM BBT – Michael says that he can’t decide if Monte or Joseph should go first. Says he wishes he could have a conversation with Jasmine, but he can’t trust that she won’t run to Joseph with the information. Brittany says she feels the same about Alyssa.

1:20 PM BBT – Indy tells Jasmine and Alyssa that there was no game talk upstairs last night. Says that Michael told her he waited up to see if they were going to talk, but they didn’t.

1:25 PM BBT – Indy leaves the room for a second and Alyssa tells Jasmine that they have to talk about what they are going to do.

1:33 PM BBT – Michael tells Taylor, Joseph, and Turner about how Indy came up to him and Brittany in the storage room freaking out because everyone was upstairs all night. Michael wonders what they should do about them suspecting things. Taylor says that the door is open for them to come up too.

1:40 PM BBT – Indy goes upstairs to grab Brittany and sees who else is in the HOH room. She runs downstairs and tells Alyssa and Jasmine. Alyssa heads upstairs.

1:58 PM BBT – Monte and Terrance are talking in the bedroom about tomorrow. Monte says he has no reason to want to see him walk out of the house. Terrance says that Jasmine told him she just doesn’t want to see another girl get voted out and Terrance questions why it has to be a girl/guy thing. He also says that he feels really good with Turner, Monte, Kyle, Alyssa, Michael, and Brittany which gives him six votes.

2:00 PM BBT – Brittany tells Jasmine that their talk made her feel better because now she knows that she isn’t the only one wavering with this vote.

2:13 PM BBT – Brittany asks Indy how she is feeling and she says that with Michael and Brittany, she feels good. Brittany plants a seed that people that Indy said she felt good with are expressing doubt when talking to her (B). Indy says that she felt really good about Alyssa and Jasmine, Brittany shakes her head. Indy says that she also felt good about her, Michael, and Joseph and she also shook her head. Brittany says the only person she feels comfortable speaking for is Michael, insinuating that Joseph is wavering.

2:16 PM BBT – Indy thanks Brittany for letting her know and that she will talk to them again. Brittany asks that she doesn’t say anything about her telling Indy. She says she won’t. Brittany says that she hates that everyone needs to know where everyone else is voting in order to make a decision.

2:20 PM BBT – Brittany tries to spin it like maybe Jasmine and Alyssa were lying to test her. Indy then asks her if she is still voting for her and Brittany tells her she hasn’t made a decision either way because she doesn’t what everyone else is doing.

2:30 PM BBT – Brittany tells Indy that she can’t be 100% until she knows the truth. She wonders why everyone is toying with her. Indy says that she will wait for them (Alyssa and Jasmine) to come in so she can talk to them. Indy asks if they say that they are 100%, Brittany says she would have to trust that it’s true.

2:32 PM BBT – Brittany asks if Indy is in any other alliances. Indy denies it and says all she has is them (her, Michael, Alyssa, and Jasmine).

2:38 PM BBT – Brittany tells Indy that there has to be another alliance in the house. Indy says “you think?” Brittany says that it doesn’t make sense otherwise.

3:05 PM BBT – Kyle tells Jasmine that he talked to Terrance and Terrance explained to him that he wouldn’t have voted against him if he knew that he wasn’t safe. His vote last week was a sympathy vote for Daniel. Kyle also tells Jasmine that Indy has consistently told him and Alyssa that their relationship is bad for her game and is constantly yelling at him. Jasmine says that she completely understands and he doesn’t have to say anymore. She knows where this is going.

Brittany might be playing with fire telling Indy that her closest allies might not be trustworthy. Kyle has also confirmed with Jasmine where his vote lies. Things could get a little messy when Indy finds out she is likely not going to survive tomorrow night’s eviction. What do you think about Brittany’s move to tell Indy about Alyssa, Jasmine, and Joseph wavering with their votes? Do you think it was a smart Jury Management move or will this put a target on her when the Leftovers find out?