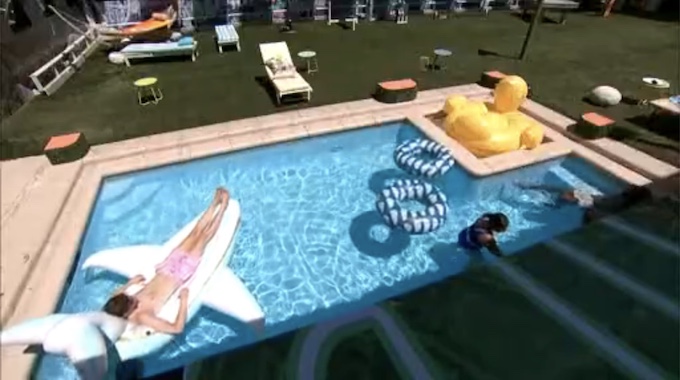 It was a pretty quiet day inside the Big Brother 24 house with the houseguests getting a late wake-up call and then spending some time out in the backyard. Taylor and Joseph are taking advantage of them having to be chained together to get some time away from the rest of the Big Brother houseguests and do some studying for upcoming comps. Also, is Taylor regretting not taking a bigger shot this week on BB24? Find out here!

11:15 AM BBT – Michael is talking to himself out in the hammock about not underestimating the other competitors in his alliance.

11:18 AM BBT – Alyssa joins Michael outside and asks what time he went to bed. She notes that tonight is going to be a long night since it’s Jasmine’s birthday. Michael hopes they still have the backyard.

12:00 PM BBT – More of the houseguests are getting up and moving around, but most of them are still laying in bed.

12:20 PM BBT – Terrance is applying tattoos in the bathroom as Monte is outside working out.

12:30 PM BBT – Taylor and Joseph are talking about the past competitions and whether they were phsyical or mental and who won.

1:10 PM BBT – Terrance comes up to talk to Joseph and Taylor. He is campaigning to Joseph. Says that he has a lot to offer when it comes to benefits to their game. Says he has never wavered when it comes to them. Terrance leaves and Joseph tells Taylor that Terrance has his vote.

1:15 PM BBT – Taylor tells Joseph that she doesn’t trust Terrance because as much as he says he wants to make a big move and put Kyle and Monte up, she doesn’t believe that he would put Alyssa up as a renom like he says. She says that she should have taken a shot at Alyssa this week and this is exactly what she didn’t want to happen. She says her HOH is a “fumble”.

1:21 PM BBT – Taylor and Joseph are talking about how they should stage a “break up” so that they aren’t linked to each other anymore. Joseph also suggests and Taylor try to distance herself from Brittany a bit.

1:40 PM BBT – Kyle has joined Joseph and Taylor in the HOH room. Kyle tells Joseph that he is confused. He says that Michael, Brittany, and Turner all told him that they wanted Alyssa to stay, but Joseph says that they were all on board to get her out.

1:45 PM BBT – Joseph mentions that getting rid of Alyssa was what was best for the Alliance. Joseph also mentions that this week would have worked out well too because he could have just put the blame on Taylor. Taylor says that Michael and Brittany were indifferent but leaning more towards Alyssa and Turner was flip flopping but willing to vote Alyssa out.

2:00 PM BBT – Talks turn to Jasmine and how she is flipping out about “her” missing granola and bag of baked Lays. They are all curious as to how they are “hers” even though they are for the house. Taylor says she is going to start locking the door so that she can’t come looking for them in her room.

2:35 PM BBT – The houseguests are all hanging out outside. Indy tells Kyle that he did the cutest thing last night when he came into the room to say goodnight to Alyssa.

2:38 PM BBT – Kyle goes inside and tells Alyssa about Indy saying that in front of everyone who was outside.

3:00 PM BBT – The HGs are all relaxing and chatting about Michael’s wedding and how much fun it is going to be.

Pretty slow day, but Taylor is definitely upset that her Head of Household ended up being a dud thanks to her fellow alliance member not wanting to see his girlfriend go up. As of right now, it looks like the plan is still for Indy to go. However, Taylor doesn’t think that either of this week’s options are going to be impactful enough for her resume.