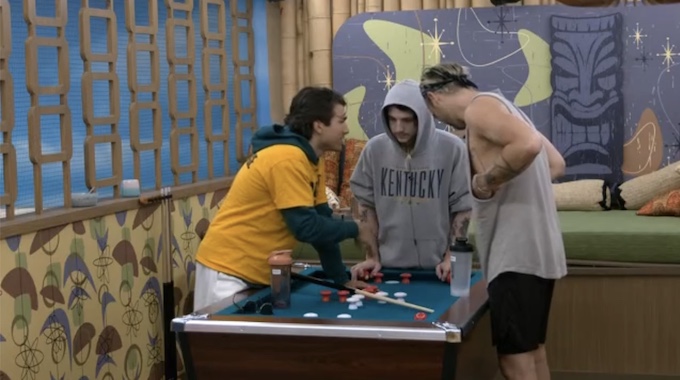 10:00 AM BBT – Daniel, Terrance, and Alyssa are talking in the kitchen and Daniel is pleading with them that if they win HOH to please not make him a have-not. He says that he really just wants to sleep downstairs with everyone else and have a normal week.

10:10 AM BBT – Michael tells Brittany that he got up early to check the storage room for a hidden power or something. He tells her he didn’t find anything and doesn’t even know if anything like that has ever happened.

10:12 AM BBT – Michael tells Ameerah that it sounds like people in the house want Turner and Pooch out, Ameerah says that she doesn’t think it’s everyone, just their alliance and maybe some of the other girls.

10:15 AM BBT – Michael says some people want him to win HOH so he could take the shot and he says he would be willing to do that.

10:25 AM BBT – Taylor asks Alyssa if she has done anything to make her feel uncomfortable or out of place. Alyssa says no, but mentions that she heard about Taylor saying that Paloma was trying to target someone next week. Taylor tells Alyssa that she heard that some people were upset with her (T) for spending so much time with the guys, but she didn’t intend for it to look like she was avoiding the other girls.

11:00 AM BBT – The HGs are all lounging or working out. General chit chat.

11:20 AM BBT – Pooch is telling Kyle and Turner about a conversation he had with Brittany who tipped him off that there are two girls in the house that are looking to target him next week.

11:27 AM BBT – Pooch is retelling his conversation with Brittany to Daniel saying that Brittany was telling him that Ameerah was going to target him if she won HOH. He tells Daniel that he thinks that she is trying to build trust with him so that he will keep her over Paloma or Alyssa if he has any say in the Backstage Twist.

11:55 AM BBT – Kyle is filling Monte in on the situation with Pooch and how it’s causing him to play really hard. They talk about Paloma and her erratic behavior. Monte mentions that if Paloma keeps acting this way, they might need to veer away from that alliance and sticking with the guys. Kyle is concerned that Pooch and Turner might be wildcards later.

11:58 AM BBT – Monte says that the ideal week next week is that Michael wins HOH and puts up Pooch and Turner. Kyle agrees.

12:05 PM BBT – Monte is now talking to Ameerah and Michael about his conversation with Kyle. Monte mentions that if someone other than Michael wins, then Indy and Brittany are good options.

12:08 PM BBT – Monte tells Michael that there has been some speculation about a guys alliance. He tells them that Pooch did try to start something, but he is loyal to the alliance they have (Ameerah, Monte, Michael, Paloma, Alyssa, and Kyle).

12:30 PM BBT – Ameerah tells Michael that she is really bummed that Brittany went and told Pooch about Ameerah looking to target him. She thought that Brittany had her back.

12:32 PM BBT – Michael camtalks about his disappointment with Brittany and adds that he has to win HOH in order to save her.

2:10 PM BBT – Monte and Joseph are talking in the Storage Room and Monte asks Joseph if he heard about Brittany telling Pooch that Ameerah was targeting him. Joseph says that he did and also tells Monte that Brittany wasn’t lying about that. He confirms that Ameerah told him that she was targeting Pooch directly.

2:30 PM BBT – Nicole opens up to Daniel and Jasmine about her experiences leaving the church when she realized that she was gay.

2:45 PM BBT – Joseph talks to Terrance and they compare notes on their observations inside the house.

2:50 PM BBT – Turner walks in and Terrance asks him who he would put up if he won HOH and Turner says he doesn’t know. Joseph mentions that Pooch was talking about putting Indy and Brittany up. They talk about the possibility of getting rid of Brittany next week.

3:00 PM BBT – Joseph and Monte promise Terrance their vote for this week. Terrance says that he needs to make sure he is in the loop better because he feels like he’s missing a lot of things.

Brittany made the mistake of telling Pooch that Ameerah was going to target him if she won HOH and now she could see herself on the block in week 2. The only saving grace she might have is Michael winning the HOH and taking a shot at Turner and Pooch, but if Michael wins another competition, that could put a target on his back too. I guess we will have to see how all that plays out.

In the meantime, Taylor is still making her rounds and attempting to right the wrongs that she has been accused of. She plans on talking to Paloma one on one at some point to try and smooth things out after being told by several people that Paloma heard she was name-dropping. Stay tuned for more on that tomorrow!