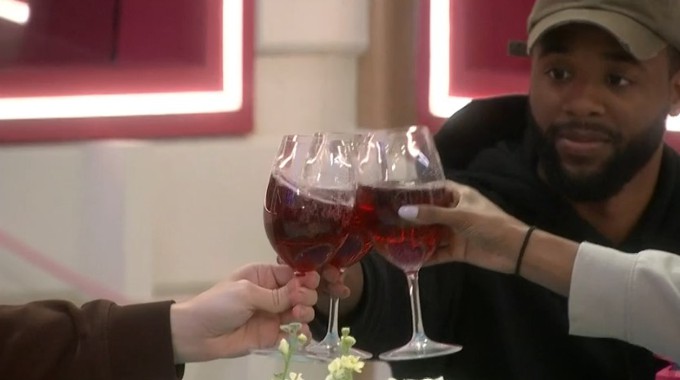 Welcome to the final Live Feed Highlights Report for the Big Brother 24 season! It’s been a long time coming and we’re grateful that you spent the summer with us as the season winded down from sixteen to today’s three Houseguests. One last look at how these HGs spent their day and then we’ll find out who is crowned the winner of Big Brother later tonight.

10:30 AM BBT – Turner joins Monte. They discuss they’ll be saying goodbye to the Feedsters tomorrow morning.

11:10 AM BBT – Monte and Turner wonder if any of the other HGs will have a big secret to drop on everyone tomorrow. Turner says maybe Michael or Kyle.

11:15 AM BBT – Turner plans his finale outfit to be a repeat of his first-night outfit plus a bonus bandana.

4:00 PM BBT – Monte finally gets to packing and realizes he didn’t bring too much with him. He’s also practicing his final speech.

5:00 PM BBT – Turner is studying season stats and Taylor is helping him review.

6:40 PM BBT – Big Brother voiceover tells the HGs they are one day closer to winning $750K.

7:50 PM BBT – HGs back out of the Jetsons room lockdown. Monte and Turner discuss they’re less than 24 hours from the vote.

8:00 PM BBT – HGs wonder if Kyle will hang out or vanish quickly. Taylor remembers Alyssa said Kyle would leave as soon as he could to get back to his family.

8:30 PM BBT – HGs received a six-pack of blackberry hard cider. They head to the kitchen to enjoy it.

9:00 PM BBT – Taylor says she thought Brittany’s husband might not be real until they got the home videos last week. Now she believes her.

9:20 PM BBT – Taylor talks to herself that she is tired of living with two guys. She’s frustrated that she has to beg the guys to take her to F2 and has one of them (Monte) agreeing so far. Taylor also comments that she thinks Monte is hot but not what she’s interested in.

9:25 PM BBT – Taylor camtalking again. She says she’ll continue to work on Turner so he can see he loses against Monte.

10:20 PM BBT – Taylor says to the camera that this was her comp to lose and she was so ready to win Round 3. She’s frustrated.

10:25 PM BBT – Taylor gives a shoutout to Danielle Reyes (BB3) and says she’s playing this game for her and hopes she has made her proud.

10:35 PM BBT – Monte is back and talking with Taylor. He says he’s trying to decide how to break the news to Turner that he’s taking Taylor to F2. Monte suggests he’ll say that Turner has a big move on his resume but Monte doesn’t so he has to do this to earn the win.

10:55 PM BBT – Monte says it’s tough when Turner talks about them making the F2 and being so excited about it.

11:00 PM BBT – Monte, still discussing cutting Turner, says that Turner didn’t tell Alyssa before he cut her. Monte knows Turner really does expect him to keep him. He really doesn’t want Turner to be shocked though.

11:05 PM BBT – Taylor camtalks her frustration to be in a weak position now after working so hard all season to be in power and play as a champion for women.

11:30 PM BBT – Taylor camtalks that she’s still in the game and can still win this. She believes there remains a way.

11:45 PM BBT – Taylor continues talking and going over her win record with 2 HOHs.

12:00 AM BBT – Taylor working on her F2 speech. She says her game is more than the comps she’s won or the people she’s evicted.

12:45 AM BBT – Still just Taylor practicing her speech while the guys sleep.

2:00 AM BBT – Both Monte and Turner woke up to go to the bathroom. Turner hangs around and studies the Memory Wall. Taylor is still working on her speech.

2:15 AM BBT – Turner asks Taylor to help him study and is going over season stats. Taylor says he’s getting everything right.

2:50 AM BBT – Turner is back at the Memwall studying again.

3:00 AM BBT – Turner uses items in the house to help his studying.

That’s a wrap, folks! We had some good Feeds info with Monte more strongly confirming his plans to cut Turner. I wonder what would happen if Taylor encouraged Monte to tell Turner in advance. Might Turner then decide to return the favor and secure a spot for Taylor in F2? Feeds will be up briefly in the morning for the HGs to say their farewells to us then it’s off to wait for the finale tonight at 8/7c. See you then!