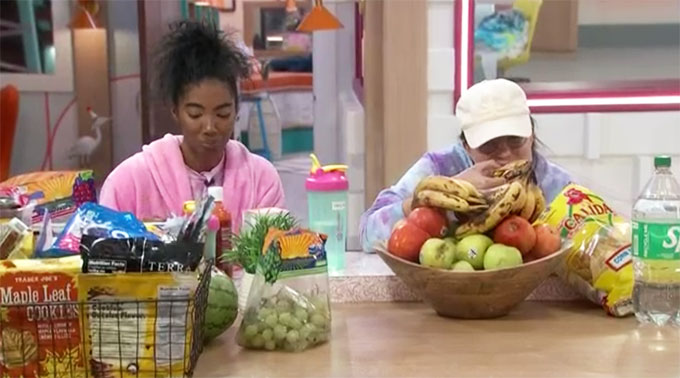 It was another slow day in the Big Brother 24 house as Brittany counted the days until her inevitable eviction, and the other members of the Final 4 spent most of the day just chilling. Brittany did have a Monte bash session with Taylor in the evening, where she decided Monte might have a harder time than he thinks to win the game.

1:05 PM BBT – Feeds went down for a brief time and when they returned the HGs were out of bed.

1:30 PM BBT – Taylor is asleep again. Monte and Turner are having general conversations in the kitchen.

2:15 PM BBT – Brittany tells Turner that she can’t wait to look everyone up online. She wonders what kind of TikToks Kyle and his mom make. Wonders if they dance in their videos. Turner mentions how he is excited to see Michael’s three posts and Jasmine’s superhero makeup (a post on social media that she has talked about). Brittany talks about how much Daniel sounds like Elvis when he sang to them right before his eviction.

2:20 PM BBT – All the cameras are on Taylor sleeping and Brittany laying in bed in the back bedroom.

2:30 PM BBT – Monte is teaching Turner how to shuffle cards and then they start playing.

4:37 PM BBT – Brittany tells Taylor that she thinks Monte has played too safe a game and asks what moves have he made. She says Monte has not taken any risks. She says he played a smart game, but took no risks.

4:38 PM BBT – Taylor says that people said earlier that Monte was using the Xavier playbook. Brittany said, yeah, but Xavier even knew when to finally make a big move by getting Kyland out. She says this would have been the week to make that Xavier move and take Turner out.

4:39 PM BBT – Brittany says she took plenty of risks, and that is costing her the game, but at least she took risks.

4:40 PM BBT – Brittany says Monte has an inflated sense of the game he played. She says the jury might not see his game the way he sees it. Brittany says Turner has made bigger moves and have made bigger risks and survived those risks.

4:41 PM BBT – Brittany says if Monte is trying to be so risk averse to increase is probability to get to final 2, then keeping Turner makes sense. She says but making that non-move is going to seal his fate of getting second place.

4:46 PM BBT – Brittany says Monte is underestimating some of the people he left in jury. She says “if you screw me over and take away my lifelong dream you won’t get my vote.” Brittany says the rules of this game differ from person to person.

4:47 PM BBT – Brittany talks about how annoying it was when Monte was upset with Taylor over her taking the headphones off his head.

4:48 PM BBT – Brittany says that playing a clean game doesn’t mean you have to win. She says Michael made some dirty moves but would have still won if he got to the end. She says he would have still gotten her vote even after he betrayed her.

4:57 PM BBT – Taylor says if she’s the one that gets to the end and cuts Turner, then that’s the move. She says that’s the one she’ll be able to claim that Monte could have claimed from this week.

5:00 PM BBT – Taylor tells Brittany it’s so funny that the two women everyone wanted to do the worst are the only women left.

5:03 PM BBT – Brittany asks how Monte is going to defend against the fact that he was carried by Michael in the game. She says there were several times where the hot topic was to take out Monte, but Michael protected Monte. Brittany says Monte would have even gone home the week that the Kyle information came out. She says she knows the timing of that coming out was iffy, but one thing that is sure, Monte would have probably gone home that week.

5:07 PM BBT – Brittany says if Monte does somehow manage to win, it’s going to be unsatisfying.

5:16 PM BBT – Brittany says Monte seems to think the question comps at the end are going to be really hard, but she says they’re not going to be that hard.

5:32 PM BBT – Brittany tells Taylor that at least she’s in Final 3 and that she thinks she can really do this. Taylor says she will have to come up with the strongest argument. Brittany says that’s what Taylor is really good at, though. Taylor says she is good at speeches. Brittany said that Indy and Joseph said in Week 1, that if Taylor makes it that week she’s going to win the game.

5:33 PM BBT – Monte and Turner are talking about school and other random things.

6:25 PM BBT – The house is quiet. Monte is napping and everyone else is in the kitchen cleaning or making snacks.

6:50 PM BBT – Brittany is alone, talking to herself here and there.

7:42 PM BBT – Brittany is still talking to herself. She’s talking about what she can do out in the real world.

8:03 PM BBT – Brittany is playing pool upstairs by herself.

8:18 PM BBT – Taylor is in the HOH bed going through things that happened this season using M&Ms.

10:25 PM BBT – Monte and Brittany are hanging out in the kitchen chatting about life back home and places they’ve lived.

10:45 PM BBT – Downstairs Turner is up and decides to take a shower. Upstairs Taylor is deciding to enjoy a bath.

12:45 AM BBT – HGs joking about Big Brother being like prison, but in prison you can go outside and read and write.

1:30 AM BBT – HGs making up stories about the other HGs on the Memory Wall.

2:30 AM BBT – Cards continue in the kitchen as Taylor preps some food and the HGs keep going with their stories about the other HGs.

4:00 AM BBT – Everyone is still awake and playing cards.

Things are just as slow as we’d expect here in the final stretch of the season. Brittany seems resigned to her departure on Thursday though she hopes to work over the Jury in Taylor’s favor. There really won’t be much time for that as she won’t be heading to the Jury house with just a few days between her eviction and finale night on Sunday.