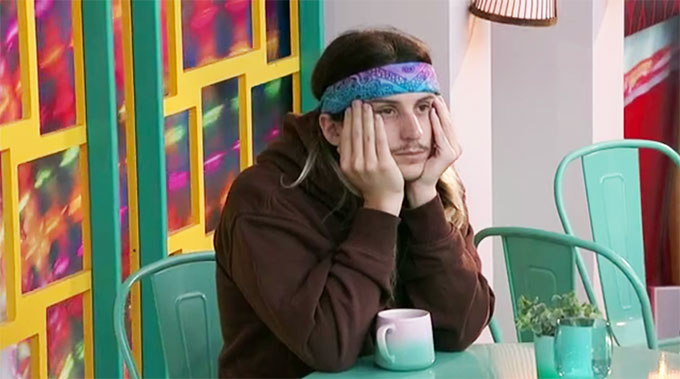 It was a reasonably quiet start to the day inside the Big Brother 24 house. Brittany had an opportunity to talk to Monte about why he should keep her going into the Final 3 of Big Brother. Did this pitch help sway things in her favor or will Monte go with keeping Turner during this week’s live eviction on BB24? Read on to find out what her pitch was and if it worked at all.

11:15 AM BBT – Taylor is up now and sitting outside. Monte also heads outside but sits up on the balconey while Taylor lays in one of the lounge chairs.

11:31 AM BBT – Brittany enters the HOH room to go over the M&M graph she made for her pitch to Monte with Taylor. She realizes she woke Taylor up and tells her they will talk later.

12:12 PM BBT – Monte tells Brittany that if she wants to chat, he will be outside on the balconey. She tells him that she will finish what she is doing and head out there.

12:25 PM BBT – Brittany says that they (M&T) have played similar games. Both founding members of the Leftovers, both involved in some of the big moves, but Turner has made some of the bigger moves. She is pushing that Monte taking Turner out, might be the big move that the jury needs to vote for Monte to win.

12:40 PM BBT – Brittany is now pitching that while Monte’s chances of getting picked for F2 are higher with Turner there, him winning the Final HOH and making it on his own are higher if Brittany is there.

12:45 PM BBT – Monte says that objectively, what she is saying makes sense, however, he knows that if Taylor or Brittany win the final HOH, they would take each other over him. Therefore, he has a 33% to make it to F2 if he keeps her, but almost 100% chance if he keeps Turner.

12:47 PM BBT – Brittany wonders how certain he is that Turner would take him, because strategically, it doesn’t make sense for him to take Monte.

1:10 PM BBT – Monte is closing out his conversation with Brittany and she is still trying to convince him that she is the better choice.

1:20 PM BBT – Monte tells Turner about Brittany’s pitch. Meanwhile, Brittany is in the back bedroom alone and deep in thought.

1:45 PM BBT – Monte, Turner, and Brittany are outside having general conversations.

2:10 PM BBT – Brittany heads up to the HOH to see Taylor, but she is still sleeping. She heads outside to the hammock.

3:00 PM BBT – All is quiet in the Big Brother house. All cameras are on Brittany in the hammock and Monte walking around the backyard.

3:46 PM BBT – Brittany tells Taylor that the only thing she has left to do is come up with a killer speech. She says it won’t save her, but at least it can go down in history as a good speech that Monte can reflect on when he loses against Turner.

3:48 PM BBT – Brittany tells Taylor to be careful with how she is with Monte so that he doesn’t take Turner to the end out of spite. Brittany says that Monte thinks he can beat Turner, but she doesn’t think he can.

3:48 PM BBT – Taylor tells Brittany that it sucks that if she doesn’t get Brittany there, then she (Taylor) can’t win either.

3:51 PM BBT – Brittany says she doesn’t want to give up and says she can’t go home. She’s upset because she promised her husband she would win. Brittany says Monte and Turner are locked in, and they’ve always been locked in. She says if Michael would have listened to her they wouldn’t be in this position now.

3:52 PM BBT – Brittany tells Taylor that Monte let her know that the four guys were known as The Pound. She says there’s no way he’s budging on Turner.

4:30 PM BBT – Monte says he prefers that Taylor. He says, but to be honest, he finds it a little concerning to think that she feels she has to be one person in one situation and another person in another situation. He says she should just always be herself.

4:31 PM BBT – Taylor says she feels that she’s kind of in the middle, but then gets accused of swinging one way or the other.

4:32 PM BBT – Monte says she embraced that Zingbot zing. She says it was just part of the joke and that she’s not really an icy person.

5:20 PM BBT – Everyone is quiet again. Brittany and Turner are asked by BB to raise the outside awnings.

6:26 PM BBT – Turner is partaking in some very intricate tie-dyeing.

6:39 PM BBT – Brittany has been cam-talking for a bit. She says that she doesn’t think Monte has even played that great of a game. She says she could be wrong, but she sees that he got protected by Michael for far too long, won one random veto and took Michael out, and he’s been set on her since then. She says that’s not even that impressive.

6:50 PM BBT – Now Turner is talking to himself. He’s just talking about what he will be able to do when he’s finally out of the house.

7:27 PM BBT – Taylor tells Monte that they could both beat Brittany. Monte says he thinks they can beat Turner, too. Monte says he can’t operate in fear of Turner. He says there’s been enough cases where they’ve beaten Turner already.

7:30 PM BBT – Brittany and Turner are so bored they’re talking to each other about how boring it is. Brittany says “send me home already.” Turner says it’s going to be like this until Thursday, and then they’ll be stuck inside soon too. Brittany asks what they are even putting in the episode. Turner says that’s a good question.

7:31 PM BBT – Monte tells Taylor the more they compete against Turner, the more they’ve been showing they can beat him. He says especially as things become more memory and about what happened in the game. Monte says if it were just her and Turner in that last HOH, Taylor would have won without a tie-breaker.

7:35 PM BBT – Taylor asks Monte if he thinks she’s easier to beat than Turner. Monte says Turner’s resume is stacked and that there is a higher likelihood that he would win against her. He says but there is a chance he loses, and if he were to lose, he’d rather lose to her than Turner. Taylor says she doesn’t think he loses sitting next to her. Monte says unless he has royally screwed some people in the jury.

7:36 PM BBT – Taylor says there’s no way in Hell that Terrance or Indy vote for her. Monte asks Taylor if she ever had a conversation with Indy. Taylor says she tried, but Indy made it very clear that she wasn’t interested in talking to her.

7:46 PM BBT – Taylor tells Monte as long as he’s being honest and he doesn’t have something locked in with Turner, she can live with this Final 3. Monte says he’s telling her as he has before, that he’s choosing her. He says those words have not come out of his mouth to Turner (they have actually). Monte says he can live with that decision morally, and it feels like it’s the decision that would best benefit his game and Taylor’s game. He says it wouldn’t make sense for him to take Turner because their games are too similar and the jury would have to really debate the win.

8:15 PM BBT – Monte and Taylor are still going over Final 3 plans and chatting about other things while cuddling in the HOH bed.

8:55 PM BBT – Monte describes how he wants to be seen as playing a clean game since it’s often expected for male players to backstab.

9:15 PM BBT – Monte has come back downstairs. He joins Brittany and Turner playing cards in the kitchen. Taylor stays upstairs in bed.

11:00 PM BBT – Taylor has joined them downstairs at the table for cards.

11:50 PM BBT – HGs head outside for their last night of the backyard this season.

12:15 AM BBT – Turner brings out coffee. Brittany declines but everyone else has some.

1:00 AM BBT – HGs still hanging out in the backyard and chatting.

1:40 AM BBT – Taylor wonders if they’re the coolest F3. Turner points out there are still four of them.

2:30 AM BBT – HGs realize it’s their last few hours in the backyard unless any of them get to come back from an all-stars. They discuss if Michael would come back to play again. Turner thinks it’d be funny to have coaches but make one of them messy.

3:30 AM BBT – HGs continue their all-nighter in the backyard just hanging out.

4:00 AM BBT – Turner and Brittany are bundled up in blankets (separately of course) but everyone is hanging in there to stay up all night.

Monte is putting himself in the corner here as he’s promised Turner and Taylor a spot in the F2. Perhaps he plans to bail in the comps and let each of them take him instead? Tough strategy. He did briefly seem to be open to keeping Brittany during his talk with Taylor, but that’s still very unlikely.