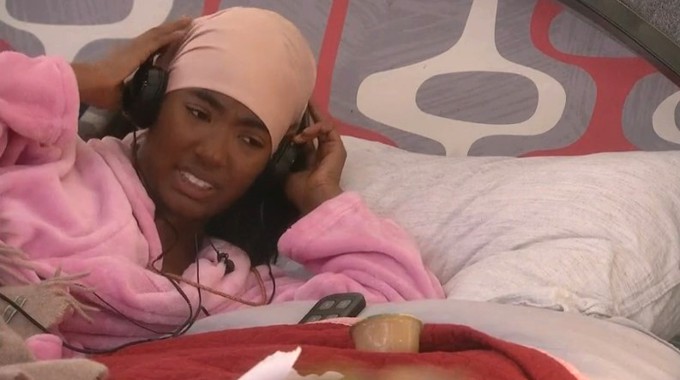 There’s little game left to play on Big Brother 24, but the HGs are still finding drama to fill their remaining days in the house. Sunday had its share of that drama as Taylor and Monte had a few moments that built up and ended in a rough discussion late into the night with Monte’s ego bruised and Taylor handing out the apologies.

12:20 PM BBT – Monte and Turner have been outside on the balcony. Brittany comes to join them. They discuss why the Veto meeting hasn’t happened yet. (It will be live on Thurs night.) Brittany jokes they’re giving her more time to charm them.

12:40 PM BBT – Monte tells Taylor he believes Turner, that he voted to keep Taylor, and then it must have been Brittany that voted against Taylor. Monte says he doesn’t trust Brittany. Taylor is trying to convince Monte to keep Brittany, but it’s not working. Monte suggests Brittany could make a compelling argument about her choices during the season.

1:00 PM BBT – Monte tells Taylor that Brittany still hasn’t tried to talk to him about his upcoming decision.

1:55 PM BBT – The “Headphones Incident.” Taylor is laying on the bed next to Monte who has the headphones on with her music. He starts snoring. Taylor seems annoyed and pulls the headphones off Monte while waking him up. Brittany and Turner are both there on separate couches.

2:40 PM BBT – Monte talking with Turner in the kitchen. Monte is upset about Taylor pulling headphones off him while he was sleeping in the HOH room. He says he doesn’t have patience for that. Turner asks if something is going on between them. Monte admits he is having a physical relationship with Taylor. Monte says after that sort of behavior he doesn’t see him being with Taylor for the long run.

2:50 PM BBT – Monte says he spoke with the “Doc” (possiblye the therapist) about this relationship and how to handle it outside the house. Turner thinks with them being far apart it won’t be an issue to go their own ways.

3:00 PM BBT – Turner and Monte are surprised by the Kyle and Alyssa situation. They hope she sees that’s not a good option for her.

3:15 PM BBT – Brittany has been camtalking awhile. She’s going over the importance she holds on trust.

3:45 PM BBT – Monte, Taylor, and Turner discuss how well Michael would have done in the comps they’ve faced since he left.

3:55 PM BBT – Monte says he’s worried about the third comp being mental and if they keep Brittany around for that.

4:30 PM BBT – Turner is wandering the backyard in silence.

5:05 PM BBT – Brittany asks Monte if they can talk later. (She wants to do her graphs speech.) He goes for a workout and they plan to chat later.

5:50 PM BBT – Taylor comments to herself and wonders how to get Monte to vote out Turner.

7:20 PM BBT – Monte mentions to Turner that he’s willing to humor Brittany’s pitch because she’s been trying to talk to him.

7:35 PM BBT – Brittany talks with Taylor about still trying to convince Monte to bring her over Turner. Brittany worries that using her M&M graphs might be pushing too hard. Taylor says she doesn’t mind going too hard. Brittany asks if Turner has been pitching as well, but Taylor says no.

8:15 PM BBT – Monte lets Turner know that he’s removed all his belongings from the HOH shower. He says he doesn’t want to lead the situation on.

8:40 PM BBT – Second night of tye-die is on in the backyard with Monte and Turner.

9:35 PM BBT – Taylor, alone in the HOH room, comments to herself that she may be getting played. Taylor is talking about her F2 options with either Monte or Turner. She’s counting votes and worries she won’t beat Turner.

9:50 PM BBT – Monte briefly spoke with Taylor in the kitchen about her getting called to the DR. Monte reports back to Turner that he thinks Taylor was lying about that and is instead conspiring with Brittany on how to get him to keep her over Turner.

10:00 PM BBT – Taylor is done with her questions and invites Brittany up. Taylor says the questions she got from Twitter made her suspicious.

10:15 PM BBT – Brittany is going over the comps records to give Taylor more details to share with Monte. She notes that Turner has more comp wins over Monte but her math says he has a 90% chance of beating Brittany in a comp.

10:45 PM BBT – Upstairs Taylor says to herself with regret that she should have won this Veto.

12:15 AM BBT – HGs discussing how they can support each other after the show to pursue what they want to be doing.

12:30 AM BBT – Taylor and Monte briefly chat inside. He asks if she should come upstairs to see her tonight. She tells him to finish off the wine.

1:45 AM BBT – Monte is heading upstairs to see Taylor. Brittany is asleep. Turner is in the DR.

2:05 AM BBT – Monte and Taylor are talking about his concerns regarding what happened earlier when she said something about his goddaughter in a while. Taylor says she didn’t mean that negatively like he took it. Monte says he doesn’t deserve to be spoken to like she did. Taylor is apologetic.

2:15 AM BBT – Taylor continues to apologize and says she would never intentionally hurt someone like he feels he was. She didn’t want to disrespect him.

2:20 AM BBT – Taylor worries that her game is being defined by the men within it.

2:30 AM BBT – Monte tells Taylor it seems that she grows colder and more condescending. when she gets in power.

2:40 AM BBT – Monte has continued to tell Taylor all that he feels is wrong with her and her behavior. Taylor says that at her core she tries very hard not to hurt others because she herself is very sensitive.

3:00 AM BBT – Taylor says she was worried Monte was with her because of the game. Monte understands based on the timing.

3:05 AM BBT – Monte says he wants to wait and get to know her better as friends. Taylor agrees they need to chill things.

3:20 AM BBT – The conversation continues. They discuss boundaries and what they might still do and where they draw the line.

3:25 AM BBT – Monte left. Taylor camtalks, “we’re back to Taylor is an insensitive bitch narrative.”

3:30 AM BBT – Taylor comments that there are just nine more days. (They don’t know the finale is on Sunday.)

Whatever was going on today with Monte seemed to kick off with the headphones incident and then was piled on by the goddaughter comment. After his talk with Turner, Monte seemed ready to cut and run from the Taylor showmance. It’ll be an interesting next few days, but I don’t see anything on the game front changing with Monte’s decision at F4. It could change his F2 plans though.