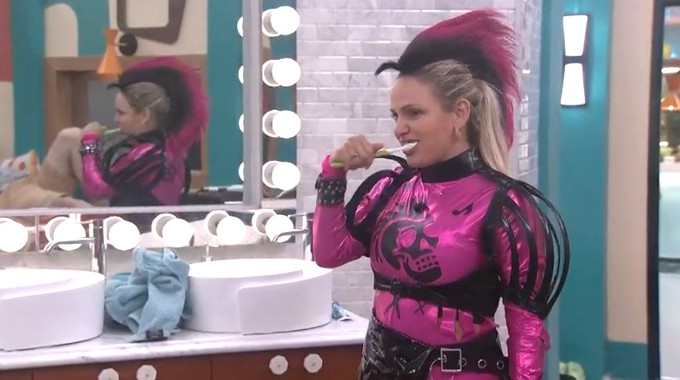 Veto Day presented some very interesting and odd strategies for the Big Brother 24 Houseguests. With the medallion settled the Leftovers started on their plan for the week’s target and that target continues to spin as the group can’t quite decide who would be best to go.

Joseph has been pitching that he would be an ideal renom to sit against Indy, but is that just so he doesn’t have to vote her out himself and risk her Jury vote? Then there’s the idea to keep noms as they are, simpler, and still vote out Indy. Or maybe Alyssa goes up and out. Choices, choices.

8:30 AM BBT – Jasmine asks Joseph if she’s unattractive in the mornings. He says she looks the same.

9:40 AM BBT – Feeds are back. Alyssa, Jasmine, and Kyle were picked to play. Taylor had HG Choice and picked Alyssa.

9:50 AM BBT – Some of the LOs discussing they want Indy out. Monte questions if Taylor wants Terrance out for personal or strategic reasons.

9:55 AM BBT – Joseph said it would help hide Taylor’s game if she renoms him this week. Monte says Indy would revenge-nom Taylor if she stays.

10:00 AM BBT – Taylor and Alyssa promising Indy that they’ll save her and think Jasmine would too.

10:10 AM BBT – Turner pitches an idea to Kyle and Michael: BD Jasmine. They agree it’d be good and split up the Terrance connection to Indy & Alyssa.

10:50 AM BBT – Jasmine talking with Taylor about the plans. Taylor says she’s good with Indy being saved.

10:50 AM BBT – Joseph continues to lie to Terrance that Taylor’s plan is to BD Monte.

11:05 AM BBT – Jasmine asking Indy to please not give her punishments in the comp because this is her birthday week.

11:10 AM BBT – Jasmine asking Terrance not to give her punishments because this is her birthday week.

11:20 AM BBT – Indy, Jasmine, and Alyssa reaffirm their allegiance to one another. They mention that Taylor asked them to save Indy with the Veto if they won it.

11:20 AM BBT – Kyle says he might not use the Veto if he wins it. Michael tells him he doesn’t have to use it. Turner agrees.

11:25 AM BBT – Jasmine telling Alyssa, Indy, and Joseph not to put her in a punishment outfit for her birthday week.

11:45 AM BBT – Michael tells Indy that Terrance is nervous about being on the Block next to her.

11:50 AM BBT – Taylor and Joseph discuss that if Terrance comes down and she renoms Taylor it doesn’t look like she’s betraying the other women.

11:50 AM BBT – Brittany tells Michael it’d be good to keep Jasmine because no one likes her and she can’t win anything. Michael says Turner wants her out this week. Brittany says Taylor won’t do it.

11:55 AM BBT – Taylor says she will save Terrance if she wins Veto.

12:15 PM BBT – Michael and Brittany looking at F3 scenarios where they can make sure to beat the third leg they bring along.

12:25 PM BBT – Kyle wants Jasmine to end up with a punishment because she’s trying to avoid winning the Veto while her closest ally is on the Block.

12:30 PM BBT – LOs meet and discuss winning the Veto to save Terrance. Feeds cut for the Veto competition.

3:50 PM BBT – HGs are excitedly discussing who won what and the punishments others are receiving. Joseph and Taylor will be chained together for 48 hours.

4:00 PM BBT – Michael complains to Brittany how Jasmine is using her birthday to get out of everything. He points out it’s not even her birthday.

4:05 PM BBT – Joseph and Taylor discussing it might not make sense for her to renom him if they’re being chained together.

4:05 PM BBT – Terrance talking with Kyle and is worried that the Veto isn’t being used after all. Terrance says Taylor had told him a bigger target was going up.

4:10 PM BBT – Kyle tells Terrance he only told Indy he was using the Veto on her so she’d leave him alone for the next few days.

4:35 PM BBT – Taylor checks in on Terrance. He says he’s not doing well. She says but he’ll still be here.

4:55 PM BBT – Indy wonders to Michael if Kyle will really save her. Michael says he doesn’t have a reason to doubt Kyle’s promise to her.

5:10 PM BBT – Joseph agreeing the plan to renom he doesn’t make sense with Taylor having picked him to be tethered with for two days. It will be too obvious he’s a pawn.

5:20 PM BBT – Jasmine had questioned Kyle why he took the Veto. He told her he was worried he was the renom plan. Jasmine tells Indy this and says she’s sure Kyle will save Indy.

5:45 PM BBT – Taylor, Joseph, and Turner discussing possible options. They’re still contemplating saving Terrance and renom’ing Joseph then Indy getting voted out. Joseph says Taylor could claim she thinks Indy and Joseph are working together. They know Indy is expecting Kyle to save her.

6:00 PM BBT – Terrance tells Brittany he’s confident he has the votes to stay and doesn’t want to be nominated again. He thinks it’s time for some of the other HGs to be nominated.

6:05 PM BBT – Kyle joins HOH group. He asks if the plan is still to renom Joseph after saving Terrance. They say it is. He suggests maybe they don’t have to do that and he doesn’t use the Veto.

7:15 PM BBT – Talk in the HOH room has shifted to considering Alyssa as the target instead of Indy. They discuss how Alyssa was upset at Taylor winning HOH and Kyle hugging Taylor after. Then also discuss how Alyssa took the trip from Taylor (Jasmine later took it from Alyssa) after Taylor had promised Alyssa safety. Taylor thinks Alyssa took advantage of that safety to try for prizes instead of the Veto..

7:40 PM BBT – Taylor considers she could end the renom speech with “Festie Besties no more” and put Alyssa up with Indy.

8:30 PM BBT – Brittany and Taylor agree the other women probably aren’t voting for either of them over the guys in F2.

8:35 PM BBT – Taylor worries she’s making a bad move against women, but says the other women have treated her so poorly. Brittany doesn’t think Taylor would be in the wrong.

9:15 PM BBT – HGs discuss that it seems like Jasmine hurt her ankle forever ago. They wonder about her recovery.

9:55 PM BBT – Indy camtalks about the Veto comp and how Kyle is going to save her.

10:00 PM BBT – Brittany and Michael discuss that it would be best to get out Alyssa this week. She thinks that would separate the remaining women from Kyle. Brittany worries if Kyle has a F3 with Monte and Joseph. Michael doesn’t think Kyle is the most loyal of players.

10:55 PM BBT – Alyssa worries to Kyle, why is Monte is relaxed. She wonders if that means Taylor is actually planning to renom someone else.

11:00 PM BBT – Michael and Brittany try to decide who they should take to F3. They want someone outside the LOs because the LO members are strong.

11:30 PM BBT – Kyle stopped hanging out with Alyssa and came back to catch up with Brittany and Michael. He’s learning Alyssa could be the new target and he is pushing back. Kyle says Alyssa is not a threat to either of their games’.

11:40 PM BBT – Kyle says he might not want to use the Veto if he knows Alyssa is going up as the renom.

11:45 PM BBT – Kyle warns Michael and Brittany that Joseph has continued to build his relationships with the women and will do well for their votes.

12:00 AM BBT – Brittany and Kyle tell Michael he could be in trouble later considering the target he’s made for himself with all those wins. Michael considers them to have been critical wins that he couldn’t throw (not true on all of them).

12:00 AM BBT – Michael mentions Joseph said he does legal work.

12:35 AM BBT – Brittany warns Kyle that when he’s off with Alyssa he’s neglecting his game. Kyle says he knows it’s hurting his game and he thought she was going to be evicted the other week but instead now he’s deeper into the showmance.

12:55 AM BBT – Monte discusses how he’s working hard to be the best representation he can for people like him. He wants to help people see him as just a cool dude and others like him can be seen that way too.

1:35 AM BBT – HGs debating how to best survive a zombie apocalypse.

2:15 AM BBT – Few HGs still up getting a snack as others have headed off to bed.

It’s tough to see what will happen next, but Indy going out the door in her costume doesn’t seem too farfetched. If Kyle decides to lockdown the noms by declining to use the Veto then how will his alliance take that move to protect Alyssa? Monday should be interesting with the Veto meeting!