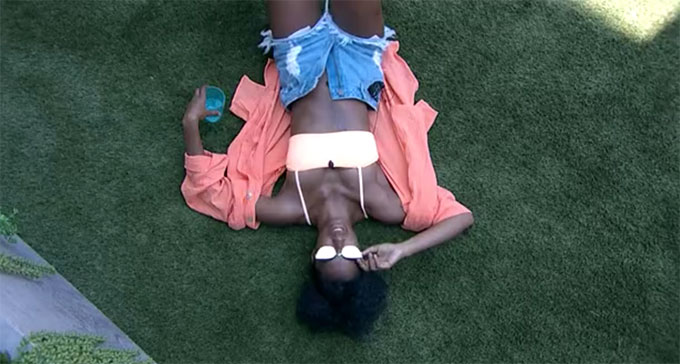 It was a really quiet and mild Sunday in the Big Brother 24 house as the houseguest just enjoyed the sunshine, and kind of took the day off, as suggested by Pooch, who still has no idea he has been the target for this week’s eviction.

By the end of the night, alcohol arrived and several HGs had a bit too much that left a few romantic interests revealed.

10:58 AM BBT – Taylor tells Nicole she’s trying to remain calm and not freak out over the likelihood she will remain on the block next to Pooch.

11:08 PM BBT – Jasmine seems to be second-guessing the plan to get Pooch out this week. Nicole tells her not to second guess herself and just go with the plan.

11:10 AM BBT – Pooch is worried about how they’re looking to the outside world. Taylor tells him she doesn’t think he’s done anything that will make him look bad on social media.

11:15 AM BBT – Joseph and Alyssa discuss whether or not they’d want to win the next HOH. Alyssa says it sounds like too many responsibilities.

11:25 AM BBT – Most HGs are outside in the backyard enjoying the sunshine and chit-chatting.

11:51 AM BBT – Taylor is sitting by herself on the backyard balcony.

12:30 PM BBT – HGs still hanging out outside. Some of them have decided to get in the pool.

12:48 PM BBT – Daniel and Nicole have an emotional conversation in the have-not room. It’s personal stuff and not game related.

1:05 PM BBT – Pooch tells everyone Sunday should be a BB chill day.

3:27 PM BBT – Pooch asks Turner if he’s heard anything about the game today. Turner says no, no one is talking game.

4:30 PM BBT – Everyone is still just enjoying the day. No one is talking game.

7:28 PM BBT – Jasmine tells Pooch and Turner she doesn’t think Michael is going to use the veto and make her get more blood on her hands.

9:30 PM BBT – Michael and Brittany discuss wanting to go far together in the game. They also agree that Turner needs to go next after Pooch.

9:43 PM BBT – Kyle asks Alyssa what they should do about people starting to suspect they’re in a showmance. Alyssa tells him people think he’s in a showmance with Taylor. He says he had no idea.

9:45 PM BBT – The talk between Kyle and Alyssa turns to the vote. She tells Kyle that she has to vote Pooch out so she doesn’t upset the girls. She tells him they discussed who they could put up if Taylor comes down, but she thinks the nominees will stay the same.

10:35 PM BBT – Jasmine discusses what to do about Turner with Daniel and Michael.

11:30 PM BBT – Pooch jokes around that Julie is going to blindside him with the vote.

11:55 PM BBT – Indy suggests they let Taylor win the next HOH and then they can send her out the week after that.

12:00 AM BBT – Terrance tells Pooch he should be okay this week.

12:10 AM BBT – Taylor goes upstairs to the HOH room. Jasmine wants to know Taylor’s strategy if they’re saving her this week. Taylor says she was going to target a girl, but that’s changed. Joseph arrives and breaks up the talk.

12:15 AM BBT – HGs celebrating Indy’s one-year anniversary of being a US citizen.

12:45 AM BBT – Indy explained how she worked so hard when she arrived in the US with taking classes and working.

1:45 AM BBT – Taylor and Alyssa are camtalking. Alyssa isn’t interested in Daniel, but she does think Kyle is cute.

2:00 AM BBT – Taylor explains to the other women that her goal had been to get in with the guys and bring back info to the women. She hopes to prove herself. Taylor says for the guys, she would want Terrance, Daniel, Michael, and Joseph to make it to Jury and then all women at the end.

2:05 AM BBT – Alyssa mentions to Kyle the women want Taylor to win HOH next week so she can go after the guys for them. She asks him if he’ll keep her safe from the guys.

2:15 AM BBT – Taylor expresses interest in Daniel and says she wants to kiss him.

2:30 AM BBT – Taylor regrets drinking in the house and says not again. She encourages Alyssa to go make out with Kyle and mentions Alyssa is on birth control.

3:00 AM BBT – Taylor chats with Michael about Daniel and hints at being interested.

3:15 AM BBT – Taylor has gone to check in on Daniel who is taking a shower in the downstairs bathroom.

3:25 AM BBT – Taylor is getting frustrated about Daniel and just wanted to make out.

3:35 AM BBT – Nicole and Daniel discuss using Taylor to help them get out a guy then they’ll get her out. Daniel warns Nicole that Brittany is probably running info back so be careful what you tell her.

4:00 AM BBT – Nicole tells Daniel they have to fight hard for HOH because their plans don’t work if either of them or Taylor don’t win it.

So Taylor is crushing on Daniel and Alyssa has her eyes on Kyle. I’m sure CBS will work that hard to try and make happen, but I’ll be surprised after Daniel’s attitude toward Taylor. Either way, the house continues to seem to want to try and keep Taylor around a little while longer and perhaps she can extend that if she keeps working her way into the groups.