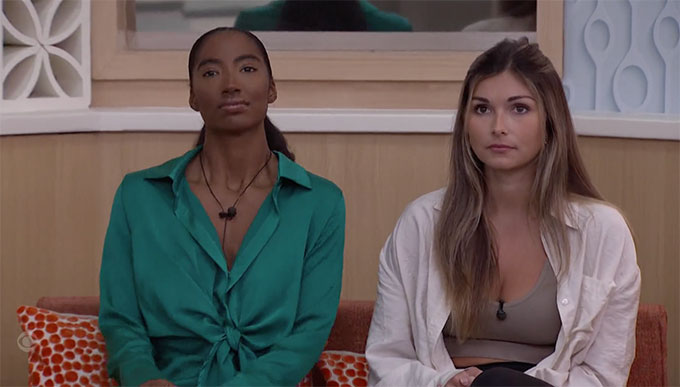 Brittany and Alyssa have been working overtime to try to flip the vote to send Taylor to the Big Brother 24 jury this week, but it’s starting to look like that’s all just going to backfire on Brittany. So despite some minor suspense, we have a pretty clear idea of who is getting evicted tonight.

As you saw Wednesday night, Brittany won the Power of Veto and took herself off the block. Monte, not wanting to risk Turner, put Taylor on the block, with Alyssa remaining as his intended target. This should have pleased Brittany, as Taylor is virtually the only one still interested in working with her, but instead she got with Alyssa and hatched a very thin plan to flip the vote and send Taylor off to jury.

Brittany worked a little too hard trying to convince Turner to give Alyssa a sympathy vote though. She told him she was 10000000 percent voting to keep Taylor, so it would totes not be even a big deal AT ALL if he, you know, wanted to throw his girl Alyssa a little sympathy vote. Turner saw through it, as did Monte and Taylor, when Turner took all of this information to them. And sadly for Taylor, she now has to deal with the one person she thought she could depend on trying to get her evicted this week. Which is interesting considering how Brittany reacted to Michael throwing her under the bust last week.

So Turner last night promised Taylor he was not voting against her, so either Brittany will follow along with Turner’s vote or look really foolish trying to split the vote tonight. I hope the latter happens for dramatic effect, but I imagine Brittany will realize today that Turner isn’t giving Alyssa a sympathy vote, and Brittany will want to pretend to Taylor that everyone is fine, and she never wavered.

In case you haven’t realized, our official eviction prediction this week is Alyssa. And it looks like our readers agree. In our weekly eviction poll, this week 69 percent of you say it will be Alyssa. That’s a much lower number than usual, though, so that says a lot about how Turner and Brittany have shown their lack of loyalty this season.

Do you think Alyssa or Taylor will be evicted from the Big Brother 24 house tonight? Let us know in our comment section, and be sure to join us back here tonight for our live coverage and find out who it will be with us!