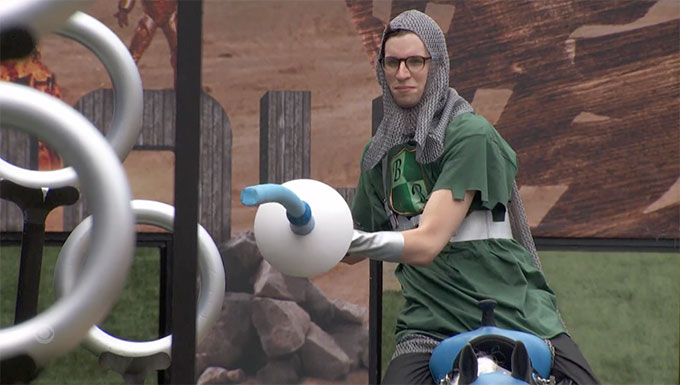 Writer’s note: Wednesday night’s episode of Big Brother 24 might have been a bit confusing if you don’t watch the Big Brother Live Feeds.

As you may have seen or will read in the following recap, much of the episode focuses on Paloma’s one-sided vendetta against Taylor and how Taylor found herself on the block at this week’s veto meeting. What we saw in the episode was Taylor walking in on Paloma and some of the other women talking about the men, and fearing they’re going to team up and make an alliance. They shared their concern with Taylor, but she didn’t think much of it.

Later, Taylor lets Monte know that Paloma and the other girls are concerned the men might be teaming up. That then turns into a game of telephone where Monte tells Paloma that Taylor said Paloma was planning on nominating two of the guys. First of all, Monte didn’t even tell the story correctly. And secondly, Paloma begins telling a series of lies that leads to most of the house joining in on her Taylor vendetta.

If you noticed, there was very little they showed Taylor saying or doing to get so many people in the house angry at her, because there’s nothing to show. Taylor has done nothing wrong. The one thing we did see was her telling Monte an actual true story — to protect him, something she saw happen in Big Brother 23 when the Cookout alliance looked out for each other.

Wednesday night’s episode of Big Brother 24 picked up right after Daniel nominated Michael and Terrance for eviction. Daniel reminds us that Michael is the target because he’s a superfan, like himself.

Right after the nomination ceremony, Michael goes to talk to Daniel and lets him know that even though he’s nominated, he’s not going to play the game any differently and make Daniel his target. But Michael lets us know he’s just saying and actually has revenge on his mind.

Daniel then lets Terrance know that he is not the target and never would be. He doesn’t use the word “pawn,” but that seems to be the message he’s trying to send Terrance.

Meanwhile, Taylor is doing a fashion show, and the other girls are encouraging her. So she models the looks she brought to wear to finale night (like every houseguest does, keep in mind). 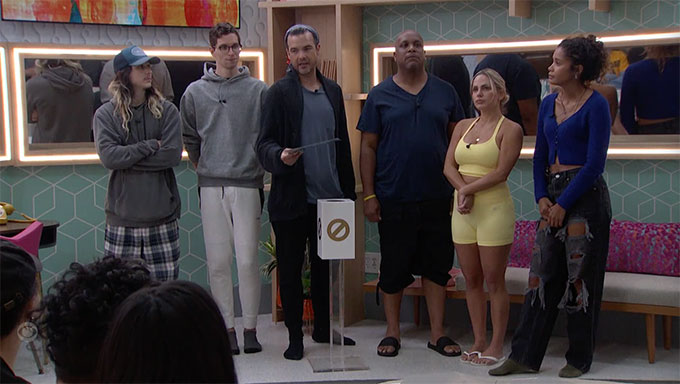 Speaking of which, it’s time to pick players for the veto competition. Joining Daniel, Michael and Terrance in the competition will be Indy, Turner and Ameerah.

Michael gets in a solo pep talk before the veto competition and even conjures Janelle. He asks WWJD (What Would Janelle Do) and he says she’d win the veto and celebrate afterwards. We even get a quick ghostly flash of Big Brother 7 Janelle from when she won the first veto of that season.

So let’s get to the competition and see if he can pull it off like Janelle.

For the first veto competition the players will go head-to-head. Two by two, the players will compete until there’s only one player left. In a Big Brother version of a joust, they have to collect rings on a dangly, wobbly lance while riding a fake horse.

Turner and Indy are up first. With a score of 5-4, Indy wins the first bout. Turner is out.

Ameerah and Terrance are up next. With a score of 7-2, Ameerah wins the second bout. Terrance is out.

Daniel and Michael are up next. With a score of 9-7, Michael wins this round. Daniel is out (after a lot of trash talking in the DR about him planning on beating Michael).

Indy and Ameerah are up in the next set of rounds. Ameerah wins with a score of 12-6. Indy is out.

Michael and Ameerah are up in the final bout. And after several rounds of a tie, Michael pulls out the win and dedicates it to Janelle!

And Daniel is very unhappy. He lost to the other superfan and now has to come up with a replacement nominee.

Elsewhere, the Girls Girls alliance is getting nervous abut the guys, and they let Taylor know. Taylor decides to tell Monte that Paloma is worried about the guys. And then Monte tells Paloma, but doesn’t quite get the story told by Taylor right. And Paloma’s one-sided vendetta is fueled even further. So she denies having said anything of the sort and starts pushing for Taylor to be the replacement nominee and the new target. 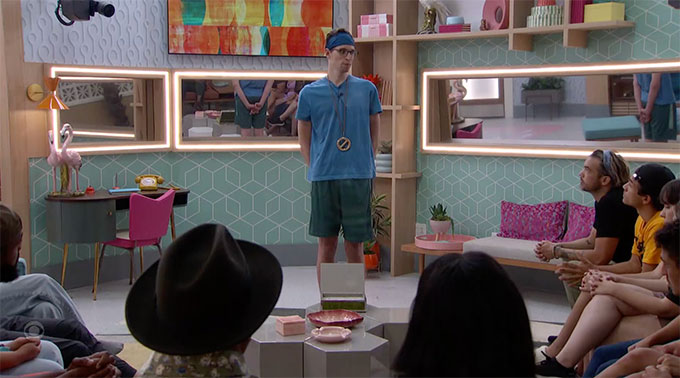 At the veto meeting Michael uses the veto on himself and Daniel names Taylor as the replacement nominee after the house ganged up on her over something we know she didn’t even do.