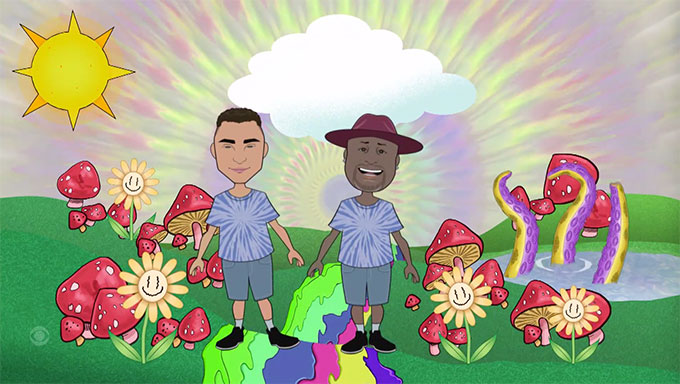 I’m not sure what was more embarrassing during this episode of Big Brother 24 — the silly veto competition that had the players taking fake acid trips or the stupid game move Daniel made that will ensure his best friend gets backdoored this week.

Wednesday night’s picks up right after Monte nominated Indy and Alyssa for eviction. Monte lets us know that he nominated them because they’re the only pair that doesn’t include a member of the Leftovers alliance. But he still has his sights on Nicole, so if things line up and Taylor is OK going up yet again, Nicole could be in trouble.

Nicole is happy she’s not on the block, but she doesn’t feel safe. She says she can only trust Daniel and wouldn’t be shocked if she was the backdoor plan this week.

Meanwhile, Michael, Brittany and Taylor make a sub-alliance. Michael tells us that he wants to take Taylor and Brittany to the end with him.

Daniel decides to check in with Monte about what he’s thinking this week. Monte keeps up the Taylor as a target charade. But Daniel is a little suspicious after Ameerah’s blindside. So he says he can’t let that happen to Nicole this week.

Elsewhere, Taylor, Michael and Kyle talk about how great it would be if Daniel won the veto and did use it and he was the cause of his best friend going home. Taylor says that would be some sweet revenge.

Daniel tells Nicole that he really wants to win veto and not use it. He says his priority is to protect his Final 2.

So it will once again all come down to the veto. So who is going to be playing this week? It’s time for the veto draw and find out. Joining Monte, Joseph, Terrance, Indy and Alyssa are actually Daniel and Kyle.

And it turns out that Daniel and Nicole aren’t the only ones who would like nominees to stay the same. Brittany knows that she and Michael are the most vulnerable of The Leftovers since they don’t have a non-member with them. So if noms stay the same, they can send Alyssa home and get Indy to join them as a shield. And since Taylor is all in with the two of them, she says she can hold off on her Nicole revenge another week.

But before anything can or can’t happen, the veto has to be played. So let’s get to it and find out what happens.

For this week’s Power of Veto competition, one (or two players) from each team will have to pretend they’re tripping on psychedelic slop, watch a weird cartoon video of themselves, and then relay that info back to the other player who will then have to answer a series of questions based on what they’ve been told about the trip. The team who gets the most answers right wins the power of veto. 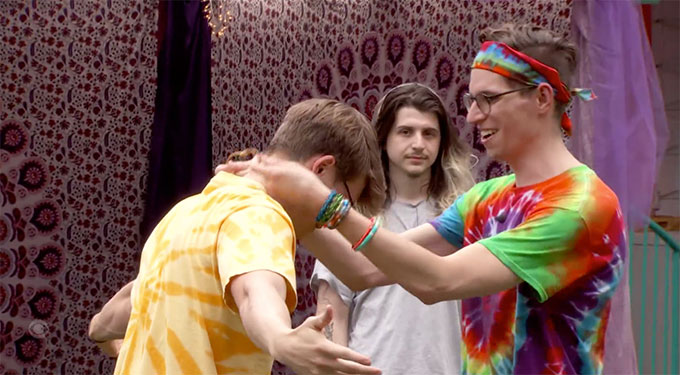 That means Kyle and Daniel win the Power of Veto.

And Daniel realizes that Kyle is going to want to use the veto on Alyssa. And it apparently only takes one Bestie to change the nominees.

And speaking of that, Michael decides to mention to the rest of the alliance that he and Brittany don’t have a shield, so leaving nominations the same will keep their alliance stronger. Monte agrees that if Indy would join Michael and Brittany then next week they would be 100 percent protected. So the Leftovers are leaning toward not using the veto. But how can they convince Kyle not to use it?

Kyle joins the others, and they give him the pitch. He gets the plan, but says it would be hard for him to not save Alyssa on a moral basis. They really drive it home to Kyle that this is the way to really protect the alliance.

So Monte goes to Daniel and Nicole to make sure Daniel hasn’t decided to use the Power of Veto. Monte tells them that he is more sure of how the votes will play out if the nominees stay the same. If he puts Taylor and Nicole on the block, he isn’t sure where the votes would fall and Nicole could go home. He says that’s not what he wants.

Daniel and Nicole think Monte realizes he doesn’t have the votes to get Nicole out this week, so he doesn’t want the veto used so he can save Taylor. That makes them think now is their chance to get Taylor out so Nicole is fine going on the block again if Daniel uses the veto.

Daniel goes to Kyle and says it’s laughable how Monte is trying to keep them from using the veto now and he knows exactly why. So he tells Kyle he’s going to use the veto even if Kyle doesn’t. 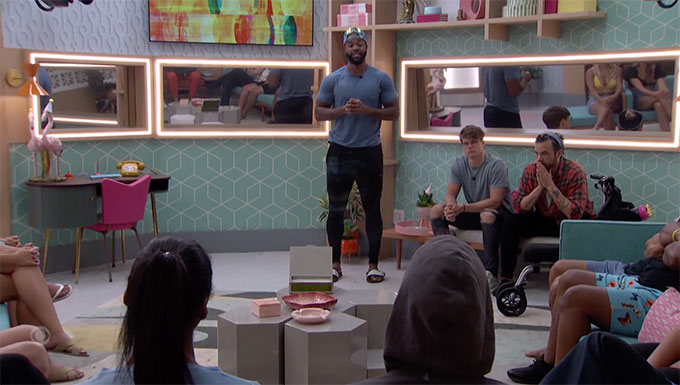 Kyle lets us know that Daniel is not only going to help him save Alyssa, but he’s going to make sure Daniel’s own best friend in the game is getting backdoor this week. That might be one of the dumbest moves ever, Kyle adds.

At the veto meeting, Daniel decides to use the Power of Veto. Indy and Alyssa come down, and Nicole and Taylor go up.