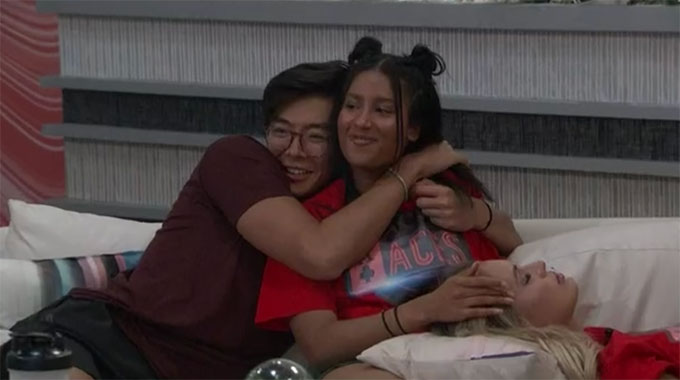 If Big Brother 23 is likely to be known as anything, it’s the season with all the alliances. From the failed Slaughterhouse alliance to the thriving Cookout, it seems like everyone has worked with everyone at some point or another. Except Britini. For some reason she thinks her little team of Jokers is enough.

We’re now well into Week 4, so let’s take a look at the current alliances and deals.

As I already mentioned, The Cookout alliance is still going strong, and as we’ve seen this week with how most of the members worked to protect Hannah, it’s a very solid alliance. Not as solid, but still functioning to protect its members is the Royal Flush. That consists of Alyssa, Christian, Xavier, Sarah Beth, Tiffany, Claire and Derek X (The Kings, Queens and an “Ace up the sleeve”).

The Royal Flush was pretty close to folding this week had the Kings not won Head of Household. But since they did, Tiffany, Claire and Derek X were all in.

Tiffany, Claire and DX are definitely more loyal to The Detectives, which includes the three of them and Kyland in a final 4 deal. Within that group, Tiffany has a final 2 with Kyland, and an unspoken one with Claire. Tiffany has said she can’t honor that over hers with Kyland, but she assumes Claire thinks they have a Final 2 thing going.

Other duos in the game are obviously Christian and Alyssa and Derek X and Hannah have a Final 2 deal going. Kyland and Sarah Beth remain close, but SB’s recent push to get Hannah out is impacting her game in the worst way, and Kyland knows he might lose her soon. And then there’s the odd Final 2 deal with Derek F and Christian. I don’t know what that even is at this point, especially since DF was just talking recently about going after Christian and Alyssa.

So what happened to the woman’s alliance? Well like always, it just kind of faded away. There’s still the thing with Claire, Tiffany and Sarah Beth, but now Sarah is a target for the other two. It looks like we may never get that woman’s alliance again.

The newest alliance is one of opportunity between Claire, Tiffany, Christian and Alyssa. Most of the house want Alyssa and Christian out, but for Tiffany and Claire, it’s beneficial for them to be in a group with those two as Christian has proven he can win a lot of competitions, and if he isn’t going out anytime soon, might as well stick close by him so he can protect them. But here’s to hoping everyone sees what a threat Christian is and goes after him soon.

Thanks as always goes out to @89razorskate20 on Twitter for keeping all of these alliances and deals in order. Check out their handy graphic below.