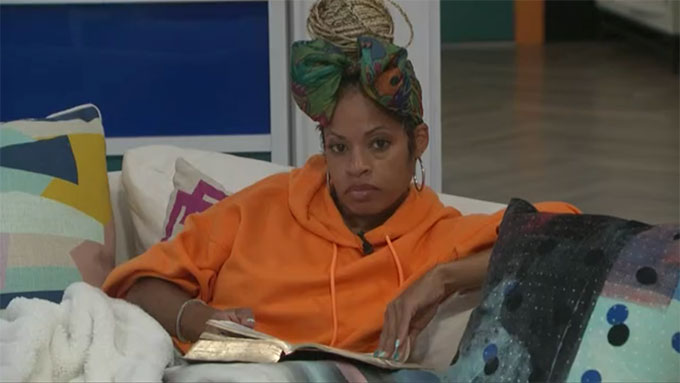 After the Power of Veto Ceremony came and went in the Big Brother 23 house, Tiffany accepted her fate, and the men plotted the two evictions after Tiffany’s. They, of course, want the women to all go out in a row, leaving them at final three for a “gentlemen’s fight.”

3:10 PM BBT – Xavier tells Azah that Kyland has set himself up for Final 4, so that means people will be coming for him (X) the next two rounds.

3:30 PM BBT – Derek tells Xavier that “Tiffany is trying it” because she told Derek he loses sitting next to Xavier. He tells Derek that Tiffany told him Hannah was going to take him out next week. Derek says they can’t keep Tiffany. Xavier says they aren’t, but they have to make sure Hannah goes next week. Xavier says Hannah might be more of a competition threat, but Tiffany has to go this week.

3:31 PM BBT -Xavier says Tiffany is kind of throwing Hannah under the bus without realizing it.

3:32 PM BBT – Xavier asks Derek who he should put up with Hannah if he wins HOH. Derek says Azah. Xavier asks how he thinks Azah would feel about that. Derek says she thinks they have a final 3 so she will have to suck it up.

3:34 PM BBT – Xavier asks if he takes a shot at Hannah or Azah next, what is stopping Kyland for going after him at final 4. Derek says they have a deal though. Xavier says as long as Kyland honors it. Derek says they just have to pray that he can win the final 5 HOH so Xavier can get to final 4. Xavier says if Derek isn’t about to win that HOH he’s going to have to though.

3:35 PM BBT – Xavier says Tiffany goes this week, then Hannah, then Azah. He says when they get to the final 3, they have a friendly gentlemen fight.

3:57 PM BBT – Derek says he told Azah that she can’t take go after Kyland next week if she wins HOH. He says if she wins he’s going to make her put up Hannah and himself. Xavier says they won’t vote Kyland out over Hannah, so he would rather her put up Kyland than Derek.

4:54 PM BBT – Xavier is asking Derek if he loves Kyland. Derek says he has feelings for him.

5:30 PM BBT – Xavier tells Derek they can give Tiffany credit for coming up with the visual representation of the Cookout, but they can also give her credit of blowing up her own game.

5:36 PM BBT – Hannah tells Tiffany if she was up next to anyone else, they could have figured out a way for her to stay.

5:38 PM BBT – Tiffany says she’s more of an old-school player so she didn’t fit because people play too safe and predictable now.

5:45 PM BBT  – The men are still bashing Tiffany. Kyland has joined. They seem to think she shouldn’t be trying to not get evicted this week.

5:49 PM BBT – Hannah and Tiffany go to the kitchen to help out Azah. Tiffany asks what she can do and Azah tells her she can roll out the dough for chicken pot pie.

5:50 PM BBT – Derek says if Hannah wins HOH he’s going to tell her that Azah was trying to send Hannah home so that she targets Azah.

6:11 PM BBT – Derek tells Kyland that he wanted to be the one to send Tiffany home.

6:17 PM BBT – The guys are talking about the backyard closing early. They speculate why. Derek wonders if there will be a special HOH competition on Wednesday.

8:19 PM BBT – Hannah and Kyland are talking in the HOH room. Kyland is going over the odds they have of winning based on who they’re sitting next to. And he keeps rambling on, but Hannah listens as she’s trying to make sure she stays not the target this week.

8:50 PM BBT – DF tells Azah if she gets HOH she needs to put him (DF) up against Hannah. She wants to instead put Kyland up against Hannah, but DF says they have a deal with Kyland to keep him safe, so it needs to be him instead.

9:00 PM BBT – Xavier, Derek, and Azah are playing with the social media camera. Hannah and Kyland are still chatting in the HOH room. Tiffany is no where to be found.

9:35 PM BBT – Tiffany is pitching to Azah to stay. She suggests that Hannah and Kyland probably have a deal together. Tiffany wants to stay to F5 for the money, she says. She tells Azah that Hannah is much smarter than her and she (T) would be easier to beat.

10:45 PM BBT – Hannah, Azah, Xavier, and DF sitting in the kitchen discussing how the Jury will react to learning about the CO and how they were each +1s and disposable to the cause.

11:30 PM BBT – Xavier, Kyland, and DF upstairs in the HOH room having sex talk about it being so long and getting over it.

12:15 AM BBT – Kyland and DF are upstairs studying going over days and events.

1:00 AM BBT – Kyland and Xavier check in and discuss how close they are to the F2. Kyland is very excited.

1:10 AM BBT – Azah works through scenarios with Xavier about keeping Tiffany. She asks if he’s determined for Tiffany to go. Xavier says yes.

1:50 AM BBT – DF and Kyland are still talking in the dark. DF is excited to go home to opportunities.

Tiffany remains sunk. She’s heading out next unless she pulls off a miracle, but with just three votes and DF + Xavier set against her I don’t see how it’s possible. Tiffany could get Azah, but that’s not enough and now with the Veto ceremony settled it’s too late for moving one of the guys out of the voting column. Tiffany is off to Jury on Thursday unless something crazy happens.