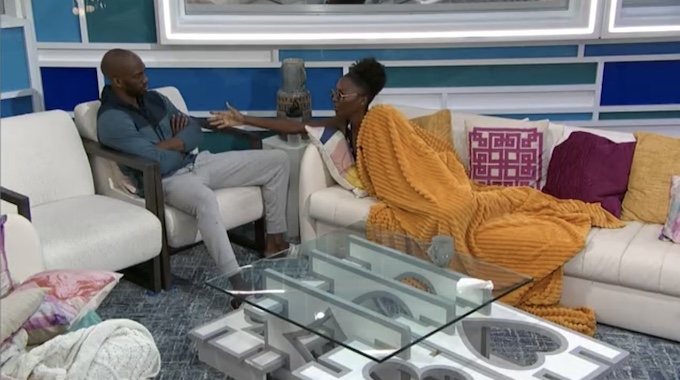 8:40 AM BBT – Tiffany realizes that she doesn’t have a speech for today’s Veto Ceremony. Tiffany tells Xavier that it’s weird because the person she is trying to convince to use the Veto on her, is also the same person that put her up.

9:57 AM BBT – Feeds returned. Veto was not used. Tiffany and Hannah remained on the block.

11:20 AM BBT – Azah tells Derek that right after the Veto Ceremony, Kyland came to her and asked her if she would vote how he wanted her to. She doesn’t understand what made Kyland target Tiffany this week since they seem to have the closest relationship in the Cookout.

11:32 AM BBT – Azah tells Derek that she feels like what Tiffany did and what Kyland did, had the same effect (during the endurance comp). She says that Kyland not dropping when he was supposed to throw it and Tiffany winning when Claire was supposed to be the target.

11:37 AM BBT – Xavier joins the conversation with Azah and Derek. He tells them he thinks that Kyland is targeting Tiffany because he knows that she is the other person in the house that made a selfish move. Therefore if he takes her out, people might be more likely to forget what he did in Week 6 and work with him.

11:55 AM BBT – Derek tells Azah that Kyland is going to go after Xavier next. He adds that they need each other in this game in order to keep a target off them. He says that putting Azah and Derek on the block together is a joke, that’s not helping anyone.

12:17 pM BBT – Hannah, Xavier, and Azah are all talking about who might have lied about their age this season.

12:45 PM BBT – Xavier is camtalking about how they’re almost there, a couple more weeks and it will be finale night. Just have to play the game a little bit longer.

12:55 PM BBT – Hannah and Xavier are rehashing the season in the yacht room while Derek and Kyland are studying in the kitchen.

1:10 PM BBT – Hannah and Xavier are talking about how all the jury members are going to realize they were all in an alliance when Alyssa walks in and tells them that Hannah sent her out.

1:55 PM BBT – Tiffany asks Derek if Azah came to him and said that the two of them (T&A) could work with him and Kyland, would he keep her? Derek says that him and Azah have talked, but he’s stuck because he’s close with Hannah also. Tiffany tells Derek that Azah won’t work with Hannah the way she would work with Tiffany. She adds that Azah doesn’t trust Hannah at all.

2:00 PM BBT – Tiffany tells Derek that Hannah won’t take him because she thinks that everyone in the house will take Derek to the end and she doesn’t want to see that. Tiffany adds that if Xavier is sitting next to anyone in the F2, he will win. Derek asks if Xavier wins over him and Tiffany says absolutely. Xavier wins over everyone because he has played a flawless game.

2:06 PM BBT – Kyland lays next to Derek as Tiffany is getting up to use the bathroom. Derek whispers “she wants me to keep her” and Kyland tells him not to and Derek says he isn’t.

2:08 PM BBT – Tiffany leaves the HOH and Derek retells his conversation with Tiffany to Kyland.

2:11 PM BBT – Tiffany goes to campaign to Xavier and he tells Xavier that if she leaves, the next target in the house has to be Xavier. Tiffany says that if she stays, the target stays off him a little longer. She tells him that he has a great chance at winning this game and Hannah feels the same way. She says that where they are different is, she just wants to leave with something (money) and she isn’t expecting to make it to the end, Hannah is.

2:23 PM BBT – Tiffany tells Xavier that if him and Azah kept her, she would owe them her game. She said she would have to because no one else wants her in the game. She says that she is too old to come back here and do this again and she doesn’t want to leave empty handed. Tiffany also tells Xavier that she thinks that Kyland really wanted to go after him this week but knew he couldn’t get him out.

2:26 PM BBT – Xavier tells Tiffany that he has given him a lot to think about and he appreciates her coming to talk to him and not assuming his vote was going to Hannah.

2:30 PM BBT – Xavier tells Tiffany that he was leaning towards keeping Hannah, but his vote isn’t set and he can still be persuaded.

2:41 PM BBT – Azah tells Xavier that before the HOH, she made a deal with Kyland that if he didn’t come after her this week that she wouldn’t go after him next week. He says so her only option for next week is Hannah and Xavier says that he was thinking her too. Says that he would put her up with Kyland.

2:45 PM BBT – Xavier tells Azah that Tiffany told him Hannah would target Xavier if she stays. Azah says that they (T&H) are both in positions to target him and Kyland. Azah and Xavier agree that if Hannah said something like that, the person she would tell that too is Tiffany. Xavier says that if it is true, then he is going to have to put that into consideration.

2:50 PM BBT – Azah tells Xavier that she thinks that Hannah would likely take a shot at Kyland or Xavier next week. She adds that Hannah will definitely go after a guy and the options are limited. She says that the biggest thing for next week is Hannah can not win HOH.

3:08 PM BBT – Xavier tells Azah that it seems like Kyland has him set up pretty good for F4 or F3 which means for the next two weeks, he is going to have people coming after him.

Tiffany is trying to convince Xavier and Derek that Hannah is targeting them for two very different reasons. While Tiffany isn’t wrong, Xavier is having a hard time believing her because of the position that she is in and Derek refuses to go against Kyland this week. While I don’t see the target shifting this week, Tiffany is clearly not going down without a fight.