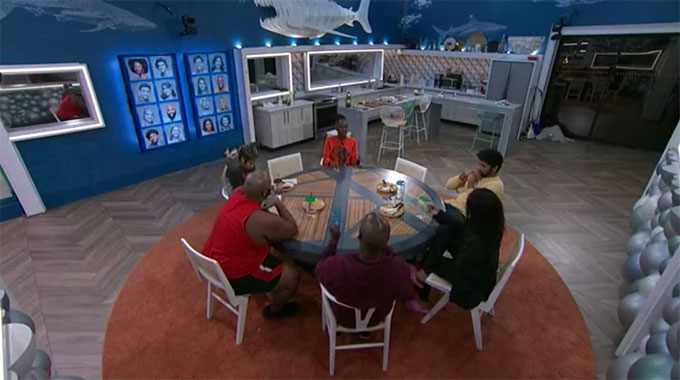 It was nomination day in the Big Brother 23 house, so Kyland was the first Cookout member to strike first. And needless to say, the celebration of completing their mission didn’t last long as Hannah and Tiffany found themselves on the block together, despite Xavier being the obvious biggest threat in the game.

3:10 PM BBT – Tiffany is meeting with Kyland ahead of the nomination ceremony. Tiffany is laying it all out for Kyland about how Xavier can’t be beat and how Derek and Azah are both on Xavier’s side.

5:30 PM BBT – Feeds have returned. Kyland is talking to Hannah in the HOH. He nominated Hannah and Tiffany and it sounds like he has let her know that Tiffany is the target.

5:33 PM BBT – Tiffany tells Azah that men stick together in this game, but women don’t.

5:38 PM BBT – Xavier tells Tiffany he’s sorry that she’s up. She says she’s sure everyone was expecting it, because she knows she was.

5:40 PM BBT – Hannah asks Kyland if the reason she’s up with Tiffany is because she would be most likely to use the veto on Tiffany. Kyland says yes. Hannah asks if that hinders the two of them working together movie forward. She asks him if he wants nothing to do with her. He says, he would say the opposite.

5:53 PM BBT – Kyland says to the cameras that this is tough because he loves Tiffany. He says he feels crappy to do this on her son’s birthday. He says he had been wanting to ride with Tiffany but asks why couldn’t she stop lying to him.

6:00 PM BBT – Derek tells Kyland he did what had to be done and says he’s proud of him.

6:17 PM BBT – Tiffany is annoyed with Xavier and Kyland because she was trying to help Azah with dinner and they came in and started helping. She told them they’re in the way and to go back to conspiring against her.

6:19 PM BBT – Tiffany goes to tell Xavier she didn’t mean to throw him out of the kitchen and asks him to go finish crushing the garlic. She says she just wants to read the Bible.

6:54 PM BBT – Tiffany says to the cameras that she is going to just have to win veto. She says she’s not giving up and if she’s meant to be there past this week then she will. She says she will try her best as she always does. Tiffany says she is happy to have gotten this far and says at this point they are ready to send her home.

7:20 PM BBT – All HGs other than Tiffany are having dinner.

7:45 PM BBT – Tiffany has finally joined the others for dinner.

8:30 PM BBT – Tiffany joking around and singing that she’s on the Block because she “trusted the wrong man.”

9:00 PM BBT – Hannah camtalking that she hopes to be able to take out Xavier and/or Kyland to build her resume.

9:10 PM BBT – Derek lies to Hannah and tells her he thought it’d be him and Xavier going on the Block. He tells her that she should be safe and Tiffany is the target.

9:25 PM BBT – Derek worries what other HGs may have been saying about him in the DR. They promise it hasn’t been anything mean.

10:30 PM BBT – HGs discussing relationships and the differences for them between casual flings and dating.

12:00 AM BBT – Tiffany and Hannah go over the situation. Tiffany knows she’s the target. Hannah hopes Tiffany can win Veto then Azah will go up on the Block.

12:10 AM BBT – Tiffany camtalks that she’s going to fight for Veto and asks for positive thoughts from viewers.

12:25 AM BBT – Hannah camtalks that she can’t have Tiffany win Veto or she’ll be up against Azah and she (H) will go next. She’s worried about getting cut before F4. She’s frustrated because she thought she had a F3 with Kyland and Tiffany. She suspects Kyland probably has a F3 with DF and Xavier instead.

12:35 AM BBT – Azah tells DF she expects Hannah would target Kyland and Xavier next week if she gets HOH.

12:50 AM BBT – Kyland camtalks that he had previously hoped to get to F3 with Tiffany and Xavier. He wanted to go to the end with the best players.

1:00 AM BBT – Kyland thinks he has a good chance at getting to F2 and winning. He hopes the Jury respects his game and that his GB messages have helped. He thinks if he gets to the end against Xavier it will help him achieve his best potential.

Tiffany knows she’s in big danger and the Veto is her way out this week. Veto Comp is coming up on Saturday and it could decide a Tiffany or Hannah eviction. Meanwhile, Kyland appears to be pursuing a dangerous path to F2 with big threats.