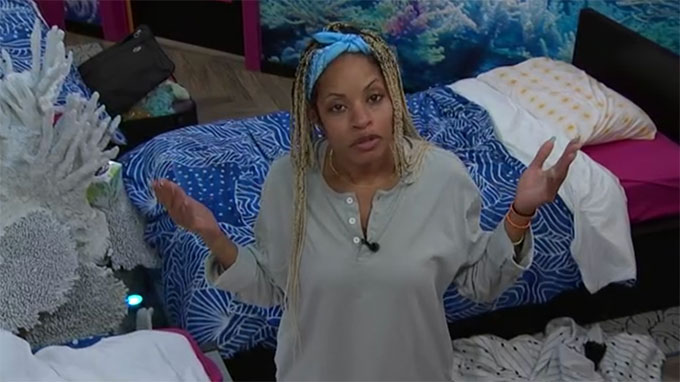 The Big Brother 23 Houseguests made their final trip to the High Rollers’ Room Friday afternoon, and that resulted in Tiffany being dethroned as Head of Household, but the Coin of Destiny winner did not change her nominees, and she gets to play HOH next week, so she’s not too disappointed, other than losing access to her Beyoncé “Lemonade” album. Read on to find out what everyone is thinking after the “anonymous” Coin of Destiny winner made their move.

7:16 PM BBT – Feeds return from the High Rollers’ Room twist. Tiffany is packing up to move out of the HOH room. Tiffany tells Claire I’m willing to take it for you. Hannah says to insinuate that Tiffany won the Coin of Destiny and dethroned herself so Claire can stay under the radar. So Claire won the coin flip and dethroned Tiffany.

7:20 PM BBT – Sarah Beth is upset telling Kyland that someone had the secret opportunity to nominate people and chose to nominate them. So Claire won the coin flip and then kept Tiffany’s nominations.

7:22 PM BBT – SB asks Kyland if he thinks Derek F did this. Kyland says the odds are low that it was him. SB says she doesn’t know if it was Claire. She doesn’t think she would have had enough BB Bucks to play.

7:24 PM BBT – SB tells Kyland that she thinks Xavier will win this season.

7:41 PM BBT – Derek tells Xavier that as soon as he knew Claire had enough money to play he decide there was no point in putting himself at risk to play.

7:47 PM BBT – Tiffany tells Kyland to let everyone think she is the one who won the coin flip. Kyland tells her Sarah Beth doesn’t know who won.

7:55 PM BBT – Tiffany tells Xavier that she told Kyland to say she won the coin toss, but she didn’t. Xavier asks if Claire won. She says yes.

8:00 PM BBT – Hannah tells Xavier about Kyland pulling her aside about being out of the loop on what’s going on this week. Hannah says Kyland said he wants to win the next HOH because he doesn’t like not having all the information. Xavier says Kyland doesn’t know how to be a team player.

8:42 PM BBT – Tiffany talking to the cameras says that she’s not disappointed about being dethroned. She says she can play next week and SB is still on the block. She also thanks America for sending her 100 BB Bucks. She says it wasn’t enough for her to play, but SB couldn’t play either.

9:15 PM BBT – Sarah and Claire wonder how the Veto comp will select players since there are three Noms and no HOH now.

9:45 PM BBT – DF tells Claire he wants to play for Veto and will fight to win it out of fear for his own game.

10:15 PM BBT – Sarah talks with Azah about the anonymous HOH noms being more difficult than when Tiffany did it because she doesn’t get any answers in this situation.

11:15 PM BBT – Sarah has been discussing with DF the upcoming Veto comp. She knows it’ll be hard to beat Kyland or Xavier but she’s going to fight hard. DF says with him in the mix that’ll be one less competitor for her as these don’t tend to go his way.

11:25 PM BBT – Sarah talks with Kyland about the possibility of getting DF’s support so they can send out Xavier instead of either of them if noms stay the same.

11:45 PM BBT – The Cookout alliance has its first official gathering all at once with the six members meeting briefly in the bathroom for an “all hands in” cheer.

12:10 AM BBT – Kyland has been talking with Sarah about visualizing a win in the Veto comp. She goes to get ready for bed.

It was a quiet night after all the chaos of the Coin of Destiny and the renom of the original noms. Now we’ve got to wait and see if Sarah pulls off an upset in the Veto competition. She’ll have some tough challengers to go against but anything is possible.