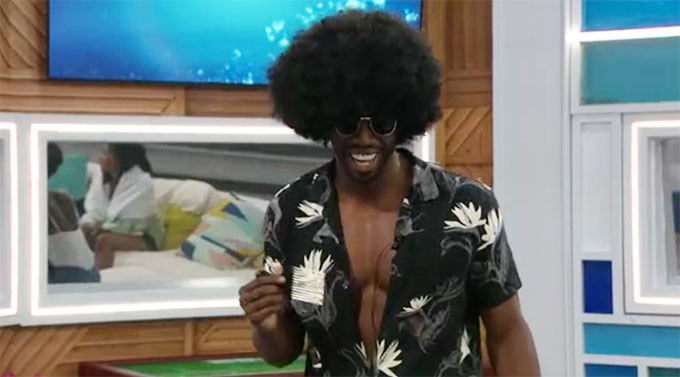 It was another day of meetings in the Big Brother 23 house as Kyland continued to hold court, and one nominee worked overtime to secure votes that are most likely actually not going to be there come Thursday night.

3:10 PM BBT – Britini and Kyland still having their talk. Britini tells him that he has given her way too much credit in terms of deception and lies. She says she’s really bad at it and that there are people in the house who are much better at lying than her.

3:12 PM BBT – Britini tells Kyland that she’s not going to focus on him in her campaign to stay.

3:16 PM BBT – Britini says she hopes that if Kyland remains indifferent on who goes like he told her then she hopes he lets people vote how they want.

3:33 PM BBT – Kyland tells Britini that everyone in the house other than Derek F and Azah thinks she’s one of the HGs who got 100 BB Bucks. She asks if that’s one of the reasons why she is on the block. Kyland says that is one of the factors. Britini says that really upsets her and she told people what she got and no one believes her. She says the amount of bucks she got should not have been a factor in her being on the block.

3:57 PM BBT – Sarah Beth says she’s nervous about next week now that she realizes people see her and Kyland as a duo. Then she mentions them taking a shot at Derek X next week.

4:15 PM BBT – Tiffany and Hannah agree they need to send Kyland out first from The Cookout. They say one of them need to win the Final 6 HOH to make sure a Cookout woman doesn’t go to jury right away.

4:17 PM BBT – Tiffany thinks that she is the last one they will want to keep. She thinks Azah, DF and Kyland will all want her out first.

4:22 PM BBT – Hannah has been saying DX needs to go next week, but now she says she wants him to stick around another couple of weeks to help them get out other people. Tiffany says that DX will win one of the next to HOHs.

4:23 PM BBT – Tiffany tells Hannah if she (T) gets voted out early, then keep Azah and DF around as long as she can because they will be easy to beat at the end.

4:45 PM BBT – Hannah tells DX she’d still rather take a shot at Sarah Beth next week because she doesn’t see Xavier or Kyland coming after her right away.

4:50 PM BBT – DX tells Hannah if she ends up on the block he will play the Roulette Wheel game to try to get her off the block.

4:55 PM BBT – Alyssa tells Xavier that Claire, Tiffany and Azah are in the room talking about keeping Britini she thinks. She said that Claire had asked to talk to her earlier, so she thinks that’s what’s going down. She says she’s afraid now they will be on the opposite side of the vote. Xavier tells her that he doesn’t think they will be able to flip the vote on DF.

4:57 PM BBT – Kyland tells DF that he told Britini he would not campaign for her to go and he says he will keep doing that because it looks like the vote now wold be 7-1 with Azah being the only vote for Britini.

5:17 PM BBT – Britini is making another pitch to Tiffany and Azah. She tells her that if she goes then someone else will be seeing the block. She says if she’s in the house then she will be taking one of those nomination seats.

5:30 PM BBT – Britini explained how her conversation went. Azah is annoyed. She says that Kyland is just thinking about himself. Tiffany tells Britini it doesn’t matter what Kyland wants. They both tell Britini to not let him manipulate how she wants to campaign and for her to do whatever she wants.

5:32 PM BBT – Britini tells them she thinks she can get the votes to stay over DF.

5:57 PM BBT – Azah says to the cameras that if she did not believe in what they all came there to do she would put Kyland on the block and get him out of there. She says she has huge doubts on Kyland and almost regrets following him for as long as she did.

7:46 PM BBT – Claire and Kyland are meeting. She tells Kyland she’s pretty indifferent with this vote. She says she doesn’t feel either nominee benefits her game one way or the other.

8:08 PM BBT – Kyland asks Derek X if he has a preference on who goes this week. DX says he sees both sides of it.

8:10 PM BBT – DX tells Kyland that he felt Kyland was very unpredictable this week. He said he could never tell where his head was. He says he didn’t understand why Claire was on the block next to DF. Then Kyland threw the veto and that confused him even more. Kyland asks if he’s still confused. DX says not as much but he still has concerns. He says during his HOH he didn’t try to hide anything from Kyland. He says Kyland not telling him much this week made him wonder if he trusts Kyland more than Kyland trusts him.

8:15 PM BBT – Kyland tells DX that he wasn’t trying to deceive him as much as him trying to find justification that would make sense. He says he was I na place where he was still thinking and that DX was filled in when Kyland finally knew for sure what he was thinking.

8:45 PM BBT – Claire tells Tiffany she’s not sure about Britini going this week. Tiffany says she’s not either. Tiffany says the problem is if Alyssa and X want her gone and they keep her … Claire says it has to be all or nothing.

8:50 PM BBT – DX tells Kyland that if Britini is gone then Alyssa and Xavier will likely be looking at DX. Kyland says he thinks Britini would tell Xaiver and Xavier that the whole house was looking at them after Christian. DX says he’s 60 percent leaning toward keeping Britini and 40 for DF. He says but he’d rather keep Kyland over either of them. Kyland says he thinks Britini has a better shot at taking a shot at himself over DF.

9:00 PM BBT – DX repeats that Britini staying gives Alyssa and Xavier a nomination target over himself.

9:05 PM BBT – Kyland and DX discuss if Xavier could beat either of them at the end. They know he’s very likable.

12:20 AM BBT – DF notes that he saw Sarah last night coming downstairs and then pretended to need batteries. He suspects she slept up there the night before and wants to know if Kyland will lie to him about it.

12:25 AM BBT – Britini talking to Xavier about her frustrations over Kyland’s attitude towards her and his questioning. She feels he’s treating her like she’s stupid.

12:30 AM BBT – DF asks Kyland about Sarah sleeping upstairs but he denies the suggestion and says she didn’t. Kyland tells DF he’s safe this week. DF says he’ll nom Claire and Alyssa if he gets HOH. He won’t nom Sarah because she could win Veto and save herself.

12:40 AM BBT – Tiffany warns Hannah they need to win HOH so they don’t end up as the next round of pawns. Tiffany wants Azah as the pawn, not them. Tiffany wants them to get Sarah on the Block because she doesn’t think anyone else will. Hannah says they can plan to take out DX and Claire in the DE.

12:55 AM BBT – Xavier and Alyssa discuss next moves. He says they could nominate Claire and Alyssa.

1:15 AM BBT – Britini venting to Azah over Kyland’s behavior. He is demanding a list of her targets by tomorrow night. Azah says not to comply.

1:30 AM BBT – DX, Claire, Hannah, and Tiffany discuss the option of keeping Britini. DX says keeping her makes others a target and keeps one. Tiffany and Hannah offering reasons why Britini needs to go.

1:50 AM BBT – HGs discussing how Josh beat Paul without deserving the win. They discuss how Paul lied to HGs in the goodbye messages.

2:15 AM BBT – DX talks with Azah about getting Christian out. Azah wonders if it was the right move after what’s gone on this week. They mention how Christian was campaigning still up to the last minutes before the show.

2:25 AM BBT – Claire camtalks that she needs to work on her relationship with Kyland. She questions why DX would trust Kyland. She feels Kyland plays selfish and doesn’t care about his allies’ games. Claire points out that others should be afraid of trusting Kyland because if he’s willing to evict Sarah then he will do it to them too. She says she won’t trust Kyland after he nominated her.

2:40 AM BBT – Sarah has gone upstairs to have her time with Kyland. She’s reporting back what she’s learned.

3:00 AM BBT – Sarah feels they’re making the right move with Britini over DF because Britini can win comps.

3:30 AM BBT – DX, Sarah, and Hannah chatting about who they’ll keep in contact with after the show. Hannah thinks she’ll be friends with everyone but Brent and Travis.

Britini is still fighting for her Big Brother life but it’s not going to help. She’s got one more day in the BB23 house before she’s off to become the first Juror. After that we’ll see if the Cookout can hold the power for another week as they pick off their +1’s.