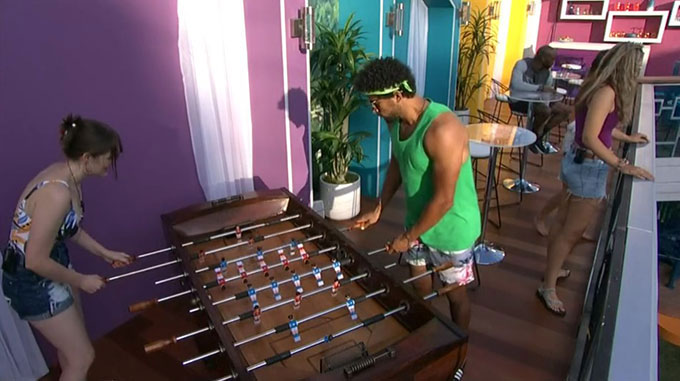 The Big Brother 23 houseguests played the Wildcard Competition Thursday evening, and one potential target earning safety, the week’s target took shape, especially based on the fact that Frenchie is working with almost everyone in the house. Read on to find out who won the competition and who the likely target is as of Thursday evening.

6:49 PM BBT – HGs also got access to the backyard. Everyone is very happy about that and celebrating.

6:50 PM BBT – The outside balcony is really impressive and the HGs are excited about a foosball table.

6:57 PM BBT – Azah mentions the core four to Frenchie and asks if he’s thinking about another alliance also. He tells her that they will iron that down tonight and have everyone in the same room to discuss it.

6:58 PM BBT – Talk has turned to Derek X. Frenchie tells Azah that he’s heard he’s been starting a lot of drama. Frenchie says he’s been told Derek X is starting rumors and thrown people under the bus, including Christian.

7:02 PM BBT – Frenchie tells Tiffany and Derek F that they need to get the group they want all together upstairs and make it official. Frenchie says they then need to figure out who to use as pawns and says it needs to be someone who won’t be upset over it.

7:28 PM BBT – Alyssa tells Derek F that she feels good with Frenchie and so does Sarah Beth, and since Christian is safe from winning the Wildcard Competition and also made Xaiver safe, she suggests their two teams work together. Derek F thinks that is a good idea, but says he can’t make the decision himself since he’s not the team captain.

7:32 PM BBT – Derek F tells Azah that their core four are the two of them, Frenchie, Tiffany, and Xavier.

7:33 PM BBT – Azah and Derek F trust Frenchie but both seem to acknowledge he’ll have to go eventually.

8:03 PM BBT – Derek F tells Brent that he thinks the nominees will be Derek X and Travis.

8:30 PM BBT – Most HGs are in the kitchen getting ready to have dinner.

8:37 PM BBT – Tiffany and Britini are in the backyard balcony and realize you can hear all backyard conversations back there.

8:38 PM BBT – Britini tells Tiffany that she is so happy she’s there and that she’s found so much comfort in her being there. They decide to keep each other informed if either one hears anything. No official deal was made, but something seems to be forming between the two of them.

8:45 PM BBT – HGs are all hanging out in the backyard, playing pool and chatting, and enjoying the fresh air.

9:00 PM BBT – HGs all together planning and champagne toast.

9:10 PM BBT – Kyland and Sarah Beth talk about how the veto could possibly take two people out of the nominee pool. They’re realizing that someone random could end up on the block.

9:11 PM BBT – Sarah Beth makes Kyland an offer to be a secret duo. She says they can still have side things going on and everything, but would basically be ride-or-die partners. He seems into it, but the feeds switched cameras.

9:14 PM BBT – Claire tells Tiffany that she thinks Frenchie will nominate Travis and Brent, but since they could win comps, he might want to backdoor someone.

9:15 PM BBT – Claire laughs about Frenchie saying he is going to do something big. She says it’s the first week, what could be that big the first week.

9:16 PM BBT – Sarah Beth tells Kyland that Frenchie has sworn to not send a woman home first, so it will have to be a man he targets if he sticks to his word.

9:25 PM BBT – Christian tells Derek F that he knows his name was thrown out as a target this week before he competed in the Wildcard Competition. Christian says it was Derek X who was throwing him under the bus. Christian says this week the plan is Derek X. Derek F says he thinks that is correct.

10:00 PM BBT – Brent talks with Derek F about how he heard Christian was warning Frenchie how much attention Brent was getting from the women. Brent says he won’t push this issue now since Christian is safe for the week.

10:20 PM BBT – Travis and Derek X are trying to figure out who will be the noms and target. They want to try and get Brent nominated.

10:35 PM BBT – Frenchie is meeting with Kyland, Christian, Xavier, and Derek F to discuss an alliance called The Butchers which would then expand with more and be called Slaughterhouse. The add-ons for the larger group are not to know about their core.

10:40 PM BBT – Frenchie confirms his plans to target Derek X because he believes DX is making rumors so he will be BD’d this week.

10:45 PM BBT – Group decides Frenchie should put up Travis and Sarah with Derek X as the backdoor plan.

10:50 PM BBT – Frenchie is searching for a woman volunteer to as a pawn (to go up beside Travis). He talks with Hannah, Alyssa, Claire, Sarah, and Azah and promises 1000% safety.

11:00 PM BBT – Sarah expresses concern that if someone is willing to put her up as a pawn then they’re probably not too serious about working with her. Hannah thinks it’s much too early to be doing a Backdoor. They discuss what Frenchie and Christian have been telling them.

11:10 PM BBT – Frenchie tells Brent that Christian “finessed” him but he’s on to him now.

11:30 PM BBT – Travis warns Derek X that Whitney pulled him aside earlier to talk but he figured out she did that just so others could get to the HOH room to talk privately.

12:00 AM BBT – Alyssa worries to Derek F about Frenchie needing a pawn because he hasn’t told them the target so they can’t be comfortable with the request to be a pawn. DF assures her that Frenchie is targeting a man this week.

12:30 AM BBT – Derek X is worrying he could be the target after learning about all of Frenchie’s promises of safety. Tiffany encourages him to talk with Xavier for help.

12:55 AM BBT – Frenchie tells Tiffany and Christian that he doesn’t want to nom a woman. He says he’s down to just three options.

1:00 AM BBT – Derek X is trying to form an alliance with Travis, Tiffany, Claire, and Kyland and name it Firefighters.

1:15 AM BBT – Frenchie meeting with Derek F, Azah, and Britini. He says he’s been working all day to collect information and it’ll help them.

1:45 AM BBT – Derek F is reassuring Frenchie that Derek X has to go this week or he’ll be working with all the Bros.

2:00 AM BBT – Xavier talks with Alyssa and Christian and says he thinks he talked Frenchie out of his BD plans. They don’t think Travis is a threat. Christian is okay with Derek X going this week then Travis next week.

2:30 AM BBT – Tiffany and Claire are going over what Frenchie is doing and saying. They wonder if he’ll put up Travis and Derek X then what he’ll do if either comes down.

3:10 AM BBT – Frenchie tells Kyland how he promised the women safety this week but then when he needed one of them to help him by being a pawn they didn’t want to help. Frenchie claims he did not actually need a pawn, but was testing them and now he knows.

3:20 AM BBT – Kyland is back downstairs and relays to the Firefighters what Frenchie was telling him. Tiffany shares that Frenchie is forming a 13-person alliance.

3:55 AM BBT – Brent asks Frenchie if he has his noms picked. Frenchie says he does and no one knows his target. Brent promises to vote with them. Frenchie thinks Christian and Derek X are both coming for him. He thinks the target will be shocked.

Frenchie is playing messy and that’s fun for us but we’ll have to wait and see if he pulls off his mission to evict Derek X or if things will shift again. Nominations are coming up on Friday after another potentially long day of Frenchie flailing around.