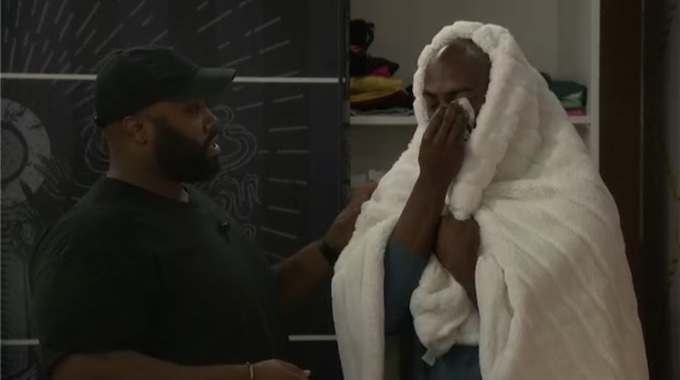 It was a busy morning for the Head of Household for Week 8 of Big Brother 23 as she finished up some one-on-ones and prepared for this week’s Nomination Ceremony. The Nomination Ceremony came and went and three houseguests were put on the block to start this week of Big Brother 2021. Read on to find out which houseguests hit the block and who Tiffany would like to see go to Jury next.

7:50 AM BBT – Hannah is talking to Tiffany and says that she wonders if Derek knows that even if he wins the Coin of Destiny that he still have to win the coin flip? Hannah tells her that if she wins, she isn’t telling anyone, including Claire and just let everyone think it’s Derek.

8:25 AM BBT – Kyland continues to try and convince SB that he is the target with different scenarios, but she is just getting annoyed. Says that they don’t even know if they are going on the block yet.

8:35 AM BBT – Tiffany is camtalking about how she has made her decision and she hopes that whoever wins the Coin of Destiny is someone working with her so that her noms stay the same. She confirms that she is nominating SB and Kyland this week.

8:46 AM BBT – Kyland tells Derek that SB is really stressed out about this week and it makes him sad. Derek says that he will help keep her calm and laughing.

8:50 AM BBT – Tiffany is telling Claire that she wants to talk to Alyssa this morning before the nominations. She then tells Claire about all the things that SB said about Alyssa last night.

8:53 AM BBT – Claire tells Tiffany that she believes some of the things that SB brought up, but also believes her (SB) when she says she will do anything to get to the end. Tiffany says that the only person that SB has loyalty for is Kyland and she mentions that she even proved that she didn’t have any to him last night too.

9:05 AM BBT – Tiffany sits down with Alyssa and tells her that SB gave her a lot of information last night. She says that SB is trying to paint a picture for her that Alyssa is coming after her (T) and that Tiffany shouldn’t trust Alyssa. Tiffany confirms that SB is her target this week and asks that if for any reason Tiffany is on the block next week, she just needs Alyssa’s vote to stay.

9:18 AM BBT – Alyssa tells Tiffany that she will 100% keep Tiffany as safe as she can next week. She adds that Tiffany is not a target for her.

9:20 AM BBT – Tiffany is camtalking after Alyssa leaves saying that SB knows exactly what to do to stay in this house, but her plan is to send SB out to Jury right behind Derek X.

9:26 AM BBT – Claire does a shoutout to the cameras for Tiffany winning HOH and then says that she hopes that the Coin of Destiny doesn’t screw anything up for her.

9:33 AM BBT – Claire is still camtalking about not trusting Kyland or Alyssa, but feels like Xavier can be trusted because he’s a straight forward guy. Claire says that she wants these boys out though.

9:40 AM BBT – Kyland goes up to talk to Tiffany because she wanted to run her speech by him.

9:50 AM BBT – Tiffany lets Kyland know that she did talk to Alyssa, but didn’t give her anything that SB said to her specifically. She just wanted to know where she stood with Alyssa and he tells her that he told SB last night that whatever she said to Tiffany made her think about Alyssa a little bit more, but they would likely still be on the block.

9:52 AM BBT – Kyland tells SB that he talked to Tiffany and it felt like she was confirming they would be nominated, but that she would be open to an Alyssa renom if one of them comes down.

11:02 AM BBT – Feeds are back from the Nomination Ceremony. Sarah Beth, Kyland, and Xavier are all on the block.

11:03 AM BBT – Derek is asking SB who he should put up if he wins the Coin of Destiny and she says ideally she would like to see her and Kyland come down. He says so Claire and someone else.

11:08 AM BBT – Tiffany tells SB that there are more things about Alyssa and Xavier that make her more comfortable than SB and Kyland, Kyland specifically. SB says that it makes sense that if Kyland was her target that she would put SB up next to him.

11:20 AM BBT – SB leaves and Tiffany says to the cams that she just lied to that girl’s face.

11:23 AM BBT – SB tells Xavier that she kind of had a heads up and added that Tiffany mentioned having a lot of distrust with Kyland. Xavier says that he was pretty sure that Tiffany was going to put them up since Xavier is already there and it garaunteed that two of them would still be up there post veto.

11:25 AM BBT – SB says that if Xavier wins the secret HOH then he would come off the block, but Xavier says that he won’t have enough BB Bucks anyway. Xavier tells SB that if she needs to throw Xavier under the bus, she can if she hasn’t already. He says that he will never lose sight of the fact that this is a game.

12:24 PM BBT – Feeds come back up and there is a new nomination chair that will fit the three nominees.

12:30 PM BBT – Tiffany is filling Xavier in on all the things that SB told her last night and how she threw both of them under the bus. She tells Xavier that SB really wants her to take a shot at Alyssa this week.

12:35 PM BBT – Tiffany tells Xavier that SB knew the whole time that Christian was being backdoored in Week 5 and she has never been loyal to him or Alyssa.

12:40 PM BBT – Tiffany asks what happens if SB comes down? Xavier says this game gets really interesting. He adds that he isn’t going to let that happen though.

12:57 PM BBT – Tiffany tells Azah that SB thinks that Kyland is her target this week. She tells Azah that Kyland has been shifty and his actions have been sketchy. At least she knows when it comes to Xavier that he is loyal to his team and won’t put Azah or Alyssa up. Kyland put up Claire and threw the Veto to Alyssa.

1:21 PM BBT – Tiffany gets called to the DR and the feeds flip to pet cams for High Roller’s Room Twist.

This is the final week for the High Roller’s Room which means any HG that has enough to play in the Coin of Destiny will. Based on talks inside the house, the only way the noms might change is if SB or Kyland manages to get enough BB Bucks to play. Even if they win the comp, they would still have to guess the coin flip correctly in order to take over as HOH. Stay tuned for spoilers on that later!