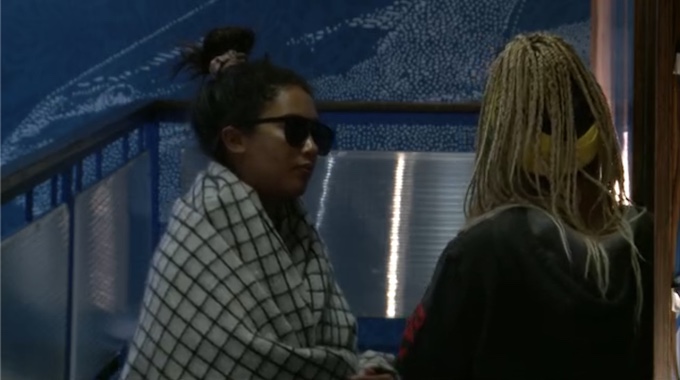 It is Eviction Day inside the Big Brother 23 house and this week’s target continued to try and rally votes in order to stay this week and not become the first member of the Jury. Some of the Big Brother houseguests are trying to figure out if there is any way to save Britini this week. Read on to get all the details.

8:54 AM BBT – Kyland tells Xavier that Hannah came to him about keeping DX around next week and Kyland told her that he either has to go or he has to spend his BB Bucks. Xavier agrees. Kyland also told Hannah that if DX stays, then Hannah is responsible for DX’s actions.

8:59 AM BBT – Xavier tells Kyland that they are getting closer and closer to having show their cards. If they are going to have to show their cards, he says that he would rather not have DX in the house when they do.

9:10 AM BBT – Xavier says that if the HOH comes down to him taking a shot at DX or DX being in power next week, then he is going to fight for the HOH. Xavier says that he is willing to keep DX around for another week if DX spends all his BB Bucks.

9:17 AM BBT – Xavier tells Hannah that he would more okay with not winning HOH if DX uses all his money this week. Hannah tells him that he would because seven people could potentially play in this week’s twist and it would ensure that he didn’t go up if he wins. Xavier tells Hannah that he isn’t dropping out of the HOH until DX is out because he can’t risk DX being in power again.

9:19 AM BBT – Xavier asks Hannah who she would put up and she tells him that she is thinking Kyland and SB because that would make DX more incentivised to play in the roulette.

9:25 AM BBT – Xavier asks according to her plan, who would be up on eviction night? She says that if it were a member of the Cookout, the best option would be Azah the safest option to send SB to Jury.

9:50 AM BBT – DF tells Kyland that he feels like Tiffany took advantage of him being on the block and unable to defend himself when she came at him last night. Kyland agrees and says that and adds that people are going to start wondering why DF and Tiffany aren’t going after each other which is going to raise questions.

9:52 AM BBT – Tiffany walks in and Kyland lets them both know that their argument last night was audible and people heard what was being said. Tiffany says that they didn’t say anything about anything. Meanwhile, DX and Claire are in the bathroom talking about HOH/noms scenarios.

10:00 AM BBT – Tiffany tells Kyland that if he is next to SB, he is safe. Kyland says not according to Hannah, Xavier or anyone else has said. Tiffany says that she knows who Claire’s target is and it’s not Kyland. Kyland mentions that it’s her job to know that just like it’s his job to know who SB would target. She asks who and he tells her DX and Claire because they tried to flip the vote.

10:03 AM BBT – DF asks if he wins wouldn’t it be smart for him to put DX and Claire up so they have to use their money? Kyland and Tiffany say Claire doesn’t have any money.

10:10 AM BBT – Tiffany leaves the HOH and Kyland tells DF that he isn’t sure if Tiffany realizes that she doesn’t hide her emotions well. He knows that Tiffany is upset right now. DF tells Kyland that he has literally moved on from the situation so that they can continue to work together.

10:15 AM BBT – DF says that Tiffany thinks that everyone is out to get her and they just aren’t.

12:45 PM BBT – Xavier tells Azah that he isn’t throwing the HOH until DX is down. Azah tells Xavier that she can’t take a shot at DX because she made a deal with him. Xavier mentions that he prefers DX going this week because he is the only one with enough BB Bucks to get a power. Azah says that’s why it’s best for DF or Xavier to win HOH, because they can take the shot.

12:53 PM BBT – Alyssa, Xavier, and SB are talking about the fight between DF and Tiffany. Alyssa says that she just wanted to make sure that nothing changed and SB told her as far as she knows, Tiffany and Claire are still voting out Britini, DX is still back and forth, and Hannah has wanted to vote her out the whole time.

12:55 PM BBT – Alyssa tells DF she is feeling pretty good, unless everyone is lying to her. DF says, you never know. DF retalls what happened between him and Tiffany in the Storage Room (Alyssa was sleeping).

1:10 PM BBT – Azah tells DF that if there is any Cookout votes for Britini it should be her because that’s her person.

1:20 PM BBT – Britini is stressed and feeling sick and DF is giving her a pep talk.

1:27 PM BBT – Claire tells DX that they couldn’t convince Hannah. DX says they have the power to choose who goes this week, but Claire says now without Hannah. She adds that Hannah should be the least close to Ky, but DX thinks that Hannah is more worried about Xavier and Alyssa.

1:32 PM BBT – DX tells Claire that he really wants Britini to stay and Claire says she does too but she doesn’t think they can make it happen. DX mentions that would give Xavier a target.

1:35 PM BBT – Claire says that she is nervous about the roulette because she has heard that people want to put up people who would spend their money. She tells DX she has a feeling that will be him.

2:20 PM BBT – DX and Kyland are talking about the different scenarios that could play out with the roulette power.

Unfortunately for Britini, the hope she is holding onto isn’t going to be enough for her to stay. We are closing out week 6 of Big Brother with Claire and DX wanting Britini to stay, but not enough support to make it happen. With that being said, who do you all want to see win tonight’s HOH competition?