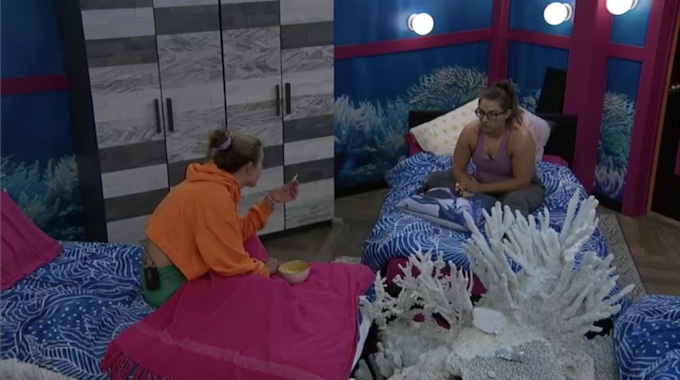 It was a busy day for one of this week’s nominees on Big Brother 23 as they started their campaign trail and tried to rally some early votes. Meanwhile, the other nominee on Big Brother has vowed not to do any campaigning this week. Even though Kyland has made his target clear to the rest of the house, some of the Big Brother houseguests are thinking about going against that. Read on to get all the details here.

10:25 AM BBT – Britini is going over some of her campaign points with Azah and plans to mention that this is a personal move for Kyland, not for everyone else. She plans to try and talk everyone into making their own personal move by keeping her in the house.

10:35 AM BBT – Kyland and Xavier are talking about scenarios for next week depending on who wins HOH.

10:55 AM BBT – Xavier tells Kyland that the longer they keep DX in the house, the more dangerous he becomes. Kyland says that he doesn’t see a reason why they should keep him past next week.

11:10 AM BBT – Azah apologized to Alyssa for the part she played in Christian’s eviction. She tells Alyssa that she just made the move she felt was the best for her game. Alyssa tells her a game and there’s no reason for her to feel bad about her decision.

12:30 PM BBT – Xavier and Tiffany are talking about how they are going to get rid of either DX or Claire next week. Xavier talks about having to put Tiffany and Claire up and backdoor DX. Tiffany says that DX is planning to play in the roulette because if they win, they would be safe.

12:35 PM BBT – Xavier asks DF how he is doing and he tells him he’s doing okay, just doesn’t feel comfortable right now. Xavier tells him that they aren’t going to let him go home.

12:46 PM BBT – Britini tells Azah that DF told her she should go kiss up to Kyland today, but she says she isn’t going to do that. Britini adds that if everyone played their own game, she wouldn’t have to do that in the first place.

12:50 PM BBT – Britini tells Azah that talking to SB about this is going to be like talking to a brick wall.

1:22 PM BBT – Claire talks to Britini and asks her if she has a pitch for the guys. Britini tells her that she is just going to tell them that DF is the ultimate pawn and anyone who sits next to him will go home. Claire says that’s her winning argument.

1:30 PM BBT – Britini thinks that she has a convincing argument to stay in the house because everyone stays safer with her in the house.

1:32 PM BBT – Britini asks Claire if she has talk to Tiffany and she says she has and she seems very open to the idea of keeping Britini this week. Britini says she is the only one campaigning, so you would think.

1:40 PM BBT – Claire continues to give Britni hope that she could stay this week. Meanwhile, Hannah and Tiffany are upstairs talking how Claire and DX were talking about flipping the vote. When Tiffany mentioned losing Kyland if they did that, DX asked her what that mattered if they were getting Kyland out next week. Hannah tells Tiffany that they have to convince DX and Claire to keep DF.

1:45 PM BBT – Tiffany says that if Claire and DX are so stuck on flipping and Hannah and Tiffany don’t, they (C&DX) are going to realize that something is going on. She adds that Claire or DX have to go and DX doesn’t seem to be as observant as Claire so she has to go. Tiffany says that maybe it wouldn’t have been a bad idea for her (C) to go this week.

2:19 PM BBT – DX tells Tiffany and Hannah that he wants to talk to Kyland about keeping Britini. He says that he wants to mention to Kyland that now that they are this far in the game, they might not want to keep people around that they know they will go home if they are sitting next to them. DF is one of those people. Tiffany wonders what Ky’s counter would be and DX says that Britini is going after him.

2:38 PM BBT – Tiffany tells Kyland that they are probably going to have to send Claire home next week. She says that even though Kyland and Xavier want to get DX out next week, Claire is getting too wise. She also fills Kyland in on DX planning to come to Kyland about keeping Britini this week.

2:40 PM BBT – Tiffany tells Kyland that Claire is the one bringing these ideas to DX and convincing him that DF needs to go this week.

2:48 PM BBT – Britini goes over her pitch to Xavier with Azah. She tells Azah that she is going to use that she is a competitor and can help them get the bigger people out. She also plans to mention that she is a big sheild for Alyssa and for everyone else too.

2:53 PM BBT – Kyland tells Britini that he doesn’t feel the need or desire to campaign either way (for Britini or DF to go). Britini tells Kyland that DF isn’t campaigning to anyone, but he is telling her that she has to. She also tells Kyland that she is trying to focus her campaign on the things that she can offer to the rest of the HGs.

2:57 PM BBT – Britini tells Kyland that she is pretty sure that it could be a tie this week and she doesn’t know where Kyland would go if there is. Kyland tells her that he isn’t prepared to even answer that.

3:00 PM BBT – Kyland tells Britini that if she is going to talk to someone and her best campaign to that person is about Kyland, that he recommends that what she says is the truth for that person and they aren’t going to go back and let him know what she said.

While Britini hit the campaign trail, DF spent the day upstairs in the Have-Not room to be alone. Meanwhile, DX and Claire really want to see the house flip the vote and for Britini to stay, but can they get enough votes? Now that Tiffany has given Kyland a heads up that DX wants to keep Britini, I’m curious to see how DX and Kyland’s conversation goes later on.