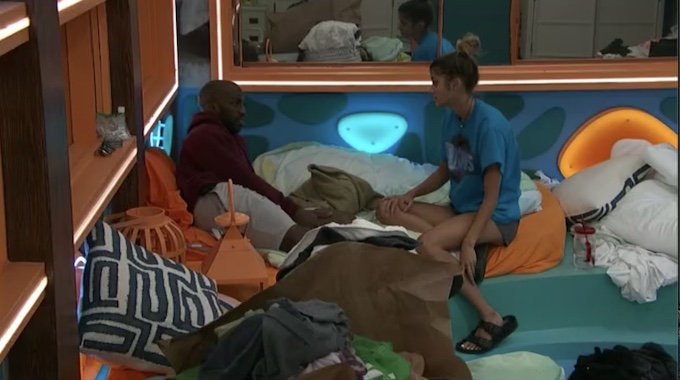 It is Eviction Day inside the Big Brother 23 house and this week’s target had one last Hail Mary before tonight’s live eviction. Was this Hail Mary attempt a good enough pitch to get Derek X to change his mind about sending Christian home on Big Brother? Read on to find out!

8:45 AM BBT – DX asks Kyland what the Detectives do if they win HOH. Kyland says he thinks it would have to be Alyssa and Britini. Kyland mentions that for risk of potential retaliation, he doesn’t think it matters if it’s Britini, Azah, or Derek F.

9:15 AM BBT – Tiffany and Hannah are talking about if it’s a DE who do they go after? Kyland and SB? Tiffany says that’s what she was thinking. They then talk about maybe putting Britini and Azah up if Hannah wins.

9:18 AM BBT – Hannah tells Tiffany that she thinks that Britini is the least threatening out of her (B), Alyssa, and SB when it comes to the Cookout.

9:20 AM BBT – Tiffany asks what Hannah thinks of Claire and they agree that the only one in the Cookout that Clarie would go after is DF.

9:30 AM BBT – Kyland tells DX that there is no way that Xavier is a bartender because he gets tired at 10 PM. DX says that he never thought of that. Neither of them think he is a lawyer though. DX says he thinks Xavier might be a cop because he never talks more than he wants to.

10:18 AM BBT – Christian says that he is going to talk to Hannah one more time today and DX. He says he is going to see if DX would be more willing to do a one week deal rather than the longer one he proposed.

10:25 AM BBT – Christian pulls Hannah aside to talk to her. He apologizes for not talking to her yesterday, but a lot was going on. He then explains himself as far as why he put her on the block.

10:30 AM BBT – Christian tells Hannah that he was thinking about proposing a modified deal to DX and at least give him safety this week if he stays and then if he (DX) wins next week, he can go after Christian. Hannah tells him she can talk to DX, but she wonders if he even has the numbers. He says that if he tells Tiffany, Claire, and Azah that he wants Christian to stay, they will vote to keep him.

10:35 AM BBT – Christian mentions that if SB stays that he is worried that she will be getting a large check at the end of Jury. He mentions knowing what Hannah saw in the sky…feeds cut instantly.

10:37 AM BBT – Christian says that he thinks Kyland is part of a duo with her and knows that she is America’s Player. He thinks that’s why SB kept the money rather than taking the Veto because him (Kyland) taking the Veto probably got him some kind of cash prize too.

10:50 AM BBT – Christian tells Hannah that if he stays, his number one target would be Kyland and he would probably put a Joker up with him.

12:45 PM BBT – DF and Azah are telling Britini that Christian is playing mind games with her by saying he’s going one second and then trying to stay the next. Meanwhile, Christian is telling Alyssa up in the HN room about the deal he plans to take to DX.

12:46 PM BBT – Hannah, Claire, DX, and Tiffany are making a plan in case tonight is a DE and say that they should put Kyland and SB because they have the votes to keep Kyland.

1:00 PM BBT – Christian goes to DX and tells him that he is willing to make a more practical deal with him. He promises that DX and Hannah would be completely safe from him if he wins HOH. He says he knows that other people have been telling DX that he’s Christian’s target, but he isn’t.

1:03 PM BBT – Christian even offers to throw the HOH competition to Hannah or anyone he wants. Says that the only reason he put Hannah up last week was to keep his teammate (SB) happy.

1:07 PM BBT – DX tells Christian that he trusts everything he is saying to be true, he is just trying to figure out if keeping him is what’s best for his game. Christian reminds him that if he stays, Christian and Alyssa will be the only ones to hit the block in the coming weeks until they are gone.

1:10 PM BBT – Christian tells DX that if they get SB out now, they get rid of someone who is directly targeting Hannah. Christian says that if he decides to keep him, the only people DX will have to get to flip their vote is Claire, Tiffany, and Azah.

1:20 PM BBT – DX is deep in thought about what Christian just brought to him.

1:24 PM BBT – SB asks DX what that was all about and he tells her that it was Christian’s Hail Mary.

1:26 PM BBT – Christian fills Hannah in on his talk with DX and all he said was that he had to think on it.

1:32 PM BBT – Alyssa asks DX if there is anything she can do to make Christian’s deal more appetizing. He says not really, he just needs to figure out which one is better for his game. She says that if Christian stays and she wins HOH, DX and Hannah aren’t on her radar.

1:38 PM BBT – Alyssa asks what he’s thinking about and DX tells her that he is just heavily considering both sides of this. Alyssa also tells him that she will even throw the HOH to Hannah if Christian stays.

1:40 PM BBT – SB tells DX that she is a little worried and stressed because she really didn’t campaign hard for herself. He tells SB that his mind hasn’t changed and he isn’t wavering from that. She says that she is worried about everyone else.

1:43 PM BBT – SB tells DX that if he started going around telling people that he wanted her out all of a sudden, that would be horrible for his game too. She says that everyone is going to think that he is working with Christian and that would scare everyone into voting him out anyway.

1:50 PM BBT – Hannah tells DX that it wouldn’t be smart for him to take Christian’s deal. She tells him that if they keep Christian, they lose DX and for her keeping DX is an easy choice for her.

1:55 PM BBT – Xavier and Alyssa are doing some damage control with SB.

1:58 PM BBT – Claire tells DX that it doesn’t make sense to get rid of SB, the problem is, Tiffany told SB some things, SB went and told Kyland, and Tiffany knows that. DX tells her that he wants Alyssa gone more than SB next week.

2:01 PM BBT – Christian tells Hannah that he thinks that the best way they can make the vote flip look like DX had nothing to do with it is if Hannah still votes him out and then Tiffany, Claire, and Azah vote to keep him.

2:03 PM BBT – Hannah brings this idea to Claire and DX. DX tells her not to relay anymore of Christian’s ideas to him unless she legit thinks they are a good idea. He asks her if she thinks it’s a good idea, she says no.

2:07 PM BBT – Tiffany tells Xavier that she still wants Christian to stay and if he (C) isn’t going to target Hannah, then she has no problem with him saying. Xavier tells her she doesn’t have to explain this to him because he (X) was the one who gave Christian all the ideas. Xavier tells Tiffany that as soon as he has a chance to take a shot at DX, he’s taking it.

2:13 PM BBT – Tiffany asks DX if Christian’s campaigning is working on him and he says no. She says she is okay with him leaving, she’s just so tired this week.

Christian worked every angle he could to try and stay in the Big Brother house, but unfortunately, his efforts were just not enough to convince DX or anyone else to keep him in the house. Tonight, after Christian is inevitably evicted from the Big Brother house, the remaining HGs will compete in this week’s HOH competition. Don’t forget, a new twist will also be introduced tonight so be on the lookout for more details on that!