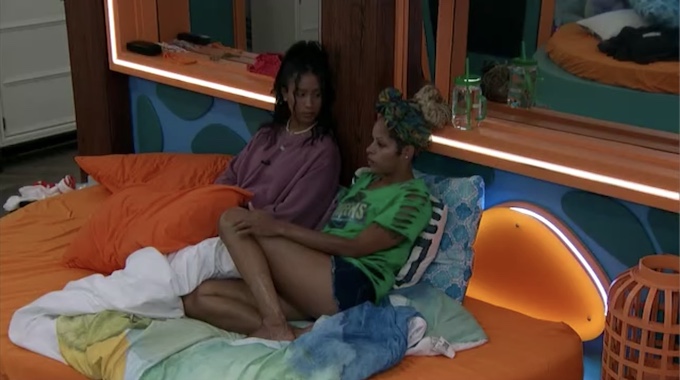 It was Veto Meeting Day inside the Big Brother house and this week’s final noms have been locked. Meanwhile, Tiffany is working hard trying to paint a target on a fellow Big Brother houseguest going into next week. Read on to get all the details of what the houseguests talked about on Monday right here.

9:50 AM BBT – Azah tells DF that she thinks her parents are embarrassed for her because she clearly has a crush on Xavier and has been side eyeing Whitney when she notices her advances.

9:55 AM BBT – Alyssa is telling Xavier about how Britini walked in on her and Christian and refused to leave. Adds that she just stood in the doorway with the door wide open for everyone to hear what they were talking about. Kyland comes in and the conversation shifts.

10:00 AM BBT – Azah tells DF that she has had a lot of one-on-one conversations with everyone in the house except for Christian.

10:58 AM BBT – Feeds come back. Kyland and Xavier and cleaning the kitchen. Christian and Alyssa are going over days and events. Doesn’t look like anything happened during the downtime.

11:05 AM BBT – Kyland comes into the HOH room and sits with Alyssa and Christian while they go over days and events.

11:20 AM BBT – Kyland leaves the HOH and Christian and Alyssa wonder why they continued to go over those with him in the room if they want him out soon. Christian is hoping that Kyland doesn’t share his counting method with everyone.

11:23 AM BBT – Kyland tells Xavier how Alyssa and Christian are very ellaborately going over the days but he wonders if they were pretending they weren’t very good at it.

11:40 AM BBT – Claire and Kyland are going over the different comps so far this season.

11:45 AM BBT – Claire tells Kyland that she thinks if the Kings win again next week, they will go after Hannah. Kyland says that he would rather see Britini go. Claire feels like they don’t really know everyone’s physical abilities and she believes that Britini would win more comps than Hannah would.

1:02 PM BBT – Feeds are back. Christian did not use the Veto. Hannah and Whitney remain on the block.

1:15 PM BBT – Tiffany tells Hannah about how SB was pushing to have Hannah targeted this week when the Kings and Queens met. She tells her that SB was so worried about no one saying Hannah was a target, but no one is saying SB is a target either. SB joins the convo and it shifts to family.

1:20 PM BBT – Christian tells Azah that he feels like he got the last easy week.

2:05 PM BBT – Claire tells Alyssa Kyland has one of the best memories in the house and he’s acting like he doesn’t remember anything.

2:27 PM BBT – Xavier is in the HN room crying. He has a bracelet that belonged to his late brother and it broke. He’s having a hard time dealing with it.

2:30 PM BBT – Alyssa tells Azah that she doesn’t think that someone in jury would vote for someone just because they were on their team. Alyssa wonders if teams will end this week or next. Azah thinks that they will end next week, but Alyssa thinks it will end this week.

2:50 PM BBT – SB is crying in the bathroom, Kyland is consoling her. Apparently she is afraid of moths and Christian and Claire have been nursing one back to health.

3:00 PM BBT – Alyssa and Christian think that the teams are going to end after this week. Alyssa tells Christian about her conversation with Claire on how Kyland is acting dumb when it comes to the days and events but Kyland has the best memory in the house.

Tiffany has been throwing SB under the bus to every houseguest that will listen. With the teams ending this week and an endurance comp for the next HOH coming up later this week, what are the chances SB will be the next target? I’m sure we will be watching Tiffany putting in overtime to make it happen.