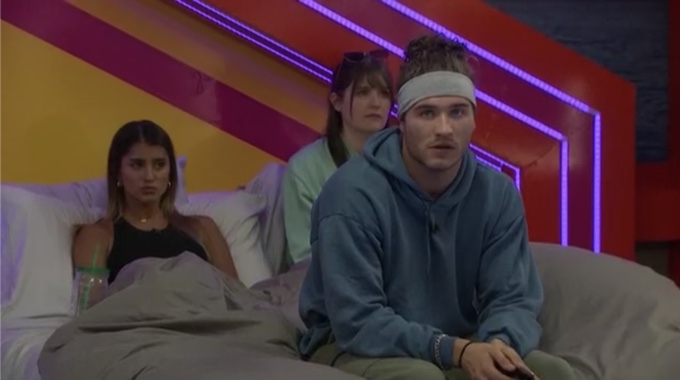 It’s been a busy day inside the Big Brother house with the Wildcard Competition taking place and the Head of Household holding individual and team meetings. The big question that plagued the house on Friday was who should be the target for Week 4 of Big Brother 23? After a bit of back and forth, it seems like Christian might have an answer. Read on to find out which Big Brother 2021 houseguest could be in trouble.

8:25 AM BBT – Whitney mentions that she is competing with either Azah or DF and Claire today. Britini says she is happy that she isn’t competing in that this week.

8:30 AM BBT – Kyland tells Hannah that she should tell Christian that she didn’t want to put up a King if she won HOH, but she would have felt pressure from the house. So she talked to someone she trusted and they suggested to put SB up because anyone else from the Kings would have gone home.

8:35 AM BBT – Hannah tells Kyland she thinks if she tells them that if she won HOH, going after the Kings wouldn’t be in her best interest would fit her narrative from last week better.

8:42 AM BBT – Xavier tells Christian that if they go this week without putting any of the Jokers up, then they would be in a good position with them. Xavier tells him that he can just say something along the line of “it’s come to my attention that if either of you won, you would come after members of my team.” He adds that Christian should also mention he doesn’t have a clear target.

8:50 AM BBT – Christian tells Xavier that he isn’t worried about Whitney and Xavier tells him that he doesn’t think he has to worry about Hannah either. Christian says he feels like Hannah trusts him and Xavier mentions that when he put Britini up, he knew that she trusted him and it’s important to use that.

9:00 AM BBT – Christian says he is going to do one-on-ones after the competition. Christian leaves the room and Xavier says to the camera, “Here we go. Steering everyone on the Whitney train.”

9:55 AM BBT – Hannah talked to Xavier and told him he would like to talk to Christian one-on-one but she doesn’t think that’s going to happen. Hannah tells him about the advice that Kyland gave her earlier, but she thinks she should stick with telling them that going after a King doesn’t do anything for her game. Xavier agrees she should stick with that.

10:03 AM BBT – Alyssa tells Xavier that it’s starting to make sense that Whitney should go first because he won’t have her trying to cuddle with him and make him a target and she thinks they can get Hannah to work with them.

12:53 PM BBT – Feeds are back from the Wildcard Competition and we find out that Claire won the comp.

1:05 PM BBT – The Royal Flush is meeting in the HOH room. SB is pushing for Hannah to be the target this week and says that on multiple occasions she has heard Hannah mention SB and Alyssa’s name. When asked what Hannah has won, SB tells them she has been throwing competitions. SB says that she is happy that some people can think about Jury votes, but she is just trying to make it to Jury and if Hannah stays, she won’t make it past next week.

1:15 PM BBT – SB tells Royal Flush that everyone pushing not to target Hannah is the exact reason Hannah should be the target. Kyland says that if they are fighting for Hannah, then she (SB) is fighting for Whitney.

1:20 PM BBT – Christian is asked what he thinks and he tells them that whatever is good for the alliance is good for him. He says that not putting up Britini builds trust with the Jokers. He thinks that putting Hannah and Whitney up, he splits up those two and DX is has one less ally (H).

1:40 PM BBT – DF tells Christian that he knows who the target should be this week and it’s walking around the house with blonde extentions. Britini says that she agrees that the encyclopedia (Hannah) is a little scary, but Whitney is the spokesperson. Britini tells him that he just has to do what’s best for his game.

1:43 PM BBT – Xavier tells the rest of the Kings that he thinks their team has done enough in the house to make people comfortable with them. He thinks that whatever move that pisses the least amount of people off is the way that they need to go. Christian thinks that based on their conversation with the Jokers, he thinks Hannah should be their target because the Jokers are going to take out Whitney next week.

1:48 PM BBT – Whitney tells Hannah and DX that she wants to push for Kyland to be one of the noms because no one will win against Kyland. She says that Kyland needs to be out before Jury. Whitney mentions that Claire has safety until Jury already, so they need to look at the other Queens. Hannah says that she doesn’t know what Kyland’s relationship with Christian is like though so that might be hard.

1:55 PM BBT – Christian is going over what he wants to say to Whitney and Hannah with the Kings. They are giving him advice on what to say and not to say.

2:00 PM BBT – Hannah is meeting with Christian and he tells her that it seems like the house is going after Whitney. He says that he can’t put DX up because he will go home against Whitney. He implies that he wants to put Hannah up, but she asked him who would be the target if Whitney wins the POV. He tells her a Joker.

2:02 PM BBT – Hannah tells Christian that he has to start thinking about his individual game because the teams are going to be over soon. Hannah tells him that if he put a Joker up next to Whitney, she still goes home. Christian says that he doesn’t want to make two teams mad. Hannah says that he wouldn’t be making two teams mad, it would only be the Jokers who are mad. Her and DX are aware that Whitney is the house target.

2:08 PM BBT – Hannah asks him out of Britini, Azah, and Hannah, who is going to have his back? He says Hannah would and she asked him why he would put her safety at risk then when Whitney will still go home next to Azah or Britini.

2:22 PM BBT – Ky tells DX that Whitney and Hannah are on the block, they have the numbers to keep Hannah safe.

2:25 PM BBT – Hannah tells Christian to do what’s best for his game and putting her up isn’t smart for his game. Hannah gives him a hug and leaves, Whitney comes in. He asks Whitney what her plans for next week is and she told him she would like to work with him, Alyssa, Xavier, and DX.

2:35 PM BBT – Whitney leaves and Alyssa comes into the HOH to talk to Christian. He tells her that Hannah made some great points and she hasn’t lied to him yet. He wants to do the same noms, but wants Whitney to go home. They aren’t buying Whitney’s pitch to them.

2:45 PM BBT – Xavier tells Tiffany that it’s hard to argue with the fact that if they don’t win HOH next week, having Whitney in the house as a target is best for their game. Tiffany says that they have the votes to keep Hannah, but it will blow up their game. Xavier says that Hannah needs to win the POV.

2:53 PM BBT – Alyssa says putting up a guy is hard because three have gone home already. Hannah she’s worried that Britini would win the POV and take Whitney down. Christian tells her that Britini threw Whitney’s name out there too.

2:59 PM BBT – Hannah asks if she pulls HG Choice, should she pick Xavier? Christian is worried by how that would look. Hannah says she would pick DX but she thinks that he is worried about gunning it and winning it again might hurt his game. Hannah leaves and Christian says he thinks that went really well and Alyssa says she feels bad. Christian says that he would prefer that DX plays for her. He says that he feels better about Hannah staying now.

As of right now, Christian is at least set on the fact that Hannah and Whitney need to go up together. However, he hasn’t done all of his one-on-one chats just yet. The target will likely shift some more between now and the Power of Veto meeting which will take place tomorrow inside the Big Brother house. One this is for sure, things have the potential to get pretty interesting this week depending on who wins this week’s POV competition!