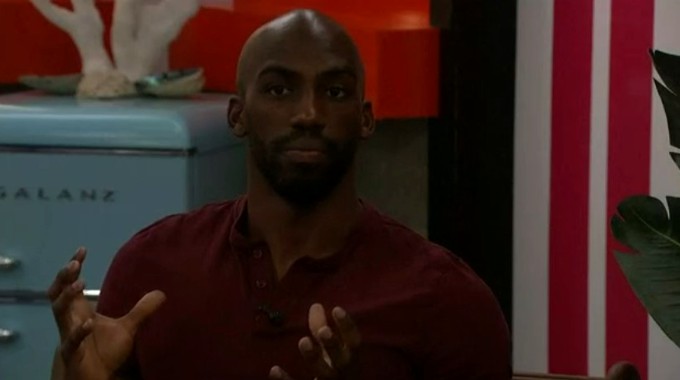 It’s been a double dose day for Big Brother 23 Houseguests with both the Wildcard Comp and Nominations so plenty of action and fun on the Live Feeds this afternoon. Xavier had to wade through some tough talks and deception along the way leading up to his reveal of which HGs would hit the Block after a surprise team-up in the Wildcard didn’t make his job any easier.

9:07 AM BBT – Kyland and Tiffany chat in the HN room and finalize a F2 deal. They try to work out a name for it.

9:12 AM BBT – Alyssa tells Xavier that it sounds like the Aces are planning to leave their Wildcard Comp choice up to chance. Xavier says he prefers DX plays from their team.

9:18 AM BBT – Xavier asks DX to try and convince his team to let him play in the Wildcard Comp. DX asks if Whitney is willing to throw, would be be okay with her playing. They nix the idea and DX says he will ask to play.

9:28 AM BBT – Hannah and Whitney agree that they can not have Xavier, Christian, and Alyssa all in jury together. Hannah thinks that Alyssa is the glue that holds the three of them together though so if they are only going to get rid of one, it should be her.

9:38 AM BBT – Azah and DF talk about if Brent goes home this week a girl has to go next week. Azah says it depends because if Brent wins POV, Whitney will go home this week and the going after Brent next week again will be okay.

9:52 AM BBT – DF tells Britini that he is cool with getting all the guys out, but then that will eventually leave him by himself. He says that he is okay with getting Brent out this week, but next week a girl has to go.

9:58 AM BBT – Azah and Britini talk about nomination possibilities and how Brent and Alyssa could end up on the block and Britini wonders who would go up in his place if Brent should win POV. Azah says Whitney.

1:43 PM BBT – Tiffany talking with Claire and Kyland about her win in the comp. They’re discussing how to present her win to the rest of the house.

1:45 PM BBT – Britini is pacing around and upset that she didn’t win. She’s worried and stressed. Britini says she was obviously getting teamed up against in the comp by DX and Tiffany.

2:00 PM BBT – Azah and DF are upset along with Britini. They question if they can trust DX now after he teamed up with Tiffany to get out Britini. They say they have to watch what they say to Tiffany. DF wants her out of the Cookout first.

2:10 PM BBT – Xavier talks with Hannah about noms plans and Brent going up. X explains Brent will be made to feel like he’s not the target.

2:15 PM BBT – Whitney’s turn and she says she hopes the target is one of her team members. Xavier says they’re thinking the same thing. X feels bad about nominating Britini and wonders if she will keep the secret (of the real target).

2:20 PM BBT – Alyssa comes in and talks with Xavier. They also discuss Brent going up on the Block. She asks who will be the renom if Brent comes down but he doesn’t answer.

2:30 PM BBT – Sarah comes in. She doesn’t want Britini up and suggests it’ll just upset the Jokers. She wants to see Whitney up against Brent.

2:45 PM BBT – Tiffany lets Xavier know that Azah is upset with him about this plan. She’s frustrated that Azah is playing so personal.

2:55 PM BBT – Azah is meeting with Xavier and doesn’t like what’s going on. She wants X to put her up instead of Britini. X asks if she’s loyal to her team or the Cookout. Azah says she’s loyal to the Cookout but she wants him to put up two Aces and no Jokers.

3:15 PM BBT – Tiffany camtalks that she knows some HGs are not happy that she won the WC but she’s okay with that. She says she’ll keep playing without emotions.

3:20 PM BBT – Britini has her turn in the HOH room with Xavier. She’s confused because she thought they were going to team up against DX instead of that happening to her. Xavier says he needs to keep Brent calm.

3:25 PM BBT – Xavier explaining the plan is to put her (B) or Azah up against Brent so he’s comfy.

3:30 PM BBT – Britini suggests Whitney as a threat to consider.

3:50 PM BBT – Kyland is meeting with Xavier now. X says he will not nom Azah even though she suggested that over Britini. Xavier says they can keep Whitney calm this week and go for her next week. He’s not willing to risk their six in the Cookout.

4:05 PM BBT – Azah lets Britini know she pushed to keep her (B) off the Block. Britini wants her to go talk to Xavier again.

It’s rarely easy to make those noms and Xavier handled it well but when your own allies start giving you grief for the moves you think are keeping them safest then it gets messy fast. Watch for more action on the Feeds with fallout from the Noms ahead.