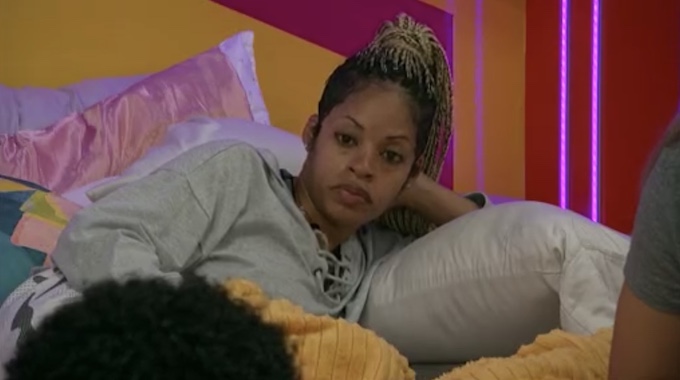 10:30 AM BBT – Derek F tells Kyland that he doesn’t want to win HOH, but doesn’t know what he would do next week if he did. He says he would probably put up one from each side and Kyland tells him that would give them the most options. Kyland tells DF that he got lucky because someone self destructed their own game.

10:35 AM BBT – Kyland and DF agree that Whitney and Brent can’t win HOH next week.

11:02 AM BBT – Frenchie says he has one last request from the house. He wants the Veto to be used on Britini so that a man can be on the block against him so he can go out like a champ. He says going out against Britini is too easy. DF tells him to go talk to the HOH.

11:10 AM BBT – Frenchie is going over his veto speech with Britini. He says that he isn’t going to say anything negative in his speech at all.

11:15 AM BBT – Frenchie asks the HGs if they have anything they want to give to him to donate to Hearts of Reality to be auctioned off for Give Kids the World. Derek X gives him a pair of shorts.

11:20 AM BBT – Frenchie goes up to the HOH to tell Kyland that he is collecting things for Hearts of Reality.

11:36 AM BBT – Kyland says that he is worried about Azah and Britini winning the next HOH. Claire says that she thinks that they won’t be looking at him, but Tiffany says that it might be someone they are working with.

11:40 AM BBT – Kyland tells Tiffany and Claire that he is going to let everyone know that he prefers DX doesn’t use the Veto.

11:50 AM BBT – Kyland tells Frenchie that there is still a lot of time before eviction night so nothing is set in stone. Frenchie tells Kyland that he feels like him and Kyland have a good friendship and adds that if he ever won HOH again, he would never put Kyland up again.

11:55 AM BBT – Kyland tells Frenchie that he would like to know the two votes and Frenchie tells him that he can tell him one, but the other he would have to talk to first.

1:22 PM BBT – Feeds are back from the Veto Meeting. Derek X did not use the Veto.

1:27 PM BBT – Brent tells Kyland that he respects the way that Kyland has run his HOH reign and adds that he has Brent’s trust until he gives him a reason not to. Whitney says that he (K) hasn’t come up in any conversations.

1:35 PM BBT – Derek X tells Kyland that he is curious about who the Kings are looking to target because that would be the deciding factor on whether or not he throws anything to them. Kyland tells him that everyone he has talked to is targeting the same person next week.

1:40 PM BBT – Xavier, Alyssa, Sarah Beth, and Christian all tell Kyland that he and his team are safe with them next week. Kyland tells them what Derek X said on his way out of the HOH just a few minutes ago and they all agree that Derek X would also be safe if he threw the next HOH to them.

1:55 PM BBT – Frenchie tells Britini that he really didn’t want to be on the block against her. He tells her that he doesn’t plan to campaign against her and he encourages her to do everything she can to stay.

2:00 PM BBT – Alyssa and Kyland talk a little and they both agree that DX can’t win the next HOH because it will make him a bigger target.

2:03 PM BBT – Alyssa confirms to Xavier and Christian that when she talked to Kyland she asked if they should still act like they are in the Slaughterhouse and he said yes. Adds that if it’s Claire, Tiffany or SB left in the HOH to throw it to one of them if they can. However, they can win it if they need to.

2:15 PM BBT – Frenchie tells DX that this game is so much harder than he thought it would be. Frenchie also made it known that he isn’t mad at DX for not using the Veto.

2:40 PM BBT – Frenchie tells Kyland that he told Britini not to be upset with him and explains that he is also not upset with Kyland. Frenchie says that he hopes that moving forward he thinks that the Queens and Jokers should work together going forward since they each only have three people.

2:50 PM BBT – Frenchie tells Kyland that he doesn’t want to talk game anymore, he wants to enjoy the last few days he has inside the house. He just wants to have fun and enjoy the time he has left. Frenchie just asks for one pity vote and Derek F said that he will do it and he’ll say it right in front of Britini.

2:56 PM BBT – Frenchie tells the rest of the Jokers and Kyland how ridiculous it is that everyone votes with the house and that people should vote based on what’s better for their game (this sounds a lot like a campaign). Azah brings up how everyone is so worried about the two votes against Alyssa last week, but she couldn’t care less.

3:00 PM BBT – Tiffany, Claire, and Hannah are talking in the backyard about Frenchie’s terrible gameplay. Claire says as a superfan, he should have known better.

Frenchie knows that he is going to be voted out, he just hopes that the GBM and speeches are respectful because his kids are going to be watching. He has also asked for one pity vote so that he doesn’t go out unanimously in week two and Derek F has agreed to do that for him. There might be a lot of game left to play this week, but it doesn’t seem like anything is going to help Frenchie’s case.