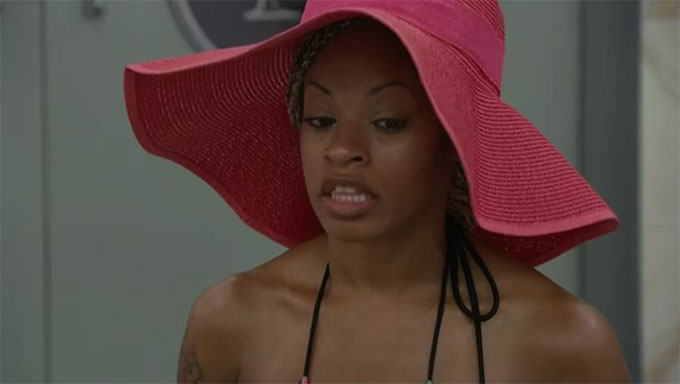 It was a relatively quiet Sunday in the Big Brother 23 house as once again the target has pretty much accepted their fate and the other houseguests started looking at who should be looked at next week. Read on to find out what happened on the Live Feeds on Sunday.

11:25 AM BBT – Tiffany camtalks that she wants Sarah out.

11:50 AM BBT – Whitney has decided she’ll campaign to get the Veto used. She’s glad she only has to convince one person since Christian holds all the power.

11:55 AM BBT – Whitney tells Britini that it’s unlikely she’ll be able to stay over Hannah because of her better social game.

1:00 PM BBT – Tiffany warns Hannah to dumb down what she says she knows about the game and this season (days and events). Tiffany says Christian will take everything back to Alyssa and warn her that she (H) knows all the days.

3:00 PM BBT – Kyland talks with Sarah in the Storage Room. They want to stick with the Royal Flush for a little longer. Sarah says she’d go after DX in a DE if she wins HOH. She’s also worried about Xavier. Sarah says Hannah told her she (H) threw the HOH comp to Xavier.

3:20 PM BBT – Sarah has continued to talk about her worries over Hannah and says they need to win HOH, not her (H). Kyland has assured her he’s good with Hannah going home in a few weeks.

3:35 PM BBT – Tiffany asks DF who he wants out and he says Alyssa but Tiffany doesn’t give a name.

4:15 PM BBT – Azah is teaching HGs how to do a pageant and walk proper for it.

4:25 PM BBT – Tiffany trying to make DX think that Sarah is there as an America’s Player because she’s dull and HGs usually have a personality.

5:15 PM BBT – Alyssa talks with Hannah that she would have done the noms differently than Christian did. She wishes he had put up a bigger target next to Whitney. Hannah says she probably would not use Alyssa as a pawn next week.

5:20 PM BBT – Alyssa points out to Hannah that she’s identified as a duo with DX and since her and Christian are also seen as a duo they should stick together. Alyssa says they can win all the comps.

5:35 PM BBT – Hannah wants to know if Sarah was pushing for her to be targeting. Alyssa will only tell her that she (S) wasn’t opposed to it.

6:00 PM BBT – Tiffany is now working on Xavier to convince him that Sarah is America’s Player.

6:02 PM BBT – Tiffany says SB is way too smart and is playing her game very low-key. Tiffany says if SB wins HOH she’s going after Hannah. Derek X says he’s afraid if he takes a shot at SB the other Kings will go after him.

6:35 PM BBT – Claire talking with TIffany again about Sarah and wanting to get her out next week.

8:02 PM BBT – Derek F asks Xavier how he would feel if he put up SB and Hannah. Xavier says as long as Hannah doesn’t go he doesn’t care. X says if someone from his team has to go, it has to be SB.

8:06 PM BBT – Now X is trying to sway DF away from a Sarah pawn. He says it would almost have to be SB and Alyssa. DF says he’s too scared to do that to Alyssa. Xavier says Hannah could go home sitting next to SB.

8:11 PM BBT – Derek F asks if SB comes down who would go up next to Alyssa. X says it would have to be Christian and Christian goes home. Derek F sounds terrified of this idea.

8:40 PM BBT – Derek F says he’s just really afraid if he takes the shot at Alyssa and Christian, it’ll come back to bite him the following week.

8:45 PM BBT – Derek F is worried another guy will go home next week if a woman wins HOH. Christian says a guy is going to win HOH.

8:47 PM BBT – DF says there will be a majority of women in jury and the guys won’t want to be sitting next to a woman in the Final 2.

9:45 PM BBT – Hannah promises DF that she would not nominate any of the Cookout.

10:45 PM BBT – Few HGs start heading out to their makeshift club. DF is the security bouncer.

11:00 PM BBT – Houseguests are outside for the Nightclub event they set up on the backyard balcony.

12:40 AM BBT – Xavier is observing that Kyland and Sarah seem to have a lot of energy between them. He thinks they’d be together now if Sarah didn’t have someone back home.

1:05 AM BBT – Whitney is making a pitch to Christian upstairs. She promises she would work with Christian and the Kings and if she stayed. Christian says he’ll consider putting up DX as a renom.

1:15 AM BBT – Christian tells DF that Whitney campaigned to him but it did not change his mind.

1:30 AM BBT – Alyssa talks with DX about her proposal for the duos to work together. She wants to get Hannah closer to them.

1:40 AM BBT – Xavier tells DF that Kyland and Sarah are getting very close but DF is sure Kyland will come back to them.

2:05 AM BBT – Alyssa and Christian were in bed together upstairs in the dark when Britini comes up and knocks. Alyssa scrambles and tries to say she was just helping Christian with his speech for tomorrow. Britini offers to help him with a rap. After she leaves Alyssa is stressed because she didn’t have any pants on and now has to go sleep downstairs.

2:15 AM BBT – Tiffany again working the America’s Player angle about Sarah, this time trying to convince Hannah of it. Hannah wonders if Kyland and Sarah are paired as America’s Players.

2:40 AM BBT – Tiffany and Hannah plan to get out Sarah then Britini and then Christian & Alyssa.

3:00 AM BBT – Tiffany worries that Kyland would take Sarah to F2 over the Cookout. She says she asked him his plan to get their six to the end but he didn’t have one. Tiffany thinks he has a plan to get Sarah there though.

Whitney gave it a brief shot to convince Christian to save her with the Veto on Monday but it didn’t move the needle. She remains the top target for Thursday. Meanwhile, the HGs had fun tonight playing their BB Beach Club in the backyard so that was a little diversion from the game for them. Now back to the scheming.