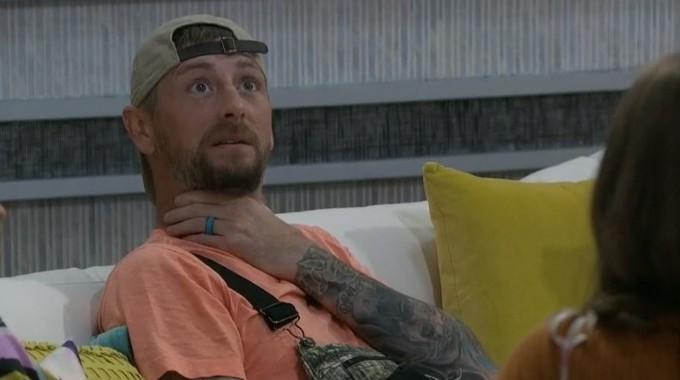 It’s always good to have a superfan on the show, so when we all heard that Brandon “Frenchie” French was headed to the Big Brother 23 house, we were a bit excited to have someone who not only reads this website but interacts with us on Twitter.

For the past several years we’ve seen him talk about how he would play the game if he ever got on. We’ve seen him make friends with past players like Rockstar and James Rhine, who are both rooting him on now along with other players like Janelle and Evel Dick.

Frenchie always said he would want to win the first Head of Household (check) and that he would target the bros (check – we think). What we didn’t know, however, was that Frenchie also wanted to makes alliances – and lots of them. This is where we get nervous because as we’ve seen in the past, big fans of the show tend to get in that house and try to make too many moves way too fast, or just aren’t able to put their money where their mouths are. I’m not going to name names, but we’ve seen it a lot.

For a little while, we thought Frenchie was going to be different. First of all, he picked a great team in that schoolyard pick, so we were able to overlook the fact that he won two competitions on night one and THEN, thanks to Julie, won another one just for fun (side note: I would have thrown that one since it didn’t count). And then he started to talking to people like Tiffany, Claire and Derek F, and that really got us excited. And we got even more excited when he said as the first Head of Household he was going to go after the bros/jocks and any sort of budding showmances. Now those are plans we can definitely get behind. Frenchie really is going to be different, we thought.

But then the newbie haze took over. Everyone loves everyone and everyone wants to work with everyone. And before we knew it, Frenchie had told almost everyone they were safe and started making alliances left and right. So let’s take a look at how these alliances look at the moment. At least how I THINK they look. There has been a lot going on in just the past 19 hours or so.

Frenchie’s main alliance would be called Slaughterhouse. After talking to a couple of other players like Britini, they thought seven would be a good number. And then he wants a core four from that. And while Britini would like that four to be their schoolyard pick team (herself, Frenchie, Derek F, and Azah), Frenchie started forming his own thing with Xaiver, Whitney, and maybe Kyland.

But then we have to remember that Frenchie already talked to Claire, Hannah, and Azah about a Slaughterhouse alliance. And then Frenchie and Whitney talked to Tiffany about a parents alliance thing. His your head spinning yet? Mine is.

So at one point Frenchie definitely said Brent was his target but there were talks of a backdoor plan for him. But today, on the Live Feeds, Brent pulled some smooth moves, and seemingly got Frenchie off his radar, and even struck up a deal to keep Frenchie safe next week if he is safe this week.

If you’re doing the math, that pretty much leaves Christian, Travis and Derek X as options this week. Unless he decides to change his mind on Brent, I’m starting to think Christian could be the target this week, especially after Brent threw Christian under the bus to Frenchie.

So now that we’ve look at all of what’s been going on, we can answer our own question: How is superfan Frenchie doing? Well on paper, he’s doing great. Everyone seems to love him and he’s working with everyone, AND he’s going after the meatheads that always run the game. BUT we know this will all catch up to him. You just can’t go in the house and work with everyone. If you could get by with it, that would be a great strategy. But we know that’s not how it works out.

I do have to say, though, that it is just Day 2, and we usually don’t see all that goes on at this point because live move-ins are a new thing. We usually don’t see all the many alliances that form then fail before the first episode even airs and the Live Feeds kick-off. So that being said, we are thrilled we get to watch all of this play out! Please, Big Brother, do this every season, so we can witness all the madness! We love it.

Yes, it’s very early, but overall, Frenchie has done a great job. And he would be poised to win this game if it were only about two weeks long. But right now, we’re not sure he’s playing a long-form game. Time will tell if all of these alliances and those night one competition wins will affect his game.

What do you think about Frenchie’s game so far? Is he overdoing it, or actually coming in hot the way to play Big Brother?