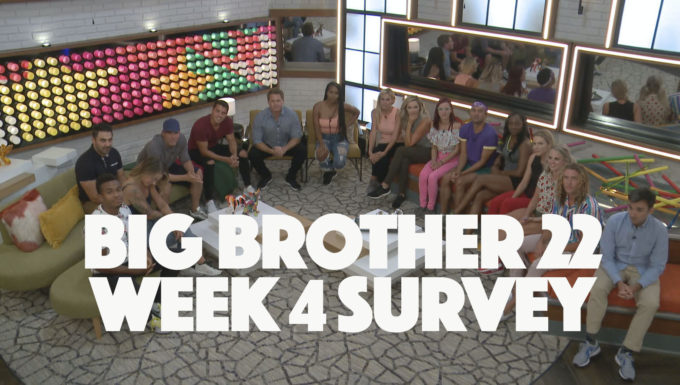 Last week’s favorite Big Brother 22 houseguest Janelle was sent packing, so it’s time to see who your new favorite player is in our Week 4 Survey.

I removed Janelle from the main poll and put her in the “Which Player do you miss the most” category, which she of course dominated. But now I’m curious how the evicted HGs stack up against the current ones, so next week I think I’ll add back in those evicted. That way we can keep track of how players could be looking in the America’s Favorite Player race later in the season.

OK, back to the results. For who you think is playing the best game, it’s Tyler who once again takes the lead. This week, Cody and Enzo trade places for second and third, however. Also, Dani drops and Christmas rises. Most everyone else stays around the same. The bottom player move up by default since there is one less player this week.

Now for the most popular houseguest. I really wanted to see if Janelle’s fans gravitated toward Kaysar or if Tyler’s fans could overrule him. And in the end, it was the former. Kaysar went from No. 3 last week to No. 1 this week. So Tyler maintains that second place spot. Tyler overcame Kaysar for a bit, but Kaysar still ended up with the most first-place votes. Tyler seems to be a lot of people’s second or third favorite, which gave him an overall average boost. If this was a direct VOTE FOR ONE poll, I think the margins would be broader. I actually might switch to that next week. This ranking poll is too difficult to analyze.

Christmas and Cody made substantial jumps in the popularity poll, and I’m not sure where that boost comes from. Any ideas?

For the second week in a row, the majority of voters aren’t happy with the HOH outcome. They would have preferred a Kaysar HOH win over Enzo, likely to shake up the game. BB fans like power shifts, and we haven’t had on in week 4, and there’s not one in sight.

As I already mentioned, Janelle is the most missed houseguest. She took almost 80 percent of the vote. Nicole A comes in second this week, though, because I imagine a lot of those who put Keesha in first place last week switched their votes to Janelle this week.

What what do people think of the season overall? It’s about the same average as last week. I dropped the possible star rating down to five from ten, and the average was close to the same. So you think BB22 so far is about 2.7 star season. That’s about as middle of the road as you can get. 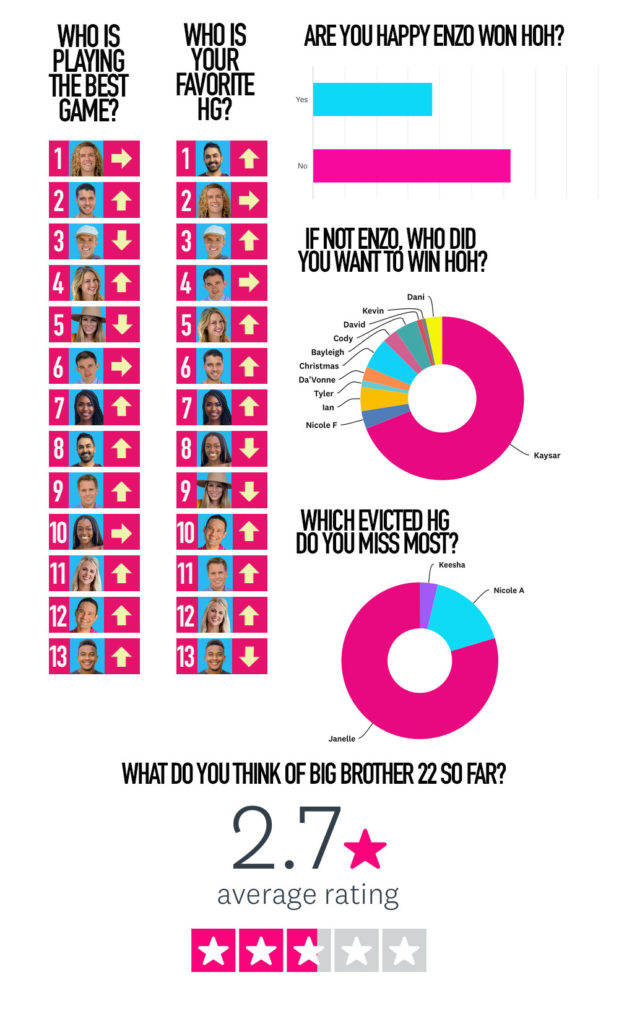