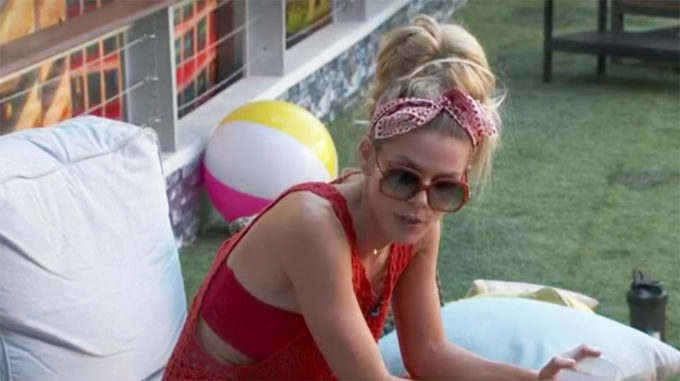 Big Brother 22 houseguests are facing a triple eviction this week, which is a first for the US franchise. We still aren’t sure how it will even work. After the initial eviction will there be two whole rounds  of Big Brother played out, or will it be one other round with three nominees and a vote to save? We just don’t know yet.

Regardless of the setup, though, there have been a lot of talks going around the house lately about who the next targets should be. And even though The Committee alliance is getting so close to steamrolling everyone out the door, their showing some major cracks, and those cracks could completely fracture this week during the triple eviction. That all being said, let’s take a look at who we think is most at risk this week.

First let’s start with the initial eviction. That’s pretty clearly going to be Kevin evicted. For the other two, I’m going to rank who I think is most at risk.

1. David. I know there have been talks of sidelining David’s eviction for bigger targets, but I still think he’s most at risk. If Cody has any say with this week, he’s going to keep the fun to a minimum, which means David will just be the next person to go.

2. Christmas. I think since literally everyone but Tyler is kind of over her, she could definitely be a triple eviction casualty. I’m thinking if anyone other than her or Tyler winning HOH could result in her eviction. Dani is over her. Cody is over her. Enzo is over her. Nicole is the only one not over her now, and that’s all because she thinks Dani will come after her if Christmas is gone. Apparently Nicole thinks Dani wants to be the last woman standing, which is kind of funny if you think about it. Anyway, this leads us to No. 3.

3. Dani. I think since Nicole is ready to backstab Dani, and Tyler has been ready to get her out for weeks, she’s in a lot of danger. Comp queen Dani better show up this week or she could be walking out the door either first or second.

4. Nicole. I really think the two evictions will be one of the first three, but if something wacky happens, Nicole could end up one of the casualties.

5. Tyler. Like Nicole, I think Tyler will most-likely be safe this week. I predict he even wins one or more of the competitions. But if everything aligns just right (or wrong, depending on how you look at it), he could be in trouble.

6. Memphis. I think Memphis will be looked at as a wasted eviction, but also if things get rocky, he could also be seen as pretty expendable.

7. Enzo. I don’t even expect Enzo to see the block. I think if things get super, super crazy he would still be safe. But not as safe as Cody.

8. Cody. What’s crazy about this is, to me, Cody should be the main target. He’s the outgoing HOH and can’t even compete in the first HOH. And he’s clearly in charge of everything. I would go after him in a second if everyone was on board. But that will never happen.

Based on our poll about this very topic, it’s looking like you guys think Dani might be most at risk, followed by Christmas and David. That does line up with my Top 3, but the order is just a bit different. Regardless, I think we will be seeing two of those three leave along with Kevin this week.

Who do you think will be the most likely evicted HGs to follow Kevin out the door? Vote in our poll below for who you think will go, not who you want to go, and then share your thoughts in the Comments section below! Then be sure to join us back on Thursday night at 8PM ET for our live coverage of the Triple Eviction excitement for BB22.