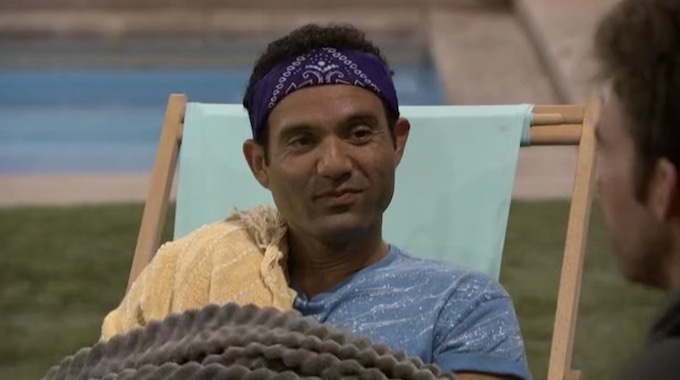 Monday night on the Big Brother 22 Live Feeds, we listened in on a conversation between Ian and Kevin where they tried to figure out who was at the center of the big alliance. In this conversation, they talk about how there is a core duo and then other HGs that feel comfortable with them and it branches off from there.

This conversation started at 10:10 PM BBT on cameras 1 & 2 with Kevin telling Ian that he is worried because there is a core that makes other HGs feel like they are a part of it. Ian tells him that there is a core duo and there are other groups that are attached to this core. Ian says that there are easily five groups that are linked to this duo and starts naming off the HGs that are part of these different alliances. He was able to piece together Cody, Nicole, Tyler, Enzo, David, and Dani within these different alliances that he named.

Ian and Kevin determined that Nicole and Cody are the core of all these groups and they have allies who have allies who think they are all safe. Ian said that he was already onto it, but the wall-yeller confirmed that Nicole and Cody were that core duo. Ian says that he wouldn’t go after Nicole if he won HOH and Kevin tells him that he would have to at least weaken that group. Kevin said at least one of the people from the core would have to be on the block.

Ian tells Kevin that if they don’t do anything, they will be gone in the next couple of weeks. They agree that they can’t throw each other under the bus if they expect to survive until the end. Ian and Kevin both think that David is going to be the next target if Bay or Day wins HOH. Ian thinks that if Cody, Tyler, or David win HOH then Day and Bay would be put up and Kevin thinks he might be in some variation of that. Ian agrees.

They are definitely on to something but have some kinks to work out over the next few days. Ian has strategically placed items in every room of the house so that he has an excuse to be there if he notices people congregating. This might do him some good as he and Kevin try to pinpoint some of the other targets the core alliance has in line for eviction. Ian also revealed to Kevin that Derrick had a hand in this when he put Cody and Nicole together pre-season.

What do you think of Ian and Kevin working together? Do you think that either of these two has a shot at weakening the core?